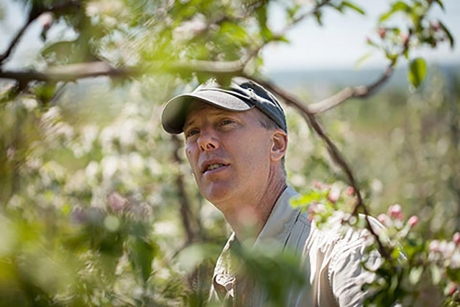 Bryan Danforth inspects apple blossoms and native pollinators at the Cornell Orchards.Photo credit: Jason Koski/Cornell University PhotographyJust such a leap is paying off now at Cornell Orchards in Ithaca, as researchers and managers from the Horticulture Section of the School of Integrative Plant Science and the Department of Entomology celebrate a solid spring pollination season for the site’s apple trees. While crisp apples and fresh cider are no strangers to fans of the 37-acre research and outreach site, this year’s crop provides an extra bonus for New York apple growers: proof that pollination can be done commercial honeybee free.

“This is a food security issue,” said entomology professor Bryan Danforth. “We need to know if growers can continue to produce food in the absence of honeybees.”

Populations of imported European honeybees, relied upon for centuries in American agriculture, continue to decline under pressure from an array of pathogens, parasites and other problems. Danforth said honeybee hive managers are seeing losses at 30 to 40 percent each year, with damages during the worst “colony collapse” years topping 70 percent. With that key agricultural resource insecure, apple growers in New York – the nation’s No. 2 apple-producing state – face a future of higher hive rental costs or limits on honeybee availability.

As one of the nation’s leading advocates for native bees as an agricultural asset, Danforth is among 11 faculty members who rely upon Cornell Orchards for research support. Since 2008, he and members of his lab have been surveying bee activity at 20 upstate orchards, including Cornell’s Ithaca and Lansing sites. His team has found more than 100 wild bee species at these orchards, far more than previously thought, with often surprising levels of diversity and abundance. Danforth’s group has detected a total of 26 wild bee species at Cornell’s Ithaca orchard alone.

“That’s why we conceived this whole crazy idea,” Danforth said.

That idea took flight during a walk through the Ithaca orchards in May 2014. Danforth and farm manager Eric Shatt were checking bee activity when, in addition to the honeybees from six rented hives, they noticed countless wild bees elbowing in for a meal – from mud-building mason bees and honeybee lookalike Colletes inaequalis to solitary carpenter bees and social halictids. They also spotted many species of Andrena, a mild-mannered ground nesting bee that “scrabbles” deep into flowers, a technique former Danforth Lab researcher Mia Park, M.S. ’06, Ph.D. ’14, demonstrated is four times more effective at pollinating than “side working” honeybees.

The two agreed to take a leap few large commercial orchards can afford: fly through the next apple blossom season on the wings of wild bees alone. A confident Shatt took the idea to the committee that oversees the orchards and, as Justine Vanden Heuvel, associate professor in plant sciences and committee chair recalled, the panel agreed jumping in to prove the concept was worth the risk.

“We’re the only people who can do it for Bryan,” she said, “and he’s doing amazing research, so we wanted to help him.”

It’s turned out to be a gamble that’s paid off for the orchards, Danforth and growers statewide. In the closing days of May, Shatt reported wild bees provided enough fruitlets to support a full crop this year.

“I think it is obvious that Bryan’s assumption that we have a strong enough wild bee population to adequately pollinate our crop is correct,” Shatt said. “The key now will be to keep our wild bees happy and support them.”

Which, according to Danforth, is where his work is going next.

While he’s quick to concede wild bees will never replace honeybees in massive agricultural settings, Danforth said research and fieldwork is proving wild bees can play a critical role in saving growers money, easing pressure on vulnerable honeybee hives, increasing sustainability and, most importantly, enhancing food security. His current work, such as the new study he co-authored with Park on the impact of pesticides on wild bee populations (see related story), will focus on exploring what keeps wild bee populations high. That will let Cornell promote best practices and develop assessment tools so growers know when they, too, can afford to take the leap.

“If you’re an apple grower and you want to make sure you can produce apples for the next 50 years, having the insurance that you have a diverse wild pollinator fauna in and around your orchard will be important,” Danforth said. “Making this industry more profitable and at the same time demonstrating the economic benefits of conserving wild pollinator diversity is a win-win situation for New York agriculture.”