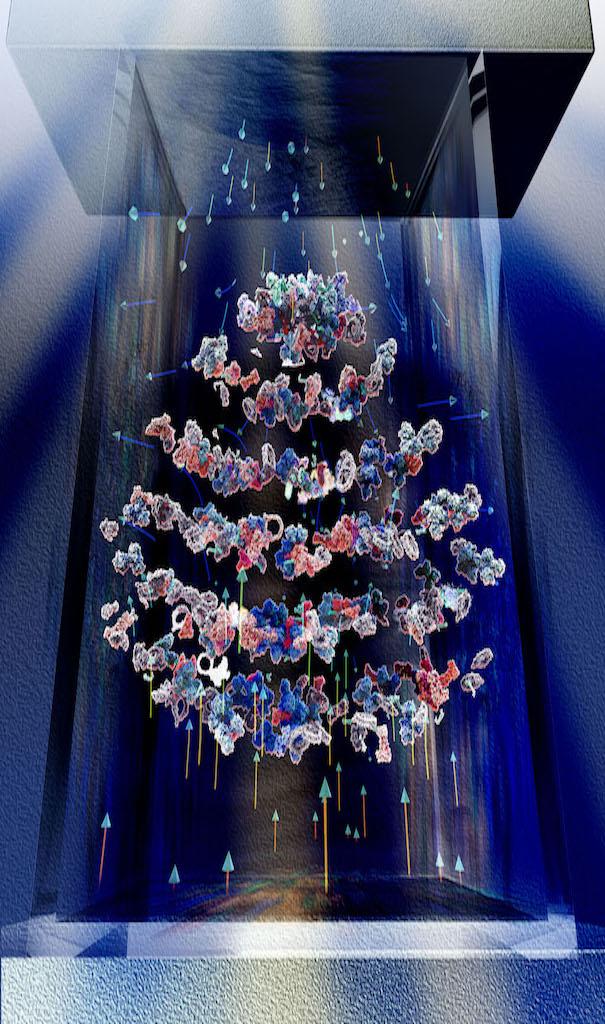 Proteins created specific shapes when they were levitated, like a "smiley face" of layers.
Michigan State University

EAST LANSING, MI — Researchers at Michigan State University's Precision Health Program have helped develop a fascinating new method for detecting the density of proteins in the blood—a method that could vastly improve the rate at which diseases are detected and diagnosed.

The method, called "magnetic levitation," or MagLev, had previously been used to separate different types of particles in solutions, arranging them in groups based on their relative densities rather than weight. Now, two new studies by Precision Health's Morteza Mahmoudi, assistant professor, and Ali Akbar Ashkarran, research associate, illustrate how the method also can be applied to human blood plasma—the liquid component of blood. Plasma contains many types of proteins that perform a multitude of functions in the body.

"When we put something in liquid, it separates into sediment by weight," Mahmoudi said. "But another force—the magnetic force—can cancel out weight and levitate the proteins. This permits us to much more precisely define the density of proteins in solution."

Being able to accurately measure the density of proteins in the body is important since proteins play important roles in both health and disease states. For example, lipoproteins transport fats to cells, antibody proteins play roles in immunity and coagulation proteins help blood clot. Current methods to measure density of proteins in liquid are unreliable and often destroy the fundamental properties of the proteins.

In the first study, published in Analytical Chemistry, the team applied the MagLev technique in a small tube containing magnetic nanoparticles into which plasma proteins had been introduced. Over a three-hour period, the team observed the emergence of a number of distinct bands representing various forms of proteins.

"The proteins created specific shapes when they were levitated," Mahmoudi said. "It looks like a 'smiley face' of layers."

Measuring the density of the bands, the team arrived at two noteworthy findings. The first was that there was no correlation between the density of a protein and its molecular weight, which came as a surprise since it goes against conventional thinking. The other was that the average density of proteins was much lower than previous studies had suggested.

The mechanism by which the proteins separate into layers by density isn't totally clear, but it may be due to structural differences and/or protein-to-protein interactions.

"The findings are of crucial importance, as protein density is being used to define proteins' physical properties, including their 3D structures," Mahmoudi said. "In addition, the accurate density of proteins enables us to design safer and more efficient therapeutic agents, such as nanomedicine."

So, the MagLev method isn't just a fun research tool—it has exciting clinical implications. The particular "signature" of an individual's plasma proteins might tell a doctor much about a patient's health status.

Indeed, this is what Mahmoudi and Ashkarran laid out in the second study, published in Advanced Healthcare Materials. They tested the MagLev method clinically by comparing the plasma of healthy people to that of people who abuse opioids. From image analysis, they found distinct and reliable differences in the spectrum of plasma proteins of healthy individuals and those who abuse opioids.

The method holds particular promise for diagnostics, a potentially lengthy process that can delay treatment. Mahmoudi said he and his team are currently working on using MagLev to identify other types of chronic disease, like multiple sclerosis and cancer, where accurate diagnosis is critical and in many cases lifesaving.

"There are four subtypes of MS, but diagnosis is currently based on the patient's behavior, symptoms, and his or her response to treatment," Mahmoudi said. "There is no biomarker or MRI test to diagnose the different subtypes at the early stages. Correctly diagnosing the type of MS is critical, since it dictates which type of treatment is appropriate. We hope this MagLev method will give clinicians a technique to define the subtypes."

The team is also looking at whether MagLev can be used in diagnosing cancer, where early detection can affect survival rates.

"If we can use the technique to detect cancer sooner, many more cancers could be treated successfully," Mahmoudi said. "Studies show that many types of cancers can be cured if they get detected at the early stages. The real problem is late detection."

- This press release was originally published on the MSU Today website