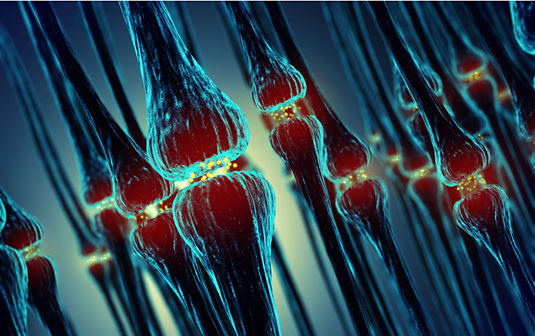 Learning is made possible by the fact that the functional connections between nerve cells in the brain are subject to constant remodeling. As a result of activation-dependent modification of these links (‘synaptic plasticity’), circuits that are repeatedly stimulated “learn” to transmit signals ever more efficiently. This process is thought to provide the molecular basis for learning and memory, allowing the information encoded in such networks to be recalled and exploited in novel situations. The primary targets for modification are the specialized receptor proteins in nerve-cell membranes that mediate the transmission of electrical signals between individual neurons. A team of researchers led by Dirk Trauner, Professor of Chemical Biology and Genetics at LMU, in collaboration with colleagues at the Institut Pasteur in Paris, has now synthesized a light-dependent switch that enables them to control the activity of a particular class of receptors which is crucial for the formation and storage of memories. The compound provides a powerful new tool for researchers interested in probing the mechanisms that underlie short- and long-term memory. The results appear in the online journal “Nature Communications”.

Individual nerve cells generally use chemical messengers to communicate with each other. These so-called neurotransmitters are released by specialized structures called synapses at the end of the signal-transmitting fiber (the axon) and diffuse across the synaptic cleft – the narrow gap that separates nerve cells from each other. The chemical then binds to receptors on the “post-synaptic” neuron. How the post-synaptic cell reacts is dependent on the nature of the neurotransmitter and the corresponding receptor. “In this context, the so-called NMDA receptor is very special,” says Laura Laprell, a PhD student in Trauner’s group and joint first author of the new study. “It is primarily responsible for the fact that we have the capacity to form memories and the ability to learn.”

Trauner and his colleagues have synthesized a chemical called azobenzene-triazole-glutamate (ATG), which acts as a light-sensitive neurotransmitter on NMDA receptors. With the aid of this tool, it is now possible, for the first time, to activate – and inactivate – these receptors with high specificity and precision in the laboratory. Moreover, in contrast to other optical switches, ATG does not permanently bind to the receptor, but diffuses freely in the synaptic cleft between pre- and post-synaptic neurons. “ATG is completely inactive in the dark,” Laprell explains, “and must be exposed to light before it can bind to the receptor and initiate depolarization of the post-synaptic cell.” In other words, in order to be activated, the nerve cells must first ‘see the light’. Subsequent irradiation with UV light inactivates ATG within a matter of milliseconds, thus enabling extremely precise control of receptor activation in the time domain.

Because light can be controlled with extraordinary precision, both spatially and temporally, it offers a highly versatile means of regulating biological processes. However, the spectral composition of the light must be taken into consideration, as light can also damage tissues. This explains why photoswitches that are activated by less energetic light rays with longer wavelengths are of particular interest. “And ATG fulfils this requirement: It is not only completely inactive in the dark – and therefore has no side-effects, it is also exceptional in that it can be activated with high precision by red light. For this purpose, we make use of ‘two-photon activation’, a state-of-the-art method in which the molecule is exposed to two low-energy light quanta in rapid succession,” Trauner explains. “Red light also has the advantage that it penetrates deeper into living tissue.”

The researchers expect that their new-found capacity to regulate the activation of NMDA receptors will lead to new insights into the mechanisms underlying synaptic plasticity and memory formation. NMDA receptors may also be involved in precipitating or exacerbating neurodegenerative diseases such as Alzheimer’s and Parkinson’s. “A better understanding of this class of receptors, coupled with the ability to control their activity, is therefore of great interest in this context too,” Trauner points out. “We are now cooperating with other groups who want to use ATG specifically to understand the role of these receptors in neurodegenerative conditions.”