Video showing the bio-bots' assembly and walking courtesy of the University of Illinois.

CHAMPAIGN, Ill. — A new class of miniature biological robots, or bio-bots, has seen the light–and is following where the light shines.

The bio-bots are powered by muscle cells that have been genetically engineered to respond to light, giving researchers control over the bots’ motion, a key step toward their use in applications for health, sensing, and the environment. Led by Rashid Bashir, the University of Illinois head of bioengineering, the researchers published their results in the Proceedings of the National Academy of Sciences.

“Light is a noninvasive way to control these machines,” Bashir said. “It gives us flexibility in the design and the motion. The bottom line of what we are trying to accomplish is the forward design of biological systems, and we think the light control is an important step toward that.” 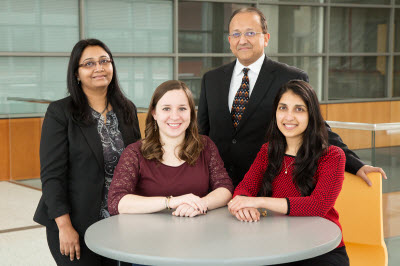 Researchers at Illinois developed the miniature biological robots. Pictured from left: research professor Parijat Sengupta, graduate student Caroline Cvetkovic, professor Rashid Bashir and graduate student Ritu Raman.Photo by L. Brian StaufferBashir’s group previously demonstrated bio-bots that were activated with an electrical field, but electricity can cause adverse side effects to a biological environment and does not allow for selective stimulation of distinct regions of muscle to steer the bio-bot, Bashir said. The new light-stimulation technique is less invasive and allows the researchers to steer the bio-bots in different directions. The bio-bots turn and walk toward the light stimulus, Bashir said.

The researchers begin by growing rings of muscle tissue from a mouse cell line. The muscle cells have a gene added so that a certain wavelength of blue light stimulates the muscle to contract, a technique called optogenetics. The rings are looped around posts on 3-D-printed flexible backbones, ranging from about 7 millimeters to 2 centimeters in length.

“The skeletal muscle rings we engineer are shaped like rings or rubber bands because we want them to be modular,” said graduate student Ritu Raman, the first author of the paper. “This means we can treat them as building blocks that can be combined with any 3-D-printed skeleton to make bio-bots for a variety of different applications.”

In addition to the modular design, the thin muscle rings have the advantages of allowing light and nutrients to diffuse into the tissue from all sides. This contrasts with earlier bio-bot designs, which used a thick strip of muscle tissue grown around the skeleton. 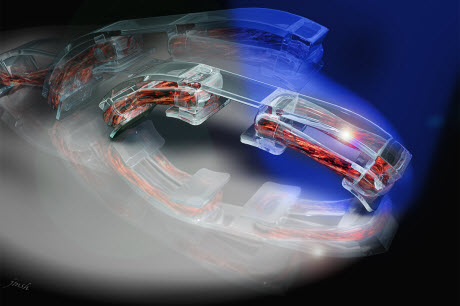 A new class of muscle-powered walking bio-bots responds to light and has a modular design.Image credit: Janet Sinn-Hanlon.The researchers tried skeletons of a variety of sizes and shapes to find which configurations generated the most net motion. They also exercised the muscle rings daily, triggering the muscle with a flashing light, to make them stronger so that the bots moved farther with each contraction.

“This is a much more flexible design,” Bashir said. “With the rings, we can connect any two joints or hinges on the 3-D-printed skeleton. We can have multiple legs and multiple rings. With the light, we can control which direction things move. People can now use this to build higher-order systems.”

This work was part of the Emergent Behaviors of Integrated Cellular Systems project, funded by the National Science Foundation. EBICS received a five-year, $25 million renewal in fall 2015, allowing Bashir and colleagues to continue to develop bio-bots technology for a variety of applications in diagnostics, medicine and sensing.

Bashir also is affiliated with the Micro and Nanotechnology Laboratory, the departments of electrical and computer engineering and of mechanical science and engineering, the Frederick Seitz Materials Research Laboratory and the Institute for Genomic Biology at the U. of I.