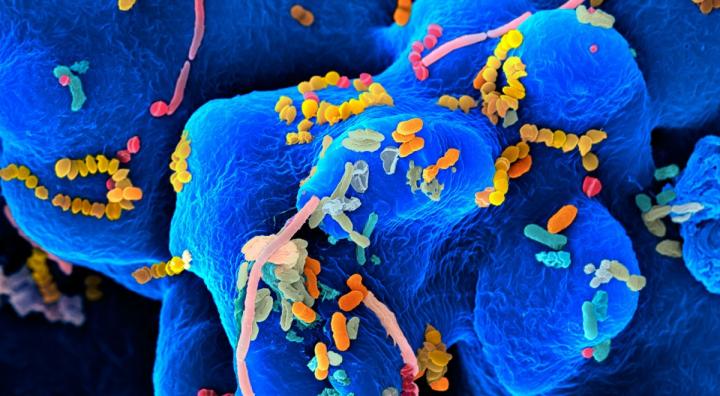 Researchers find age and sex of an individual strongly influences the bacterial diversity of the gut microbiome.UC SAN DIEGO HEALTH

The human gut microbiome is a complex microbial ecosystem that plays an important role in our health. For example, these microbes -- bacteria, viruses, fungi -- help regulate metabolism, fend off infections, produce essential vitamins and break down dietary fiber. They may also be biomarkers of health and disease.

A recent study by researchers at University of California San Diego School of Medicine, San Diego State University and the Max Planck Institute for Developmental Biology found that the age and sex of an individual strongly influences the bacterial diversity of the gut microbiome.

The study, published online May 14, 2019 in mSystems, found younger age is positively associated with gut bacterial diversity in both men and women, but young women display greater biodiversity than young men.

"It is well known that the microbiome changes from childhood to adulthood. We wanted to look at changes that happen in adulthood, from young adults to middle-aged adults, and if those changes are influenced by sex and age," said senior author Varykina Thackray, PhD, associate professor in the Department of Obstetrics, Gynecology and Reproductive Sciences at UC San Diego School of Medicine. "Our findings show a woman's microbiome may be more diverse than a man's and mature sooner."

Greater microbial diversity in the female gut may be associated with sex hormones. "Our results suggest that, because girls go through puberty earlier than boys, the microbiome of men may need time to catch up," said Thackray, who is also a faculty member in the Center for Microbiome Innovation at UC San Diego.

The research team analyzed the gut bacterial diversity of approximately 8,900 adults, ages 20 to 69 from four geographic regions: the United States and United Kingdom -- part of the American Gut Project citizen-science initiative based at UC San Diego -- and two independent cohorts from Colombia and China.

In terms of age, researchers found that in the U.S., U.K. and Colombia cohorts, bacterial biodiversity correlated positively with age in young adults (ages 20 to 45) but plateaued around age 40, with no positive association observed in middle-aged adults (ages 45 to 69).

"We were intrigued to see that the differences we detected between men's and women's microbiome in young adulthood were less obvious in middle age," said Thackray. "One way of thinking about this is like the growth of plants in a newly cleared field. Over a period of time, a diverse ecosystem of plants would become established and grow in the field until no more space was available. Our study suggests that the human gut microbiome continues to diversify until age 40 or so when it seems to plateau, as opposed to continuing to become more and more diverse over a lifetime."

Of note, researchers found little association of biodiversity with age or sex in the Chinese cohort. "The idea that sex and age play a role in microbiome diversity may not be universal. There is a lot more work that needs to be done with future longitudinal studies to understand the effects of factors like puberty, steroid hormone levels and hormonal contraceptives on diversification of the gut microbiome during adolescence and young adulthood," Thackray said.