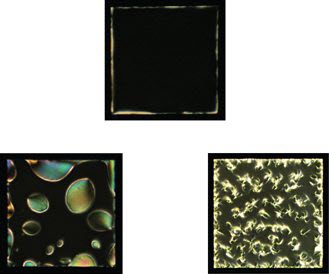 These magnified images show how untreated liquid crystals (top) respond to the human islet amyloid peptide (lower right), which forms aggregates and is involved in diabetes; and rat islet amyloid (lower left), which does not aggregate. The actual width of these panels is 280 microns, approximately the diameter of several human hairs lying side by side.Courtesy of Advanced Functional Materials, Sadati and othersLiquid crystals are familiar to most of us as the somewhat humdrum stuff used to make computer displays and TVs. Even for scientists, it has not been easy to find other uses.

Now a group of researchers at the University of Chicago’s Institute for Molecular Engineering is putting liquid crystals to work in a completely unexpected realm: as detectors for the protein fibers implicated in the development of neurodegenerative diseases such as Alzheimer’s. Their novel approach promises an easier, less costly way to detect these fibers and to do so at a much earlier stage of their formation than has been possible before—the stage when they are thought to be the most toxic.

“It is extremely important to develop techniques that allow us to detect the formation of these so-called amyloid fibrils when they’re first starting to grow,” said Juan de Pablo, whose group did the new work. “We have developed a system that allows us to detect them in a simple and inexpensive manner. And the sensitivity appears to be extremely high.”

Amyloid fibrils are protein aggregates that are associated with the development of neurodegenerative diseases, including Huntington’s, Parkinson’s, Alzheimer’s and mad cow disease, as well as in Type 2 diabetes, where they damage the pancreatic islets. Scientists would like to be able to study their formation both for therapeutic reasons and so they can test the effect of new drugs on inhibiting their growth. But the fibrils that are believed to be most harmful are too tiny to be seen using an optical microscope. So scientists have relied on elaborate and expensive fluorescence- or neutron scattering-based techniques to study them.

The de Pablo group took a completely different approach. They exploited the way a liquid crystal responds to a disturbance on its surface. The scientists made a film of a liquid crystal molecule called 5CB, which de Pablo calls the “fruit fly” of liquid crystal research because it is so well studied. Then they applied chemicals to the 5CB film that caused the molecules to align in such a way as to block the passage of light. Floating on top of the film was a membrane made of molecules resembling those found in the membranes of biological cells. And on top of that was water, into which the scientists injected the molecules that spontaneously form the toxic aggregates.

“As aggregates grow on the membrane, they imprint their shape into the liquid crystal underneath,” said de Pablo, the Liew Family Professor in Molecular Engineering. “The liquid crystal molecules that are at the interface become distorted: they adopt a different orientation, so that light can now go through.”

This disturbance on the membrane—the imprint of the protein fibers—is transmitted down through the liquid crystal film, in effect amplifying it.

The fibers might be tens of nanometers in diameter and a hundred nanometers long, far smaller than a red blood cell. But the disturbance they create is magnified by the liquid crystal so that it is large enough to be seen in polarized light with a simple optical microscope.

The work of de Pablo’s team was published online Sept. 9, 2015, by the journal Advanced Functional Materials. Co-authoring the article were IME scientists Monirosadat Sadati, Julio Armas-Perez, Jose Martinez-Gonzalez, and Juan Hernandez-Ortiz, as well as Aslin Izmitli-Apik and Nicholas Abbott of the University of Wisconsin at Madison.

They relied crucially on theoretical molecular models, both to help guide them through the real system and to help them understand what they were seeing. They are now developing sensors for the amyloid fibrils that may allow experimenters to use droplets of liquid crystals in emulsion rather than the flat surfaces used in the proof-of-concept experiments.

That, said de Pablo, would be a lot easier for people to use. He envisions scientists eventually being able to test small samples of blood or other body fluid using the new detectors, or for drug researchers to put the amyloid proteins in water, inject their drug, and study how the drug influences the growth of the aggregates over time.

“For research in Type 2 diabetes, or Alzheimer’s or Parkinson’s, having this simple platform to perform these tests at a fraction of the cost of what’s required for fluorescence or neutron scattering would be very useful.”