Living mulch functions like mulch on any farm or garden except—it’s alive. No, it’s not out of the latest horror movie; living mulch is a system farmers can use to benefit both profits and the soil. While the system has been around for a while, scientists at the University of Georgia are making it more efficient and sustainable. 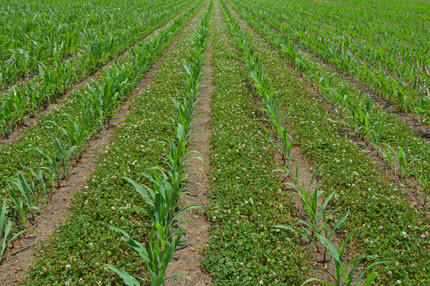 Corn growing in the living mulch system. Clover continues to grow until the corn is tall enough to intercept about 40 percent of the incidental light.Photo credit: Nick HillThe living mulch system uses a perennial plant between rows of crops. In their work, the Georgia researchers used white clover between rows of corn. White clover is a legume and can supply nitrogen fertilizer to the crop.  The idea is that each planting season, farmers remove a portion of the clover and plant the row crop in that spot. While the corn grows, there is then clover between the rows serving as living mulch.

Ideally, after the corn is harvested, the clover takes over the whole field and the cycle starts again the next growing season, with the farmer removing portions of the clover to plant corn. However, this process isn’t perfect and often the living mulch fails to fully re-establish. The scientists in Georgia are working to change that.

“We chose white clover particularly to use as living mulch because it has the capability to regrow and reestablish itself when the conditions are right, and to perpetuate itself from year to year,” says Nicholas Hill, lead researcher. “We wanted to start defining what the conditions were from the standpoint of agricultural practices that could help the clover regrow year-to-year in a corn production system.” 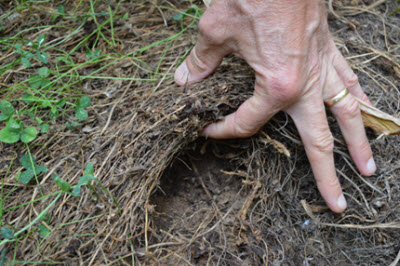 A significant thatch layer builds from the declining clover as the season progresses. The thatch decomposes and nitrogen becomes available for corn nutrition.Photo credit: Nick HillThe scientists mainly looked at two different variables: how wide of a band of clover to spray with herbicide and then how wide to make the rows of corn. They found the ideal band to spray with herbicide was 20 cm (8”) wide and the ideal crop row width was 90 cm (36”).

“The whole idea is to strike a balance between having the clover be able to reestablish, preventing it from outcompeting the corn, and being able to produce enough corn to make a profit,” explains Hill. “In wider rows, more light penetrates the corn to get to the clover later in the year and it can persist a little longer, while in narrow rows it doesn’t. And then if we spray too much of the clover to plant the corn, it won’t be able to reestablish after harvest. But if we spray too little it’ll outcompete the corn in the rows.”

Getting this balancing act right can be very beneficial to the cover crop (the clover), the row crop (the corn), and the farmer. When spacing conditions are ideal, the shading characteristics of the corn over the clover control the nutrient release of the clover to the corn. The clover responds to shade by dropping its leaves onto the soil. Those decompose and add nutrients to the soil that the corn can use. Hill describes it as a time-release capsule of fertilizer. That means less applied fertilizer from the farmer. 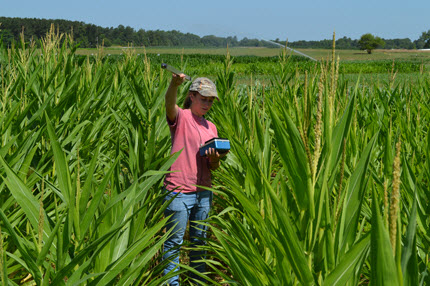 Ali Hintz takes corn height measurements. Photo credit: Zack SandersFurthermore, the ideal combination of conditions prevents the clover from outcompeting the corn but doesn’t do so much damage that when the corn is gone the clover can’t take over the field after the growing season. The researchers’ goal was to get up to 100 percent clover cover, and they were able to achieve that.

The researchers found the living mulch system does produce a little less corn than more conventional systems. However, the cost savings from the system outweigh the lower production. Hill reports that they applied 75-80 percent less herbicide to the field, thanks to the clover outcompeting harmful weeds, and less nitrogen fertilizer because of the nutrients the corn gets from the clover. So the farmer can end up making more money.

“Living mulch is the best thing since sliced bread,” Hill says. “We are seeing a lot of benefits. It can benefit the corn, the soil, and the business, so it’s really a win-win-win situation we’re trying to scale up for farmers to use. We are beginning to study and document all of these benefits and will continue to carry out research on living mulch.”

Read more about this research in Agronomy Journal.