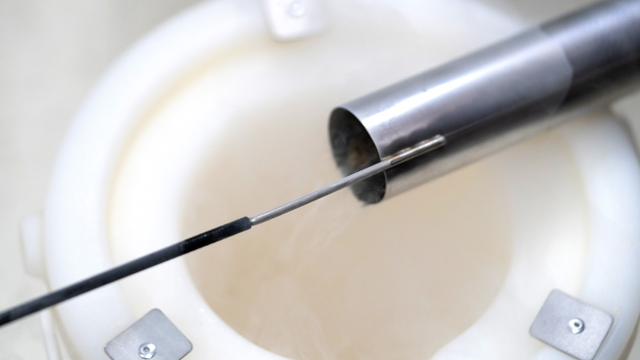 VIENNA — Despite a time limit imposed in many countries on the freeze-storage of sperm, a new study from China has found that the long-term cryopreservation of semen in a sperm bank does not affect future clinical outcomes. Results of the study are presented today in Vienna at the 35th Annual Meeting of the European Society of Human Reproduction and Embryology (ESHRE) by Dr. Chuan Huang of the Changsa-Hunan Sperm Bank in China.

The study first found that the frozen sperm's survival rate after thawing did decline over the 15 year study period—from 85 percent to 74 percent survival. However, this decline made little difference to the pregnancy and live birth rate in women using these samples for donor insemination, with cumulative live birth rates of 82.17 percent, 80.21 percent, and 80.00 percenr in the three storage groups respectively. Success rates were similarly comparable when the frozen sperm samples were used in IVF, with live birth rates of 81.63 percent, 79.11 percent, and 73.91 percent in the three groups.

The authors stress that these very high success rates were achieved with screened donor sperm, which is not necessarily representative in quality of sperm from the general population. "Donors at our sperm bank must be in good health according to physical examination and psychological evaluation and have no familial history of a genetic disease, so I think these live birth rates are appropriate," said Dr. Huang. However, she added, the implications of the study remain, "that the long-term storage of sperm does not appear to affect live birth rates."

There have been at least two reports in the medical literature on successful pregnancies using human semen stored for longer than 20 years, the first from the UK after 21 years storage, and the second from the US after 40 years storage.

However, many regulatory authorities set a time limit on sperm (and egg) storage of ten years, with longer exceptions for medical reasons (such as for fertility preservation ahead of cancer treatment). But the literature offers no clear explanation for any these time limits. Some andrologists suggest that at the time the limits were set there was a fear that the sperm cells might be at risk of DNA damage, but there has been no evidence of that.

Dr. Huang reports that the regulations governing China's 26 sperm banks set no limit on the duration of semen storage, although the screening of sperm donors and semen is conducted strictly according to guidelines of the Chinese Ministry of Health—for sperm quality (concentration, motility) and infection. All samples must be cryopreserved for a minimum six-month quarantine prior to rescreening for HIV.

Nevertheless, because this study found a small but statistically significant decline in sperm survival rate over the 15-year study period Dr. Huang and colleagues do recommend that "sperm banks should provide sperm in their order of cryopreservation." Many studies have shown that some sperm cells do not survive the freezing and thawing process.