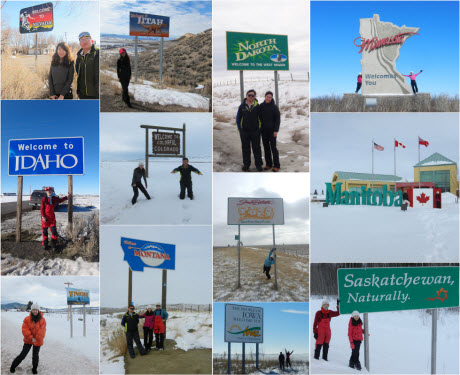 The UW team collected hundreds of samples from 67 places in the U.S. and Canada.University of WashingtonDuring the campaign that went from late January to late March 2013, the group traveled some 9,600 miles. They sampled snow in 13 American states and three Canadian provinces, and got stuck only twice.

Before leaving Seattle they bought a pickup truck that could hold four passengers and gear. The team headed south to Oregon, across the Rockies and down to Colorado, then did a big loop through the Dakotas and Minnesota before crossing the border to Manitoba, Saskatchewan and Alberta. Each night UW investigators Sarah Doherty and Stephen Warren would check federal snow maps to decide where to go to find the best snow the next day.

The hardest site was Churchill, Manitoba, on Hudson Bay. They could not reach it by road and instead took the train. Then they trudged into a -30 F headwind, keeping an eye out for polar bears, to reach their designated site.

For most of the trip they traveled in a team of three, each sampling a separate part of the pit to get an average reading for each location. Cutting the snow was done with small spatulas and felt like cutting a cake, said Cheng Dang, a UW graduate student in atmospheric sciences.

It generally took less than an hour to collect snow samples from different depths and soil samples from most sites from underneath the snow. More time was spent walking with a backpack full of tools and hauling a sled full of snow samples, two-thirds of a mile or more to the sampling site and back.

“Usually it involved a lot of climbing over fences,” Dang said. 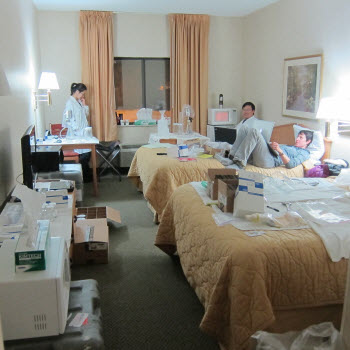 A motel-room lab in Forks, North Dakota.S. Warren / UWThe researchers transported snow samples in glass jars and plastic bags. They would keep these in the covered back of the truck so they remained frozen. Then every few days they would rent an extra room at a motel, set up a makeshift lab and run the snow water through filters.

“To keep from contaminating the samples we would wear white lab coats, and there was a lot of glassware involved,” Doherty said. “I’m sure more than a few hotel staff were suspicious of what was going on when they saw us carrying big duffels from our truck to the room in lab coats, and caught a glimpse of all the beakers and other equipment.”

The first time the truck got stuck was in Wyoming. The second was in a remote area of North Dakota, when Doherty pulled off onto a flat surface that turned out to be a snow-filled ditch.

“The more I cranked it, the closer we got to flipping over,” Doherty said. Luckily, there was a faint cell signal and AAA arrived within a couple of hours.

Much of the survey involved driving through rural areas and knocking on doors to ask for access to the homeowners’ fields. The paper’s acknowledgments section thanks “the many farmers in the U.S. and Canada who granted us access to their property to sample snow, usually with a bit of perplexity, but always with a great deal of friendliness and an offer for us to ‘take all the snow you want!'”