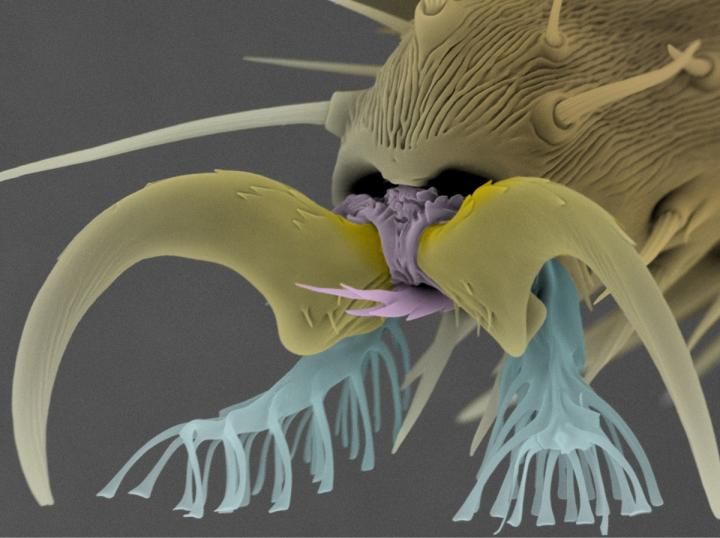 Electron micrograph of the fly foot. The adhesive spatula-shaped setae (light-blue structures) allow the fly to attach itself to objects.
Hokkaido University of Education

NIMS, HUE and HUSM have succeeded in developing a method of easily and cheaply producing an adhesive structure capable of repeated attachment and detachment. The design of this structure was inspired by the adhesive spatula-shaped hairs (setae) found on the footpads of flies, while the method of producing it was hinted at by seta formation in fly pupae. These environmentally sound technologies could potentially contribute to a more sustainable society.

Many types of manufactured products are reinforced with strong adhesives. However, the use of these adhesives hampers recycling processes (i.e., sorting and decomposition), countering efforts to promote a circular economy. For this reason, adhesive technologies capable of repeated attachment and detachment have been designed and developed. The biomimetic approach to the development of high-performance adhesive technologies seeks to imitate elaborate adhesive structures found in living organisms. However, this approach is frequently costly as it requires the use of MEMS (microelectromechanical systems) to create complex structures.

This research group focused on biological adhesive structures (e.g., insect footpads) known to form in an energy efficient manner at room temperature. The group developed adhesive structures and efficient methods of creating them by mimicking biological processes. In this research project, the group specifically focused on the adhesive, spatula-shaped setae that grow on fly footpads as a model for the development of adhesive structures that can be repeatedly attached to and detached from objects. The group observed the biological process by which the setae are formed in pupal fruit flies (Drosophila melanogaster) by staining fly legs for immunohistochemical analysis and labeling cytoskeletal actin with fluorescent dyes. As a result, the group discovered that adhesive spatulate footpad setae are formed in a simple two-step process: (1) seta forming cells elongate and cytoskeletal actin filaments in the cells accumulate at the distal tips of the elongated cells, forming the spatula-like frameworks, and (2) cuticle deposits form on the surfaces of the setae, solidifying them. The group then succeeded in developing a similar, simple two-step process to fabricate an adhesive spatulate structure at room temperature by (1) stretching nylon fibers to form a spatulate structure and (2) solidifying it. The structure's adhesive strength and ease of detachment were confirmed to vary, depending on the direction in which it is pulled away from the object to which it is attached?similar to the mechanisms insects use to attach or detach themselves to/from objects. A single spatulate fiber is sufficiently strong to suspend a silicon wafer from it weighing 52.8 g. Extrapolating from this, a bundle of 756 fibers (9 cm2 in cross-sectional area) can be expected to support a person weighing 60 kg.

This adhesive structure, capable of repeated attachment and detachment, may offer a variety of new robotic applications. For example, it may be integrated into the arms of industrial robots to enable them to better handle slippery objects, and it may be incorporated into the legs of outdoor robots to allow them to climb vertical walls like insects. The reusable adhesive structure and the low-cost, energy-efficient production method are environmentally friendly technologies that can potentially contribute to making society more sustainable.

This paper was published in Communications Biology.