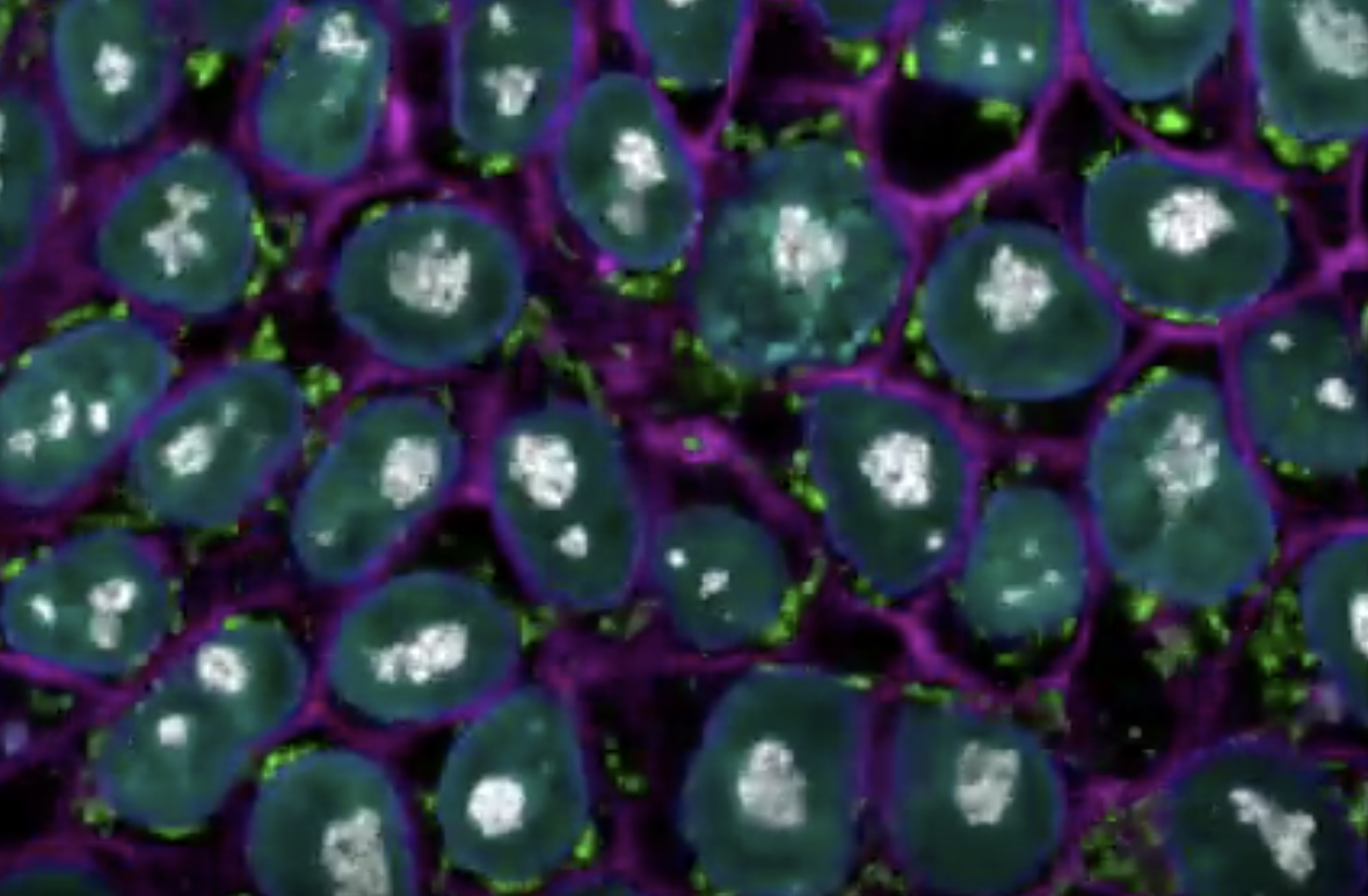 Scientists at the Allen Institute have used machine learning to train computers to see parts of the cell the human eye cannot easily distinguish. Using 3D images of fluorescently labeled cells, the research team taught computers to find structures inside living cells without fluorescent labels, using only black and white images generated by an inexpensive technique known as brightfield microscopy. A study describing the new technique is published today in the journal Nature Methods.

Fluorescence microscopy, which uses glowing molecular labels to pinpoint specific parts of cells, is very precise but only allows scientists to see a few structures in the cell at a time. Human cells have upwards of 20,000 different proteins that, if viewed together, could reveal important information about both healthy and diseased cells.

"This technology lets us view a larger set of those structures than was possible before," said Greg Johnson, Ph.D., Scientist at the Allen Institute for Cell Science, a division of the Allen Institute, and senior author on the study. "This means that we can explore the organization of the cell in ways that nobody has been able to do, especially in live cells."

The prediction tool could also help scientists understand what goes wrong in cells during disease, said Rick Horwitz, Ph.D., Executive Director of the Allen Institute for Cell Science. Cancer researchers could potentially apply the technique to archived tumor biopsy samples to better understand how cellular structures change as cancers progress or respond to treatment. The algorithm could also aid regeneration medicine by uncovering how cells change in real time as scientists attempt to grow organs or other new body structures in the lab.

"This technique has huge potential ramifications for these and related fields," Horwitz said. "You can watch processes live as they are taking place -- it's almost like magic. This method allows us, in the most non-invasive way that we have so far, to obtain information about human cells that we were previously unable to get."

The combination of the freely available prediction toolset and brightfield microscopy could lower research costs if used in place of fluorescence microscopy, which requires expensive equipment and trained operators. Fluorescent tags are also subject to fading, and the light itself can damage living cells, limiting the technique's utility to study live cells and their dynamics. The machine learning approach would allow scientists to track precise changes in cells over long periods of time, potentially shedding light on events such as early development or disease progression.

To the human eye, cells viewed in a brightfield microscope are sacs rendered in shades of gray. A trained scientist can find the edges of a cell and the nucleus, the cell's DNA-storage compartment, but not much else. The research team used an existing machine learning technique, known as a convolutional neural network, to train computers to recognize finer details in these images, such as the mitochondria, cells' powerhouses. They tested 12 different cellular structures and the model generated predicted images that matched the fluorescently labeled images for most of those structures, the researchers said.

It also turned out what the algorithm was able to capture surprised even the modeling scientists.

"Going in, we had this idea that if our own eyes aren't able to see a certain structure, then the machine wouldn't be able to learn it," said Molly Maleckar, Ph.D., Director of Modeling at the Allen Institute for Cell Science and an author on the study. "Machines can see things we can't. They can learn things we can't. And they can do it much faster."

The technique can also predict precise structural information from images taken with an electron microscope. The computational approach here is the same, said Forrest Collman, Ph.D., Assistant Investigator at the Allen Institute for Brain Science and an author on the study, but the applications are different. Collman is part of a team working to map connections between neurons in the mouse brain. They are using the method to line up images of the neurons taken with different types of microscopes, normally a challenging problem for a computer and a laborious task for a human.

"Our progress in tackling this problem was accelerated by having our colleagues from the Allen Institute for Cell Science working with us on the solution," Collman said.

Roger Brent, Ph.D., a Member of the Basic Sciences Division at Fred Hutchinson Cancer Research Center, is using the new approach as part of a research effort he is leading to improve the "seeing power" of microscopes for biologists studying yeast and mammalian cells. "Replacing fluorescence microscopes with less light intensive microscopes would enable researchers to accelerate their work, make better measurements of cell and tissue function, and save some money in the process," Brent said. "By making these networks available, the Allen Institute is helping to democratize biological and medical research."