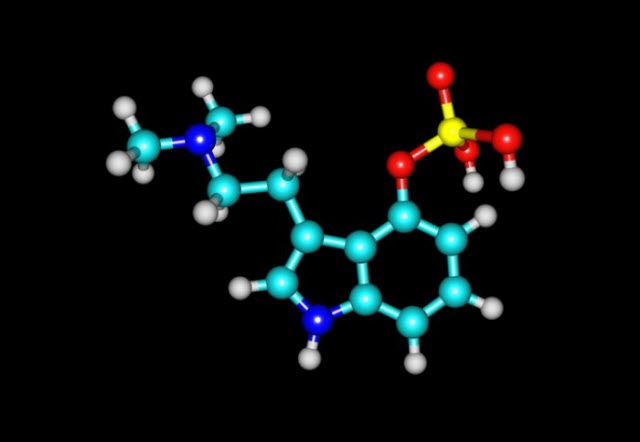 silocybin acts on the serotonin system suggesting it could be developed for use in the treatment of depression.Image courtesy of Imperial College London

The study team, from Imperial College London, say this could pave the way for future randomized-controlled trials to establish the efficacy of the compound in treating this form of depression.

It is estimated that 350 million people worldwide are affected by depression. The annual cost of depression in England is thought to be around £7.5 billion. Most people with depression respond positively to treatment using antidepressant medication and cognitive behavioral therapy. But around 20 per cent of those with depression do not respond to treatments and are classified as having treatment-resistant depression.

Previous studies have looked into the potential of using psychedelic drugs for conditions such as end of life anxiety, obsessive-compulsive disorder, and smoking dependence. Psilocybin acts on the serotonin system suggesting it could be developed for use in the treatment of depression.

The study, funded by the Medical Research Council, aimed to assess safety and whether a potential treatment dose of psilocybin could be tolerated.

Hallucinogenics such as psilocybin can cause unpleasant reactions, including anxiety and paranoia, so it is important to establish whether the drug can be administered safely to people with depression. To investigate the safety and feasibility of using psilocybin for treatment-resistant depression, researchers from Imperial  conducted a strictly monitored feasibility study. As this was not a randomized-controlled trial, the patients knew they were receiving the drug and there was no control group to provide comparison either with existing treatments or with no treatment at all.

Twelve people with moderate to severe treatment-resistant depression who had not responded to at least two courses of antidepressants were recruited (six men and six women, aged 30 to 64). Most of the participants actively volunteered to take part following presentations by the researchers and media coverage.

Eleven of the participants had previously undergone psychotherapy. The volunteers went through a thorough screening process before they were allowed to participate. Criteria used to rule out participants from taking part included people with a history of suicide attempts, those with diagnosis of a psychotic disorder, and other significant medical conditions. Participants were fully supported at all times before, during, and after they received psilocybin.

The psilocybin was administered to the participants at a research facility and participants were monitored by at least two members of clinical staff at all times during the psilocybin administration sessions. There was a follow-up with patients the next day, and then one, two, three, and five weeks after the second dosing session.

Blood pressure, heart rate, and the self-reported intensity of the effects of psilocybin were monitored before and continuously during each dosing session. No serious unexpected side effects were reported during the study. All participants reported temporary anxiety before and during initial drug administration.

All patients showed some decrease in symptoms of depression for at least three weeks. Seven of them continued to show a positive response three months after the treatment, with five remaining in remission after three months.

There are some limitations to this study, in addition to the small sample size. Previous studies have shown that using psychedelics can leave one open to suggestion, which could have been part of the positive outcomes seen here. It was also not possible to control for the psychological support received throughout this study.

Lead author, Dr Robin Carhart-Harris, from the Department of Medicine at Imperial College London, said: “Psychedelic drugs have potent psychological effects and are only given in our research when appropriate safeguards are in place, such as careful screening and professional therapeutic support. I wouldn't want members of the public thinking they can treat their own depressions by picking their own magic mushrooms. That kind of approach could be risky.”

Related Article: Shake it off? Not so Easy for People with Depression, New Brain Research Suggests

Senior author Professor David Nutt, the Edmond J Safra Chair in Neuropsychopharmacology at Imperial, said: “It is important that academic research groups try to develop possible new treatments for depression as the pharmaceutical industry is pulling out of this field. Our study has shown psilocybin is safe and fast acting so may, if administered carefully, have value for these patients.”

Dr Louise Jones, head of translational research at the MRC, said: “We currently don’t have effective treatments for some people’s depression so we need to know more about how drugs such as psilocybin could be used for patient benefit.  This study showed that, with appropriate safeguards, psilocybin can be safely administered to some patients with treatment-resistant depression.  It will now be important to undertake studies that evaluate its role as a potential treatment.”

The study was published in The Lancet Psychiatry.