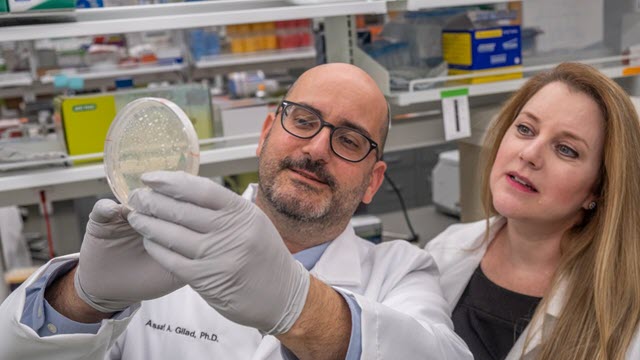 Assaf Gilad, a professor of biomedical engineering and radiology, and Galit Pelled, a medical bioengineering professor, have discovered an electromagnetic gene in glass catfish that could one day help those with Parkinson's and epilepsyCredit: Derrick Turner, Michigan State University

An aquarium fish that senses the Earth's magnetic field as it swims could help unlock how the human brain works and how diseases such as Parkinson's and other neurological disorders function.

Michigan State University scientists are the first to discover a navigational gene in glass catfish called the electromagnetic-perceptive gene, or EPG, that responds to certain magnetic waves. They've already developed a way to use it to control movement in mice.

The implications of the federally funded study, published in the journal Scientific Reports, have the potential to revolutionize treatments for humans and help those who suffer from tremors related to Parkinson's and seizures associated with epilepsy.

"We've found a noninvasive way to activate this gene once injected in the brain cells of mice and regulate movement in their limbs," said lead author Galit Pelled, a medical bioengineering professor in MSU's Institute for Quantitative Health Science and Engineering. "It could work similarly in humans."

A person suffering Parkinson's disease tremors, for example, could have the gene injected into a specific location or subset of cells in the brain. A magnet that emits electromagnetic waves in an eyeglass frame could then activate the gene to help control, if not stop, the tremors.

"Technology is getting better and better every year, so this magnet could be built into anything," Pelled said.

Currently, deep brain stimulation treatments for some Parkinson's patients' tremors involve highly invasive procedures such as drilling a hole in the skull and implanting electrodes. During this process, neurons and other cells can be damaged.

Pelled's co-author, Assaf Gilad, a professor of biomedical engineering and radiology, is taking their findings a bit further and is looking into engineering stem cells to express the gene.

"Stem cells are very good carriers of genes so if someone has Parkinson's, we can introduce these stem cells into the brain as a therapy," he said. "This type of treatment could not only help the brain, but could work in other parts of the body too, like the heart, and help those with heart issues."

The researchers said their next steps are to figure out what makes the electromagnetic-perceptive gene so sensitive to these magnetic waves.

"The mechanism of the gene is still unknown," Gilad said. "But once we understand how it really works, it could open the door to even more possibilities."