Accelerator experts at the Department of Energy’s SLAC National Accelerator Laboratory are developing ways to make the most powerful X-ray laser better than ever. They have created the world’s shortest X-ray pulses for capturing the motions of electrons, as well as ultra-high-speed trains of X-ray pulses for “filming” atomic motion, and have developed “smart” computer programs that maximize precious experimental time.

With its X-rays a billion times brighter than those available before, SLAC’s Linac Coherent Light Source (LCLS) has already revolutionized the field of ultrafast science and has opened new avenues for research in chemistry, biology and materials science. The new developments enhance the X-ray laser’s capabilities even further.

“Creating new capabilities for LCLS is a very important ongoing effort at SLAC,” said Axel Brachmann, head of the Linac and FEL Division of the lab’s Accelerator Directorate, at the 2017 SSRL/LCLS Users’ Meeting in September, where some of these developments were presented. “Our engineers and scientists are working hard to push the limits of what’s technologically possible and to make sure that SLAC stays a world leader in X-ray science.”

Snapshots in Billionths of a Billionth of a Second 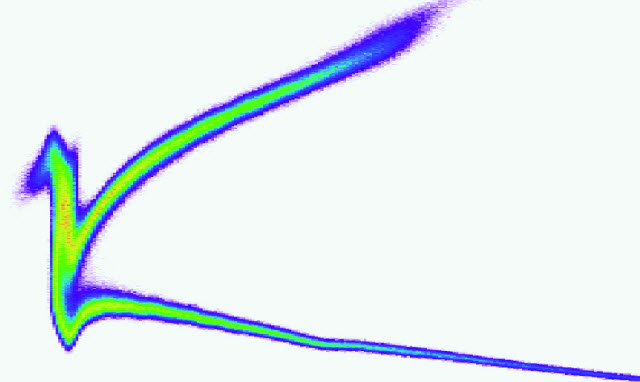 Two methods independently invented by scientists in SLAC’s Accelerator Directorate have produced the world’s first attosecond hard X-ray laser pulses at the lab’s LCLS facility. In one method, the shapes of electron bunches used to generate X-rays were manipulated with a radiofrequency field so that part of each bunch (dense area on the left) emits X-ray pulses with shorter-than-ever pulse lengthsImage credit: Yuantao Ding/SLAC National Accelerator Laboratory

LCLS’s discovery power is packed into extremely bright flashes of X-ray light, each lasting only a few femtoseconds—millionths of a billionth of a second. Like a strobe light that freezes motions too fast to see with the naked eye, these flashes capture images of atomic nuclei rapidly jiggling around in molecules and materials. But researchers would like to go further and film the even faster motions of an atom’s electrons.

“These ultrafast motions are very fundamental because they set the stage for all the slower processes,” says staff scientist Yuantao Ding. “However, they occur in less than a femtosecond, and we need a faster ‘camera’ to capture them.”

Two SLAC teams, led by Ding and fellow accelerator physicist Agostino Marinelli, have now made an important step in that direction. They demonstrated two independent methods for the generation of X-ray pulses of a few hundred attoseconds, or billionths of a billionth of a second, setting a record for X-ray lasers.

Both groups manipulated the tightly packed bunches of electrons that fly through a special set of magnets, called an undulator, to generate LCLS X-ray pulses. They tweaked the bunches so only part of each bunch emitted X-ray laser light—resulting in a much shorter pulse length.

“This is a major step forward, and actually uses relatively simple methods of generating attosecond pulses of X-rays with relatively high energy,” Marinelli says. “To take this even further, LCLS users want to use softer X-rays to allow them to study an atom’s outer electrons, which are the ones involved in chemical reactions. It turns out creating soft X-ray attosecond pulses is a much more complex process.”

That’s why Marinelli and others are working on a third method, called X-ray Laser-Enhanced Attosecond Pulses (XLEAP). In this approach the electron bunches interact with an infrared laser inside the undulator and are chopped up into thin slices. Simulations suggest that this method, which is currently being tested at LCLS, can produce soft X-ray pulses that are only 500 attoseconds long. 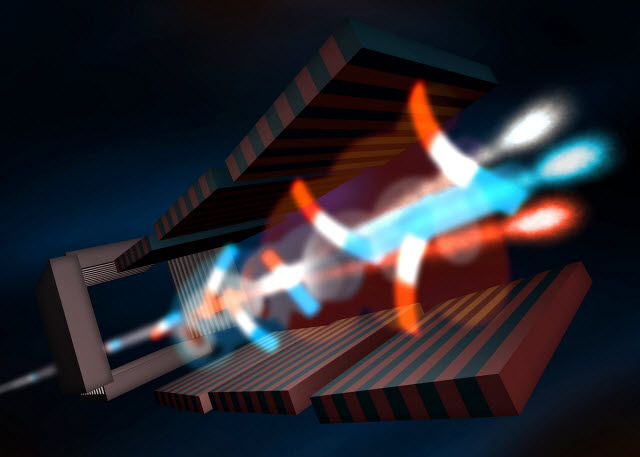 This illustration shows how three X-ray pulses with different energies, or colors, are generated with the fresh-slice technique from a single electron bunch traversing three separate sections of a special magnet, called an undulator.Illustration credit: Greg Stewart/SLAC National Accelerator Laboratory

To make movies of ultrafast processes at LCLS, researchers use the pump-probe technique, in which they hit a sample with a “pump” pulse from a conventional laser to trigger an atomic response and then examine the response with a “probe” pulse from the X-ray laser. By varying the amount of time between the two pulses, they can create a stop-action movie that shows how the sample’s atomic structure changes over time.

This works well as long as the process, such as the breaking of a chemical bond in a molecule, can be initiated with a conventional laser emitting visible, infrared or ultraviolet light. However, some reactions can only be set off by the higher energies of X-ray light pulses.

In principle, these experiments could be done at LCLS now, but the time between pulses would limit studies to processes slower than 8 milliseconds. Even with the future LCLS-II upgrade, which will “fire” up to a million pulses per second, this limit would still be a microsecond. Therefore, accelerator physicists are inventing methods that generate ultra-high-speed trains of X-ray flashes for the exploration of much faster processes.

“SLAC is testing and implementing a number of multi-pulse techniques for X-ray pump-probe experiments with soft and hard X-rays, such as the split-undulator, twin-bunch, fresh-slice, and two-bucket schemes,” says staff scientist Alberto Lutman. “Together they cover a broad range of very short pulse delays—from zero delay, meaning the pump and probe X-ray pulses hit the sample at the same time, to delays of just a few femtoseconds, and then all the way to more than 100 nanoseconds between pulses.”

Lutman is spearheading the development of the fresh-slice technique, in which the head, tail and center of a single electron bunch can produce separate X-ray pulses in separate sections of the undulator. “This is an extremely flexible method,” he says. “It lets us finely vary the delay between the pulses, and it also allows us to tweak the color and polarization of each X-ray pulse individually.”

Experiments with pulses of multiple colors, or X-ray energies, can, for example, enhance details in studies of the 3-D atomic structures and functions of molecules, such as medically important proteins. The fresh-slice method has also the potential to boost the power of extremely short X-ray pulses, and it has been used in seeding techniques that improve X-ray laser performance by making its light less noisy.

Most of the multi-pulse methods have been demonstrated for rapid sequences of two or three X-ray flashes, but the use of even more pulses is on the horizon. A team led by accelerator physicist Franz-Josef Decker is currently working on a technique that uses multiple laser pulses for the generation of trains of up to eight X-ray pulses. This would allow researchers to follow the complex evolution of how a material responds to high-pressure shocks, for example in the study of meteorite collisions. 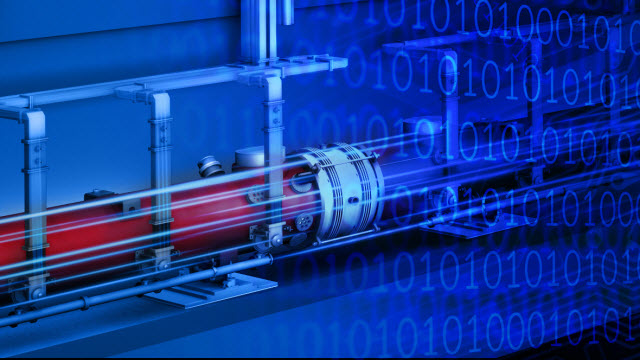 Underpinning all of the above research is the need to find new ways of running LCLS in the most efficient way so more experiments can be accommodated. The facility is one of only five hard X-ray lasers operating in the world, and access to it is extremely competitive. One path to increasing the amount of experimental time is to minimize the time spent tuning the machine to meet the needs of specific experiments.

“Each year we spend many hours optimizing the machine, which involves tedious adjustments of a large number of LCLS magnets,” says SLAC staff scientist Daniel Ratner. “We want to automate this procedure to free time for the activities that actually require human involvement.”

Until about a year ago, he says, all fine-tuning was done manually. Now it’s done with the aid of computers, which has already cut the optimization time in half. But the lab’s accelerator experts want to take automation to the next level by using a type of artificial intelligence known as “machine learning”—an approach where “smart” computer programs learn from past X-ray laser optimizations instead of repeating the same routine every time.

Last but not least, machine learning will help the lab efficiently operate two complex X-ray lasers side by side when the LCLS-II upgrade is complete.

Financial support for this research was provided by the DOE Office of Science. Parts of these projects are supported by DOE’s Laboratory Directed Research and Development (LDRD) Program. To enhance LCLS performance and create new capabilities, SLAC’s Accelerator Directorate partners with X-ray instrument scientists of the LCLS Directorate and other groups across the lab, as well as with many members of the LCLS user community. LCLS is a DOE Office of Science user facility.