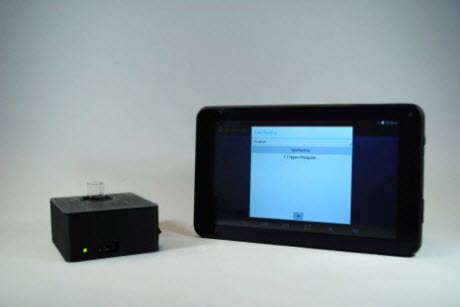 Monitoring nitrate is one of today's biggest water quality challenges. Professor Joshua Pearce and the Nitrate Elimination Company are looking to make this process better.Photo courtesy of Michigan Technological UniversityThe dull black plastic of the device on Joshua Pearce’s desk belies its usefulness. Pearce picks up the box, which has a switch on the side and a small opening on top. A handful of vials sit in a bag nearby, and each would fit snugly in the opening. The set-up seems generic, even bland, except that it could radically change how we deal with water quality issues.

Pearce, who has a joint appointment as an associate professor of materials science and engineering as well as electrical and computer engineering, runs an open sustainability technology lab at Michigan Technological University. Along with his students, Pearce made the handheld device with a 3-D printer and open source hardware in collaboration with the Nitrate Elimination Company, Inc. (NECi). The small machine replaces comparable devices that cost more and rely on old methods based on cadmium or zinc. The idea is to create better tools for testing nitrate content in water and soils. This week, PLOS ONE published the team’s research on the device.

“The beauty of this device is that it’s extremely adaptable, more sensitive, safer and smaller,” Pearce says. “We have both the ‘business story’ and the ‘feed the people story’ here."

High nitrate levels in water cause the dead zones in the world’s largest deltas. Using too much nitrogen fertilizer wastes resources and leads to nitrate in runoff and water wells and an excess of nitrate in drinking water is a health hazard to infants and harmful to many animals. Current portable nitrate testers range in price and accuracy, from ballpark data at low price points to several hundred dollars for a handheld photometer. This new design is palm-sized, interfaces with a free Android app, costs less than $65 to manufacture and uses green chemistry for a safer and more accurate testing procedure.

“This is a Popeye-approved reagent methodology,” Pearce jokes, adding that the enzyme used in the test kit is found in spinach and other leafy greens. “We’re replacing a toxic heavy metal with something that you eat every day in your salad.”

Kale and collards aside, Pearce is serious about how the enzyme, called nitrate reductase, makes for a better device since NECi considers the chemical processing from sourcing to disposal. The PLOS ONE paper is a validation study, and, Pearce says, the device not only works, it “performs as well as commercial proprietary systems for less than 15 percent of the cost for materials and is 100 percent open source.”

Having freely available hardware and software is only part of what makes this new nitrate test kit an improvement in the industry. 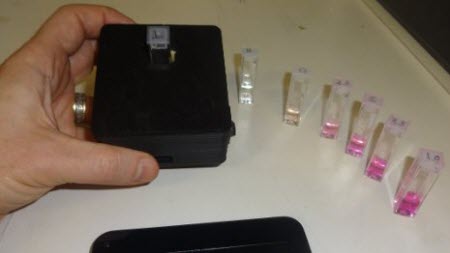 Photo courtesy of Michigan Technological UniversityEllen Campbell, the CEO of NECi, hopes to revolutionize standard nitrate testing—as well as phosphate testing and other procedures—so that everyone has access to more affordable and more sensitive equipment. NECi’s nitrate test reagents are close to being standardized by the Environmental Protection Agency for use under the Clean Water Act. The US Geological Survey embraced the reagents in their labs.

“But it’s been a long and painful process to reach this point, because the way scientists think of methods development, and the way the regulatory community thinks of it, is so different,” Campbell says. Another challenge, she adds, is establishing a methodology that non-scientists can use.

“We thought, okay, regulators are starting to crack down on runoff from farms, people want to know that their well water is safe to drink, and citizen monitors need better tools,” Campbell explains. “We set out to simplify our enzyme-based methods so that anybody can use them.”

Whether the end user is a farmer, citizen-science group, water treatment plant or government agency, Pearce and Campbell saw a need to streamline access to the equipment and data. The device is paired with a free tablet app provided by NECi and was made using 3-D printing and open source electronics and software. That not only makes the system less expensive and more accessible, but also customizable.

Pearce notes in the paper that the device can be adapted for different chemical measurements as it was derived from their earlier open-source 3-D printed laboratory work on colorimeters and water testing platforms. Minor modifications—and different reagents or complementary tools used to test samples—can create test kits for phosphate, microbial activity, turbidity, biofuel composition and UV applications.

One of the biggest benefits, Pearce says, is making quality equipment available to schools. Campbell and NECi have been working with a school in Virginia to test out the devices in classrooms.

“We need better ways to inspire up-and-coming scientists; what better way than to have them use real equipment and gather real data in their communities?” Pearce says. “We are working to make this nitrate test kit available to everybody.”