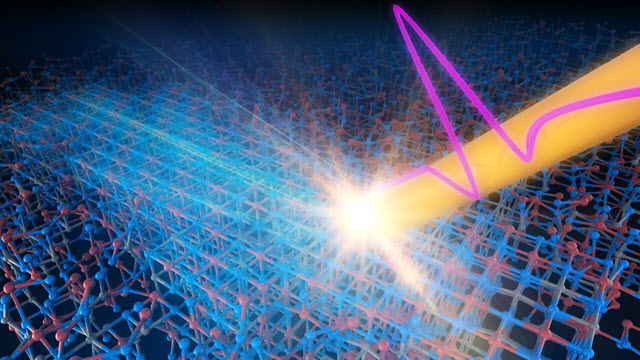 A team of scientists has created the world's most powerful electromagnetic pulses in the terahertz range to control in fine detail how a data-storage material switches physical form. This discovery could help find a way to scale down memory devices, eventually revolutionizing how computers handle information.

Compact discs might be falling out of fashion, but they may have inspired the next generation of computer nanotechnology. A glass layer in CDs consists of a phase-change material that can be encoded with information when light pulses cause crystals in small regions of the layer to either grow or melt.

Phase-change materials triggered by electrical impulses—rather than light—would offer new memory technologies with more stable and faster operation than that possible in many current types of memory devices. In addition, downscaling memory sites in phase-change materials could increase memory density. But this remains challenging because of the difficulty of controlling the crystal growth—crystallization—and melting—amorphization—processes.

Addressing this issue in an article in Physical Review Letters, a team of scientists led by Kyoto University observed nanometer-scale growth of individual crystals in a phase-change material composed of germanium, antimony, and tellurium—or GST—after applying high-powered terahertz pulses as a trigger.

"One reason crystallization and amorphization of GST under an electric field are difficult to control is the heat diffusion effects in the micrometer scale associated with electrical inputs, which also contribute to the crystallization," explains group leader Hideki Hirori. "Fortunately, terahertz technologies have matured to the point where we can use short pulses to generate strong electric fields while suppressing heating effects."

Hirori and his co-workers developed a terahertz pulse generator that delivered ultra-short and highly intense terahertz pulses across a pair of gold antennas. These pulses created an electric field in the GST sample comparable to that of an electrically switched device. Importantly, this approach greatly reduced the heat diffusion because of the extremely short duration of terahertz pulses—around one picosecond, or 10-12 seconds—enabling fine control over the rate and direction of GST crystallization. A region of crystallization grew in a straight line between the gold antennas in the direction of the field, at a few nanometers per pulse.

When the team tracked stepwise changes in crystallization while increasing the number of terahertz pulses, they were surprised to find that after a certain point, crystal conductivity rapidly sped up instead of rising in line with the increase in terahertz strength. The researchers hypothesize that electrons jumping between states in the crystal added an unexpected source of heat to the system, boosting crystallization.

Hirori explains: "Our experiment reveals how nanoscale and direction-controlled growth of crystals in GST can be achieved. We also identified a phenomenon which should assist in the design of new devices and ultimately realize the fast and stable digital information handling potential that this material promises."