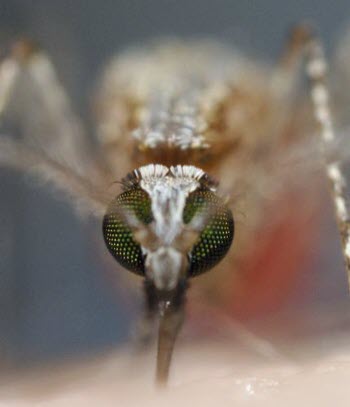 Malaria parasites have evolved to be most infectious at the time of day when mosquitoes feed, to maximize the chance of being spread, research shows.

The finding explains why people with the disease experience regular bouts of fever. These occur as the parasites that cause malaria replicate in the bloodstream of infected people or animals, in preparation for being picked up by a biting mosquito.

The study is the first to provide strong evidence for this idea, which was first suggested 50 years ago.

As increasing use of bednets by people in affected regions drives mosquitoes to feed during the day, malaria parasites may also have to adapt their behavior so that they are better able to spread infection in the daytime, the results suggest.

Scientists from the University of Edinburgh studied daily rhythms of malaria parasites and the mosquitoes that spread them.

In a lab experiment with mice, scientists used light and darkness to separately alter the day and night times of mosquitoes and malaria parasites. By feeding some insects during the day and others at night, they learned how both the parasites' ability to cause infection—and the mosquitoes' vulnerability to disease— varied depending on the time of day.

Their results showed that cycles of fever in malaria infection likely evolved to produce forms of the parasite that are infectious to mosquitoes in sync with the insects' feeding cycles. They also showed that mosquitoes are more susceptible to infection in the daytime.

The study, supported by the Natural Environment Research Council, the Biotechnology and Biological Sciences Research Council, Wellcome and the Human Frontier Science Program, was published in Proceedings of the Royal Society B.

Dr Petra Schneider, of the University of Edinburgh's School of Biological Sciences, said: "It has long been suspected that malaria parasites time their replication to maximize their chance of transmission by mosquitoes. Our findings lend valuable insight into how this disease spreads, and could inform measures to control it."