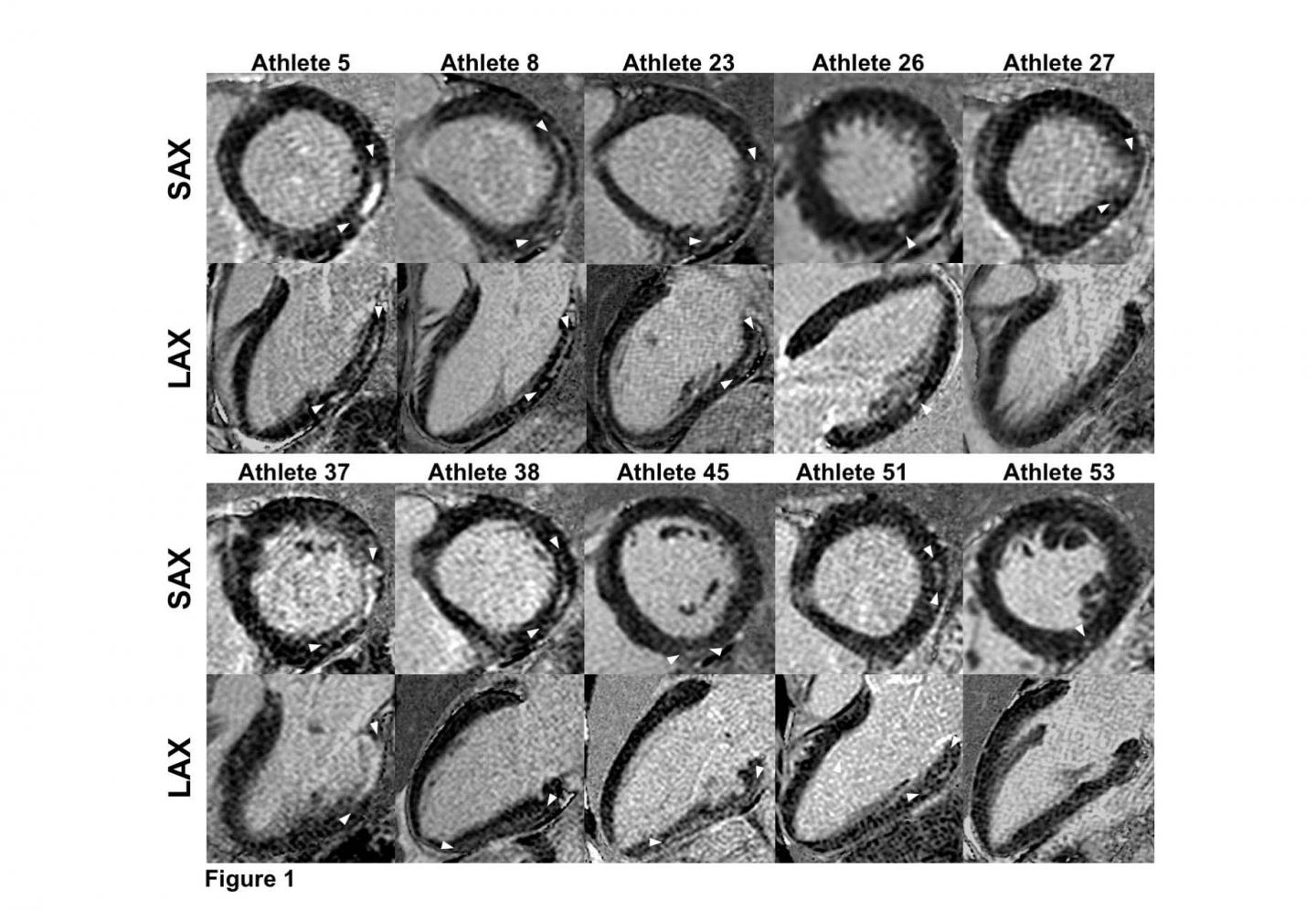 Short-axis and long-axis LGE images depicting a non-ischemic fibrosis pattern in all 10 LGE+ triathletes. LGE size, indicated by arrows, varied from small, point-shaped (triathlete 53) to larger and more distinct (triathletes 5, 8 and 37) areas of fibrosis.Image Credit: Radiological Society of North America
CHICAGO - Competitive male triathletes face a higher risk of a potentially harmful heart condition called myocardial fibrosis, according to research being presented at the annual meeting of the Radiological Society of North America (RSNA). The increased risk, which was not evident in female triathletes, was directly associated with the athletes' amount of exercise.

Myocardial fibrosis is scarring of the heart. It usually affects the pumping chambers, also known as the ventricles. The condition might progress to heart failure. While regular exercise has beneficial effects on the cardiovascular system, previous studies have shown the presence of myocardial fibrosis in elite athletes.

"The clinical relevance of these scars is currently unclear," said study lead author Jitka Starekova, M.D., fellow in the Department for Diagnostic and Interventional Radiology and Nuclear Medicine at University Medical Center Hamburg-Eppendorf in Hamburg, Germany. "However, they might be a foundation for future heart failure and arrhythmia."

Dr. Starekova and colleagues recently studied a group of triathletes, including 55 men, average age 44, and 30 women, average age 43. The study group underwent cardiac MRI exams with the contrast agent gadolinium, which is taken up by both normal and injured heart muscle tissue. Gadolinium washes out quickly in normal heart tissue, but much more slowly in scarred tissue, revealing a difference in contrast between normal and injured heart muscle after approximately 10 minutes. This phenomenon, known as late gadolinium enhancement, is a useful tool for detection of myocardial fibrosis.

Evidence of myocardial fibrosis was apparent in the left ventricle -- the heart's main pumping chamber -- in 10 of 55 of the men, or 18 percent, but in none of the women.

These same athletes had completed significantly longer total, swimming and cycling distances and had higher peak exercise systolic blood pressure than their counterparts without myocardial fibrosis.

There are several possible factors for the link between the amount of exercise and the risk of myocardial fibrosis, according to Dr. Starekova. Higher exercise-induced systolic blood pressure may result in greater myocardial mass, she said, and more exercise might expose the athlete to a higher risk of myocarditis, or inflammation of the heart muscle. These factors, in combination with repeatedly increased stress of the left ventricular wall due to exercise, could injure the heart muscle.

Other factors may be responsible for the striking difference in myocardial fibrosis risk between male and female triathletes, Dr. Starekova said, including the presence of testosterone.

"Although we cannot prove the exact mechanism for the development of myocardial fibrosis in triathletes, increased systolic blood pressure during exercise, the amount and extent of race distances and unnoticed myocarditis could be cofactors in the genesis of the condition," she said. "In other words, repetition of any extreme athletic activity may not be beneficial for everyone."

The researchers plan long-term follow-up studies to see if any cardiac events occur in the triathletes who had evidence of myocardial fibrosis.