New chemicals are often not recognized in analyses of fish in the Baltic Sea, shows a study from the Department of Environmental Science and Analytical Chemistry at Stockholm University. The reason is that one chooses to search for chemicals that are already known, and much of those that are already regulated by law. Many toxic chemicals that are not yet regulated are often overlooked in the environmental monitoring. The study is now published in the journal Environmental Science.

Dissection of fish for chemical analysis.Photo courtesy of Stockholm UniversityThe researchers examined data from research and monitoring reports from the years 2000-2012, to see what chemicals have been analyzed in Baltic Sea fish.

“We found that often it is the already known chemicals that are being analyzed again and again. The chemicals analyzed in fish from the Baltic Sea are for the most part already regulated in some way, for example through EU's chemicals legislation REACH, the Stockholm Convention on persistent organic pollutants, or the EU's Water Framework Directive”, says Anna Sobek, Department of Environmental Science and Analytical Chemistry, Stockholm University. 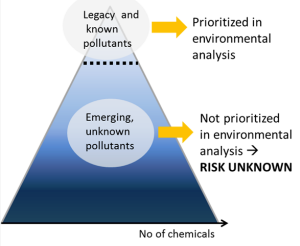 The proportion of unknown pollutants that are not prioritized for analysis is large.Illustration credit: Anna Sobek, ACESAnalyses of environmental chemicals are costly and time-consuming; therefore you need to prioritize which chemicals to analyze.

“Our study shows that there is a tendency to give priority to these chemicals just because they have already been analyzed and have a known risk to the environment and humans. Although there are good arguments for monitoring these chemicals, at the same time we lack important knowledge about new toxic chemicals present in the environment”, says Sobek.

Authors of the study "The dilemma in Prioritizing Chemicals for Environmental Analysis: Known versus unknown hazards" are Anna Sobek, Sofia Bejgarn, Rudén and Magnus Breitholtz, all researchers at the Department of Environmental Science and Analytical Chemistry, ACES, Stockholm University.