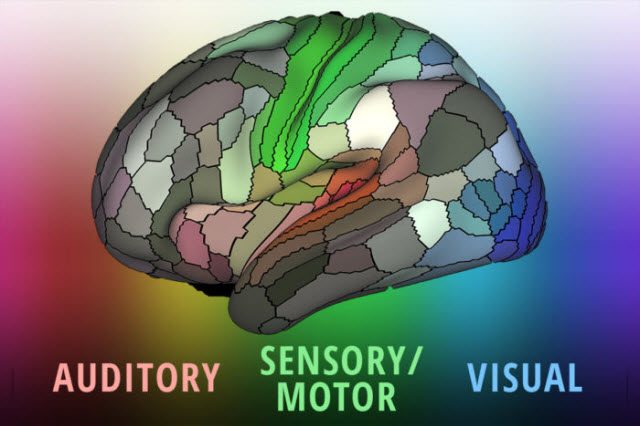 A detailed new map by researchers at Washington University School of Medicine in St. Louis lays out the landscape of the cerebral cortex—the outermost layer of the brain and the dominant structure involved in sensory perception and attention, as well as distinctly human functions such as language, tool use, and abstract thinking.Image credit: MATTHEW GLASSER/ERIC YOUNG

The age of exploration has long passed, but there is at least one area still largely uncharted: the human brain. Now, a detailed new map by researchers at Washington University School of Medicine in St. Louis lays out the landscape of the cerebral cortex—the outermost layer of the brain and the dominant structure involved in sensory perception and attention, as well as distinctly human functions such as language, tool use, and abstract thinking.

With the features of a typical brain demarcated in painstaking detail, the new map will be a boon to researchers studying brain disorders such as autism, schizophrenia, dementia, and epilepsy. Scientists will be able to use it to understand differences in the brains of patients with these diseases compared with adults who are healthy. It also will accelerate progress in deciphering the workings of the healthy brain and elucidating what makes us unique as a species.

The work was published July 20 in Nature.

The new map divides both the left and right cerebral hemispheres into 180 areas based on physical differences (such as the thickness of the cortex), functional distinctions (such as which areas respond to language stimuli), and differences in the connections of the areas. Brain cartography is not as simple as noting a “mountain” over here and a “river” over there, since much of the brain looks superficially the same. The map is more akin to a map showing state borders than topographic features; the most important divisions are invisible from the sky but extremely important all the same.

“The brain is not like a computer that can support any operating system and run any software,” said Van Essen, the Alumni Endowed Professor of Neuroscience. “Instead, the software—how the brain works—is intimately correlated with the brain’s structure—its hardware, so to speak. If you want to find out what the brain can do, you have to understand how it is organized and wired.”

The researchers mapped the cortex, a layer of neural tissue that encases the rest of the brain like a crumpled sheet of paper. The cortex is important for sensation, attention, memory, perception, thought, language, and consciousness. 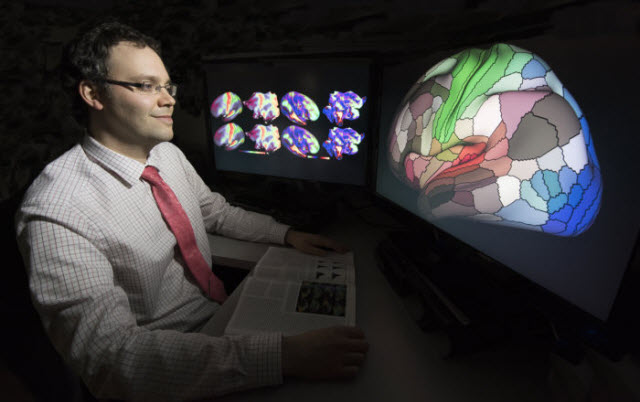 Matthew Glasser, PhD, is part of a team that mapped the human cerebral cortex in painstaking detail. The map will help researchers study brain disorders such as autism, schizophrenia, dementia and epilepsy.Photo credit: ROBERT BOSTON

A German neuroanatomist, Korbinian Brodmann, first mapped the human cortex in the first decade of the 20th century. He identified 50 regions, including areas later shown to be involved in visual, language, and sensory processing.

When the new study’s lead author, Matthew Glasser, PhD, began studying the connections between language areas of the brain almost a century later, he quickly became frustrated with Brodmann’s map and how it was typically being used in neuroimaging.

“My early work on language connectivity involved taking that 100-year-old map and trying to guess where Brodmann’s areas were in relation to the pathways underneath them,” said Glasser. “It quickly became obvious to me that we needed a better way to map the areas in the living brains that we were studying.”

To make this map, Glasser, Van Essen and colleagues pooled data from 210 healthy young adults of both sexes. The researchers combined measures of the thickness of the cortex and the amount of insulation around neuronal cables, with MRI scans of the resting brain and of the brain performing simple tasks, such as listening to a story.

“We ended up with 180 areas in each hemisphere, but we don’t expect that to be the final number,” Glasser said. “In some cases, we identified a patch of cortex that probably could be subdivided, but we couldn’t confidently draw borders with our current data and techniques. In the future, researchers with better methods will subdivide that area. We focused on borders we are confident will stand the test of time.”

Some of those areas are clearly involved in particular tasks, such as 55b, which lights up with activity when a person hears a story. Others contain a map of a person’s field of vision or are involved in controlling movement. Most areas probably will never be identified with a single function, because they don’t do just one thing but instead coordinate information from many different signals.

In the century between Brodmann’s map and Glasser and Van Essen’s, many other maps of the cortex have been drawn, showing anywhere from 50 to 200 different areas. The researchers improved on previous maps by precisely aligning the brains to a common coordinate system before analysis, using an algorithm developed by colleagues at Oxford University, and incorporating the highest-quality MRI data available. The researchers also verified that their method could be applied to individuals by producing maps of the brains of a different set of 210 healthy young adults.

The results are a precise map with unusually crisp borders and an algorithm capable of locating the areas in individual brains, even though each individual is unique in terms of the pattern of cortical folds and in the size and shape of areas on the cortical map.

“In the past, it was not always clear whether the results from two separate neuroimaging studies referred to the same area or not,” Glasser said. By using the new map and alignment algorithm, results of separate studies could be more accurately compared. 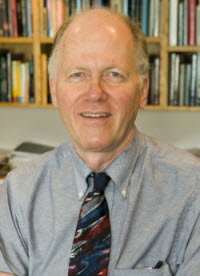 Van EssenPhoto courtesy of Washington University School of Medicine in St. Louis Better individual maps of the brain could be very useful. Neurosurgeons at Washington University already use less detailed individual brain maps when preparing for surgery to avoid damaging the most important areas, such as those involved in language or motor function.

Individual brain maps also could guide treatment for neurological or psychiatric illnesses. Different types of dementia, for example, are characterized by degeneration in different areas of the brain. Clinicians could use the individual maps to personalize treatment, based on the areas affected, or to monitor response to treatment.

“We were able to persuade Nature to put online almost 200 extra pages of detailed information on each of the 180 regions as well as all of the algorithms we used to align the brains and create the map,” Van Essen said. “We think it will serve the scientific community best if they can dive down and get these maps onto their computer screens and explore as they see fit.”