KANSAS CITY, MO—Researchers at the Stowers Institute for Medical Research have solved the three-dimensional structure of a complex that is essential for the correct sorting of chromosomes into eggs and sperm during reproductive cell division or meiosis.

When this structure, called the synaptonemal complex, doesn't assemble properly in the cell, it can lead to chromosomal abnormalities, miscarriages, and birth defects.

Since the synaptonemal complex was first discovered in 1956, researchers have been trying to identify its many moving parts and how they fit together. Their efforts have been limited by the laws of physics: the structure is too small to be visualized by even the most high-power microscopes. 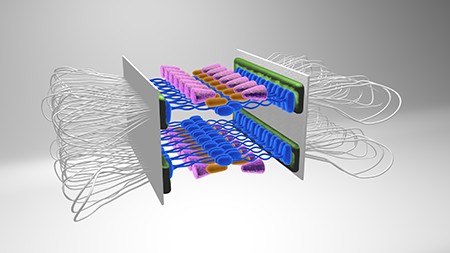 The Drosophila synaptonemal complex forms between homologous chromosomes as two distinct layers that mirror each other. Four synaptonemal complex proteins are known in flies, C(2)M (green), C(3)G (blue), Corolla (pink), and CONA (yellow). Silver represents the DNA as well as the many cohesin proteins (not examined in this study) that hold sister chromatids together during meiosis.Illustration credit: Ryan KramerNow, Stowers researchers, including Cori Cahoon, Zulin Yu, PhD, and Yongfu Wang, PhD, have married two advanced microscopy techniques—one that enlarges samples to several times their original size and another that uses computers to capture what the human eye cannot see—to render the likeness of this enigmatic structure. Their findings, reported in the July 31, 2017 online early edition of the Proceedings of the National Academy of Sciences, were not at all what they expected.

"The structure was so much more complicated and beautiful than we ever imagined," says R. Scott Hawley, PhD., an investigator at the Stowers Institute and senior author of the study. "We thought it just looked like a railroad track, but we discovered that it is actually more like two railroad tracks, one stacked on top of the other. That changes the way we think about this structure and what it does."

In meiosis, the cell copies all its chromosomes, pairs them up, and then divides them into eggs or sperm. This carefully choreographed process is helped along by the synaptonemal complex, an assembly of proteins that forms between the paired homologous chromosomes and keeps them properly aligned and in position. Errors during meiosis are a leading cause of miscarriages in humans.

For decades, researchers working in yeast, flies, worms, and even some mammals have tried to get a close look at the evolutionarily conserved synaptonemal complex structure. Then last year, Yu and Wang, researchers in the Stowers Microscopy and Histology facilities, respectively, learned of a new technique called expansion microscopy that allows structures to be visualized with nanoscale precision. They contacted Cahoon, a predoctoral researcher in Hawley's lab who was studying the synaptonemal complex, and suggested they give it a try.

"She was willing to take a chance and do the experiments, even though they were risky. It paid off big time," says Hawley. "What they accomplished was a technical tour de force."

First, the team gathered samples of the synaptonemal complex from dissected fruit fly ovaries. They embedded these samples in a special type of gel, added liquid, and watched the samples expand fourfold. Then, the researchers studied the super-sized samples using the super-resolution technique called structured illumination microscopy.

What they found was startling: the structure was divided into two identical layers, which had been indistinguishable at lower resolution. Basically, the synaptonemal complex connects two homologous chromosomes, each with two sister chromatids stacked on one another. The researchers showed that this complex uses a two-tiered approach to connect the two upper chromatids and the two lower chromatids separately. They created a computer model of the structure showing coils of DNA connected by two sets of railroad tracks, which are made up of the four known proteins that are part of the synaptonemal complex. Although in this study the researchers looked at only four proteins, many more unknown proteins likely reside in the structure as well, so there are still more details to fill in.

"This was a really incredible insight, a technical leap using this new methodology of expansion microscopy and merging it with structured illumination to create a way to look at a structure that hasn't been resolved before," says Hawley. "There is a lot more we can learn. The deeper we dive into structure, the more complexity we see, the more amazing the structure becomes. Structure provides so much insight into function."

The work was funded by the Stowers Institute for Medical Research and R. Scott Hawley is an American Cancer Society Professor.