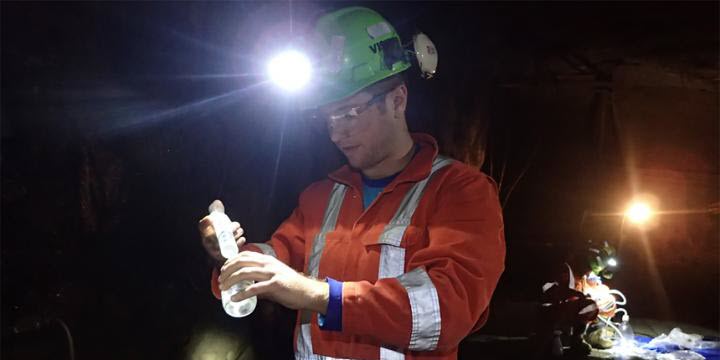 Jesse Tarnas, a Brown University graduate and postdoctoral research at NASA's Jet Propulsion Laboratory, work in Canada's Kidd Creek Mine. Water in the depths of the mine that hasn't seen the light of day in a billion years was shown to harbor rock-eating life. New research shows that the subsurface of Mars has the right ingredients to harbor similar forms of life.
Jesse Tarnas

PROVIDENCE, RI — Brown University — As NASA's Perseverance rover begins its search for ancient life on the surface of Mars, a new study suggests that the Martian subsurface might be a good place to look for possible present-day life on the Red Planet.

The study, published in the journal Astrobiology, looked at the chemical composition of Martian meteorites—rocks blasted off of the surface of Mars that eventually landed on Earth. The analysis determined that those rocks, if in consistent contact with water, would produce the chemical energy needed to support microbial communities similar to those that survive in the unlit depths of the Earth. Because these meteorites may be representative of vast swaths of the Martian crust, the findings suggest that much of the Mars subsurface could be habitable.

"The big implication here for subsurface exploration science is that wherever you have groundwater on Mars, there's a good chance that you have enough chemical energy to support subsurface microbial life," said Jesse Tarnas, a postdoctoral researcher at NASA's Jet Propulsion Laboratory who led the study while completing his PhD at Brown University. "We don't know whether life ever got started beneath the surface of Mars, but if it did, we think there would be ample energy there to sustain it right up to today."

In recent decades, scientists have discovered that Earth's depths are home to a vast biome that exists largely separated from the world above. Lacking sunlight, these creatures survive using the byproducts of chemical reactions produced when rocks come into contact with water.

One of those reactions is radiolysis, which occurs when radioactive elements within rocks react with water trapped in pore and fracture space. The reaction breaks water molecules into their constituent elements, hydrogen and oxygen. The liberated hydrogen is dissolved in the remaining groundwater, while minerals like pyrite (fool's gold) soak up free oxygen to form sulfate minerals. Microbes can ingest the dissolved hydrogen as fuel and use the oxygen preserved in the sulfates to "burn" that fuel.

In places like Canada's Kidd Creek Mine, these "sulfate-reducing" microbes have been found living more than a mile underground, in water that hasn't seen the light of day in more than a billion years. Tarnas has been working with a team co-led by Brown University professor Jack Mustard and professor Barbara Sherwood Lollar of the University of Toronto to better understand these underground systems, with an eye toward looking for similar habitats on Mars and elsewhere in the solar system. The project, called Earth 4-D: Subsurface Science and Exploration, is supported by the Canadian Institute for Advances Research.

For this new study, the researchers wanted to see if the ingredients for radiolysis-driven habitats could exist on Mars. They drew on data from NASA's Curiosity rover and other orbiting spacecraft, as well as compositional data from a suite of Martian meteorites, which are representative of different parts of the planet's crust.

The researchers were looking for the ingredients for radiolysis: radioactive elements like thorium, uranium and potassium; sulfide minerals that could be converted to sulfate; and rock units with adequate pore space to trap water. The study found that in several different types of Martian meteorites, all the ingredients are present in adequate abundances to support Earth-like habitats. This was particularly true for regolith breccias—meteorites sourced from crustal rocks more than 3.6 billion years old—which were found to have the highest potential for life support. Unlike Earth, Mars lacks a plate tectonics system that constantly recycle crustal rocks. So these ancient terrains remain largely undisturbed.

The researchers say the findings help make the case for an exploration program that looks for signs of present-day life in the Martian subsurface. Prior research has found evidence of an active groundwater system on Mars in the past, the researchers say, and there's reason to believe that groundwater exists today. One recent study, for example, raised the possibility of an underground lake lurking under the planet's southern ice cap. This new research suggests that wherever there's groundwater, there's energy for life.

Tarnas and Mustard say that while there are certainly technical challenges involved in subsurface exploration, they aren't as insurmountable as people may think. A drilling operation wouldn't require "a Texas-sized oil rig," Mustard said, and recent advances in small drill probes could soon put the Martian depths within reach.

"The subsurface is one of the frontiers in Mars exploration," Mustard said. "We've investigated the atmosphere, mapped the surface with different wavelengths of light and landed on the surface in half-a-dozen places, and that work continues to tell us so much about the planet's past. But if we want to think about the possibility of present-day life, the subsurface is absolutely going to be where the action is."

- This press release was originally published on the Brown University News website. It has been edited for style