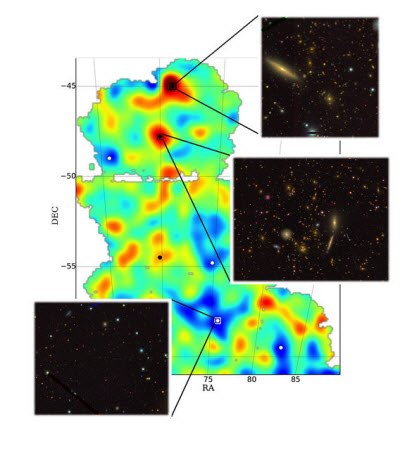 By cross-correlating a galaxy distribution map and a mass map derived from weak gravitational lensing, a team of researchers that included Argonne National Laboratory’s Vinu Vikraman showed how the galaxy distribution traces that of the dark matter.Image courtesy of Argonne National LaboratoryAn international team of researchers has developed a new map of the distribution of dark matter in the universe using data from the Dark Energy Survey (DES).

The DES, underway at the Blanco telescope in Chile, is a cosmological galaxy survey that will map approximately an eighth of the visible sky. The primary aim of the DES is to better characterize dark energy – the source of the observed accelerated expansion of the universe. But one of the ways of doing this is through studying the distribution and evolution of another scientific mystery: dark matter. Scientists estimate that ordinary atomic matter makes up only one-fifth of the total mass in the universe. The remaining mass is dark – “dark” because it does not absorb or emit light.

Scientists need a precise measurement of all the matter in the universe and where it is located to perform cosmological experiments accurately, said Vinu Vikraman, a postdoctoral researcher at the U.S. Department of Energy’s Argonne National Laboratory and co-author of the study.

“We don’t know what dark matter really is or how to directly locate it in the universe,” Vikraman said. “This map will act as a valuable tool for cosmology to answer some of these questions, including those related to dark energy.”

To indirectly detect dark matter, the scientists constructed a “mass map” using weak gravitational lensing shear measurements made by the DES. Gravitational lensing refers to the bending of light by the mass surrounding galaxies. This bending creates a distortion, or shear, of the galaxy’s shape, which scientists can then measure to determine the density and matter distribution of the lens.

The researchers then compared the mass map with a new optical galaxy distribution map, also made from DES data. The information allowed the scientists to look for patterns in the distribution of galaxies and dark matter.

The relationship between the galaxy distribution and the mass map is close to that predicted by theoretical models based on cosmological simulations that include an accelerated expansion of the universe.

DES data are projected to cover more than 36 times the area of this initial map. Scientists are hopeful that this set of data will lead to new clues about the nature of dark energy.