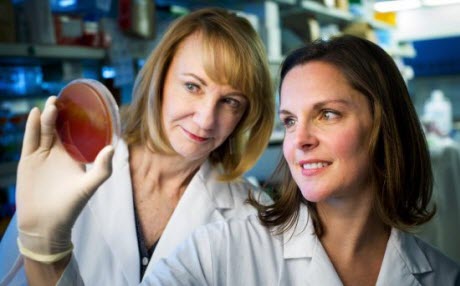 The findings in an experimental model provide a possible mechanism that might underlie the association between maternal bacterial infections during pregnancy and an increased risk of autism and other cognitive problems in children. The research also raises questions about which class of antibiotics should be used to treat such infections.

“The finding was unexpected because in children and adults pneumococcal infections can lead to meningitis and the death of neurons,” said the study’s corresponding author Elaine Tuomanen, MD, chair of the St. Jude Department of Infectious Diseases. “This study in a mouse model of the bacterial infection found that prenatally the opposite is true. The evidence suggests maternal infections cause a signaling event that leads to the proliferation and reorganization of neurons in the developing brain that is defective in some way, maybe due to overcrowding.”

Researchers showed for the first time that pieces of the bacterial cell wall crossed the placenta and traveled to the fetal brain, triggering proliferation of immature neurons. Evidence suggested the proliferation was sparked by a previously unrecognized pathway that involves the innate immune system and a protein that regulates gene expression.

The proliferation resulted in a 50 percent increase in neurons in a region of the developing brain that becomes the cortex, which is responsible for thought, action and other higher functions.

Investigators also reported that mice exposed to bacterial cell wall early in fetal development later performed below average on measures of memory and cognitive functioning. Researchers found evidence that treatment of maternal infection by the antibiotic ampicillin, which destroys bacteria and sends pieces of the cell wall into the bloodstream, led to a similar neuronal increase.

Tuomanen said the results raise questions about which class of antibiotics should be used to treat bacterial infections during pregnancy. “This study suggests widely used antibiotics like ampicillin that cause bacteria to burst and release cell wall may lead to changes in the developing brain,” she said. “Such changes did not occur in mice treated with antibiotics like clindamycin that kill without releasing cell wall.

“Additional studies are needed to understand the long-term impact of different classes of antibiotics on pregnancy outcomes,” Tuomanen said.

Working in cells growing in the laboratory and in mice, researchers showed how pieces of the pneumococcal cell wall bind to the protein platelet activating factor receptor (PAFr) for transport across the placenta and entry into the fetal brain.

There, rather than triggering inflammation and cell death, within hours the bacterial cell wall had switched on expression of the protein FoxG1. FoxG1 is a transcription factor that drives neural proliferation. The proliferation occurred early in pregnancy deep in a region of the brain called the ventricular zone. Within days, researchers documented a 50 percent increase in neurons in the cortical plate, which becomes the cortex.

Researchers also reported that a component of the innate immune system played a key role in driving proliferation rather than inflammation. The protein named toll-like receptor 2 (TLR2) helps cells recognize and defend against bacteria. Evidence from this study suggested that TLR2 partners with a related protein, TLR6, to drive proliferation in response to bacterial cell wall.

Without TLR2, immature fetal neurons did not proliferate. Researchers also reported that proliferation did not occur in fetal mice that lacked either PAFr or TLR2, suggesting that both proteins play a role in the brain’s response to bacterial cell wall.

“Additional research is needed to understand how bacterial cell wall signaling induces proliferation via this newly identified pathway that links the innate immune receptor TLR2 with the transcription factor FoxG1 to drive neural proliferation in the fetus,” Tuomanen said. “This same mechanism might lead to new strategies to repair or replace neurons lost to illness or injury.”