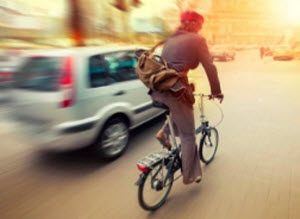 Researchers measured urban bicyclists’ exposure to pollutants while riding along different types of routes. Image Courtesy of: mel-nik/iStock/ThinkstockBy switching from four wheels to two, bicyclists help reduce traffic and air pollution—all while getting much-needed exercise. But that health benefit could be costly, due to exposure to potentially harmful compounds in motor vehicle exhaust. In a first-of-its-kind study, researchers analyzed breath samples to find out how much of these compounds are absorbed by the body. They report their findings in ACS’ Environmental Science & Technology.
Previous reports have suggested that cycling in more rural areas and on off-street paths can reduce exposure to traffic-related toxicants. Absorption of compounds in the body—which can lead to deleterious health effects—is not always directly proportional to exposure, say this study’s researchers. It is a complex analysis because pollution levels and the way the human body processes compounds can vary. A few teams have investigated this for bicyclists, and they focused on the analysis of blood, urine and saliva samples from those riding in urban or rural areas. But until now, no one has looked at bicyclists’ absorption of pollutants while riding on multiple types of routes. So, Alexander Bigazzi and colleagues took a more in-depth look at the issue by using breath analysis.

The researchers studied the breath of three cyclists in Portland, Oregon, who rode on off-street bike paths, local streets with lighter traffic and main streets with heavier traffic. They also measured pollution levels in ambient air. Using a pollution detector mounted on the bicycles, the team found that the on-road exposure levels (above the urban background) of volatile organic compounds, a kind of pollution, were 100 to 200 percent higher when the cyclists took routes through high-traffic or industrial areas as compared to low-traffic or off-street routes. Using breath analysis, the team found that absorbed compounds were 40 to 100 percent higher in these situations. The study confirms that people can reduce their exposure and absorption of these toxicants—and potentially mitigate their health effects—by riding farther away from city traffic.

The researchers acknowledge funding from the National Institute for Transportation and Communities, Portland Metro, the City of Portland and the National Science Foundation.