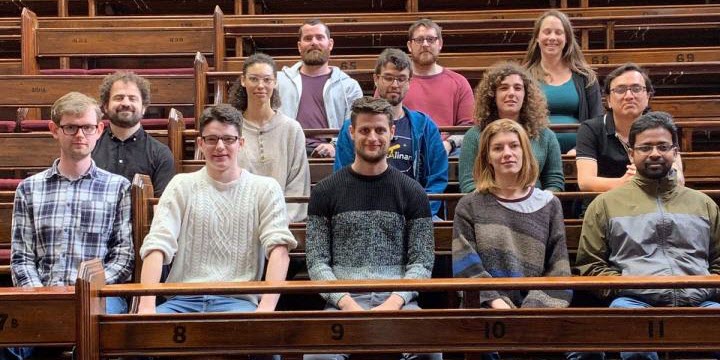 The QuSys group with professor John Goold pictured at the far left in the back row.
Trinity College Dublin

Physicists from Trinity College Dublin have proposed a thermometer based on quantum entanglement that can accurately measure temperatures a billion times colder than those in outer space.

These ultra-cold temperatures arise in clouds of atoms, known as Fermi gases, which are created by scientists to study how matter behaves in extreme quantum states.

Their results have just been published as an Editor's Suggestion in the prestigious journal Physical Review Letters.

Discussing the proposal, Goold, head of Trinity's QuSys group, explains what an ultra-cold gas is.

"The standard way in which a physicist thinks about a gas is to use a theory known as statistical mechanics," he said. "This theory was invented by giants of physics such as Maxwell and Boltzmann in the 19th century. These guys revived an old idea from the Greek philosophers that macroscopic phenomena, such as pressure and temperature, could be understood in terms of the microscopic motion of atoms. We need to remember that at the time, the idea that matter was made of atoms was revolutionary."

At the dawn of the 20th century, another theory came to fruition. This is quantum mechanics and it may be the most important and accurate theory we have in physics. A famous prediction of quantum mechanics is that single atoms acquire wave-like features, which means that below a critical temperature they can combine with other atoms into a single macroscopic wave with exotic properties. This prediction led to a century-long experimental quest to reach the critical temperature. Success was finally achieved in the 90s with the creation of the first ultra-cold gases, cooled with lasers (Nobel Prize 1997), and trapped with strong magnetic fields—a feat which won the Nobel Prize in 2001."

"Ultra-cold gases like these are now routinely created in labs worldwide and they have many uses, ranging from testing fundamental physics theories to detecting gravitational waves. But their temperatures are mind-bogglingly low at nanokelvin and below! Just to give you an idea, one kelvin is -271.15 degrees Celsius. These gases are a billion times colder than that—the coldest places in the universe—and they are created right here on Earth."

So what exactly is a Fermi gas?

"All particles in the universe, including atoms, come in one of two types called 'bosons' and 'fermions,'" Goold says. "A Fermi gas comprises fermions, named after the physicist Enrico Fermi. At very low temperatures, bosons and fermions behave completely differently. While bosons like to clump together, fermions do the opposite. They are the ultimate social distancers! This property actually makes their temperature tricky to measure."

Mitchison, the first author of the paper, explains:

"Traditionally, the temperature of an ultra-cold gas is inferred from its density: at lower temperatures the atoms do not have enough energy to spread far apart, making the gas denser. But fermions always keep far apart, even at ultra-low temperatures, so at some point the density of a Fermi gas tells you nothing about temperature.

Instead, we proposed using a different kind of atom as a probe. Let's say that you have an ultra-cold gas made of lithium atoms. You now take a different atom, say potassium, and dunk it into the gas. Collisions with the surrounding atoms change the state of your potassium probe and this allows you to infer temperature. Technically speaking, our proposal involves creating a quantum superposition: a weird state where the probe atom simultaneously does and doesn't interact with the gas. We showed that this superposition changes over time in a way that is very sensitive to temperature."

"A thermometer is just a system whose physical properties change with temperature in a predictable way. For example, you can take the temperature of your body by measuring the expansion of mercury in a glass tube. Our thermometer works in an analogous way, but instead of mercury we measure the state of single atoms that are entangled (or correlated) with a quantum gas."

"This isn't just a far-flung idea—what we are proposing here can actually be implemented using technology available in modern atomic physics labs. That such fundamental physics can be tested is really amazing. Among the various emerging quantum technologies, quantum sensors like our thermometer are likely to make the most immediate impact, so it is a timely work and it was highlighted by the editors of Physical Review Letters for that reason."

"In fact, one of the reasons that this paper was highlighted was precisely because we performed calculations and numerical simulations with a particular focus on an experiment that was performed in Austria and published a few years ago in Science. Here the Fermi gas is a dilute gas of trapped lithium atoms which were in contact with potassium impurities. The experimentalists are able to control the quantum state with radio frequency pulses and measure out information on the gas. These are operations that are routinely used in other quantum technologies.

The timescales that are accessible are simply amazing and would be unprecedented in traditional condensed matter physics experiments. We are excited that our idea to use these impurities as a quantum thermometer with exquisite precision could be implemented and tested with existing technology."