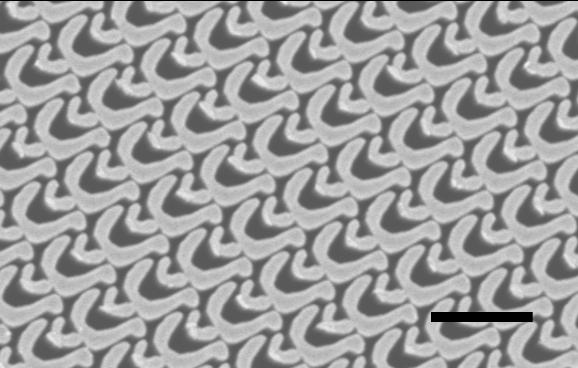 An SEM image of the device shows the irregular nanostructures created during the inverse design process.
Image courtesy of Zhujun Shi, Harvard SEAS

Polarization, the direction in which light vibrates, is invisible to the human eye. Yet, so much of our optical world relies on the control and manipulation of this hidden quality of light.

Materials that can manipulate the polarization of light—known as birefringent materials—are used in everything from digital alarm clocks to medical diagnostics, communications, and astronomy.

Now, researchers from the Harvard John A. Paulson School of Engineering and Applied Sciences have designed a metasurface that can be continuously tuned from linear to elliptical birefringence, opening up the entire space of polarization control with just one device. This single metasurface can operate as many birefringent materials in parallel, enabling more compact polarization manipulation, which could have far-reaching applications in polarization imaging, quantum optics, and other areas.

The research is published in Science Advances.

"It is a new type of birefringent material," said Zhujun Shi, a former graduate student at SEAS and first author of the paper. "We are able to tailor broad polarization behavior of a material beyond what naturally exists, which has a lot of practical benefits. What used to require three separate conventional birefringent components now only takes one."

"The ability to manipulate a fundamental property of light like polarization in completely new ways with a device that is compact and multifunctional will have important applications for quantum optics and optical communications," said Federico Capasso, Robert L. Wallace Professor of Applied Physics and Vinton Hayes Senior Research Fellow in Electrical Engineering at SEAS and senior author of the paper.

Metasurfaces are arrays of nanopillars spaced less than a wavelength apart that can perform a range of tasks, including manipulating the phase, amplitude and polarization of light. In the past, Capasso and his team have designed these highly ordered surfaces from the ground up, using simple geometric shapes with only a few design parameters.

In this research, however, the team turned to a new type of design technique known as topological optimization.

"Topological optimization is an inverse approach," said Shi. "You start with what you want the metasurface to do and then you allow the algorithm to explore the huge parameter space to develop a pattern that can best deliver that function."

The result was surprising. Instead of neatly ordered rectangular pillars standing like toy soldiers, this metasurface is composed of nested half circles reminiscent of crooked smiley faces—more like something a toddler would draw than a computer.

But these odd shapes have opened up a whole new world of birefringence. Not only can they achieve broad polarization manipulations like transforming linear polarization into any desired elliptical polarization but the polarization can also be tuned by changing the angle of the incoming light.

"Our approach has a wide range of potential applications across industry and scientific research, including polarization aberration correction in advanced optical systems," said Capasso.

- This press release was originally published on the Harvard John A. Paulson School of Engineering and Applied Sciences website