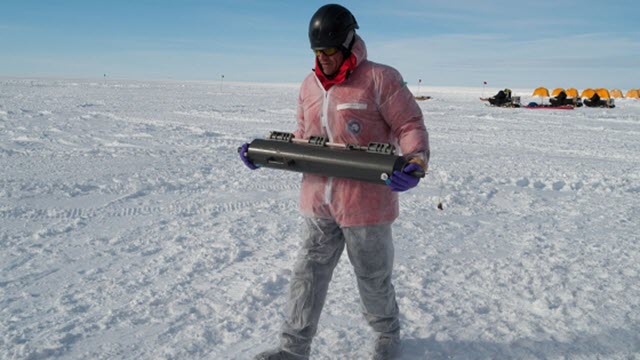 Renowned Montana State University polar scientist John Priscu and a team of researchers from more than a dozen universities will begin the new year hunting for microbes and other living specimens in a lake far beneath the surface of the Antarctic ice sheet.

The expedition, known as SALSA (Subglacial Antarctic Lakes Scientific Access), is highlighted in “The Hunt for Life Below Antarctic Ice,” a story written by Douglas Fox in the Dec. 12 issue of Nature, an international science journal.

In the article, Fox shares details of the Priscu-led search for microorganisms and other living specimens that live in the dark waters of Mercer Subglacial Lake. The lake, which measures nearly 62 square miles, was discovered more than a decade ago through satellite images but has never before been explored.

Priscu is among 45 scientists, drillers and support staff who make up the expedition team. In Antarctica, about 370 miles from the South Pole, the team will spend the next few weeks working together to drill 4,000 feet to the bottom of the ice sheet that covers Mercer. Once through, they will collect water and mud samples that they hope will be teeming with living organisms.

This is the second such expedition for Priscu, a Montana University System Regents Professor in the Department of Land Resources and Environmental Sciences in MSU’s College of Agriculture who studies the microbial ecology of Antarctic ecosystems.

In 2013, he and other MSU researchers published the discovery of microscopic life in Subglacial Lake Whillans in the journal Nature and received worldwide attention. It was named one of the top science stories of 2013 by Discover magazine.

Fox writes that the scientists leading the project hope that the Lake Mercer ecosystems will shed light on what kind of life can survive in such remote regions and serve as an on-Earth comparison for habitats deep inside Mars or on the ice-covered moons of Jupiter and Saturn.

While Mercer will be the second subglacial lake that humans have sampled directly, Fox wrote, it will be the first time scientists will use a remote vehicle to roam beneath the ice sheet, which leads the scientists to wonder if the submersible’s three video cameras might capture images of animals that live in the dark water.

“We don’t know what’s going to be there,” Priscu said in the story. “That’s what makes it so much fun.”