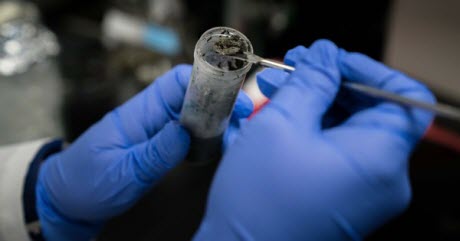 Scientists are identifying and characterizing more microbes each year using DNA sequencing technologies. As each new species is sequenced, scientists add it to the microbial “tree of life,” creating a virtual census of what’s there.

Turns out it’s not an easy job. To put things in perspective, scientists aren’t sure how many microbes even exist. Estimates vary widely from millions to trillions.

The Parcubacteria were found in sediment samples collected by James Cameron within the Challenger Deep region of the Mariana Trench during the Deepsea Challenge Expedition. Leon-Zayas’ doctoral advisor, Doug Bartlett at Scripps Institution of Oceanography, was a chief scientist on the expedition.

“From a scientific perspective, Challenger Deep was an invaluable opportunity to collect samples from the deepest part of the ocean,” said Leon-Zayas, the paper’s lead author, now an assistant professor at Willamette University.

Scientists traditionally have learned how microbes work by growing and studying them in petri dishes and beakers. It wasn’t until DNA sequencing advanced to include the ability to separate and test microbes present in environmental samples (such as soils or sediments) that scientists realized they had missed a huge portion of bacteria now called the Candidate Phyla Radiation (CPR).

One group of CPR microbes called the Parcubacteria had been seen in the groundwater and shallow sediments of a few places on land, but it had only been intensively studied in sediment samples from an aquifer near Rifle, Col.

When Cameron collected sediment samples at the bottom of the trench, the scientists discovered that many different species of Parcubacteria live there, too.

“We were interested in seeing if the microbes living at the bottom of the ocean had the same lifestyle as the microbes living in soils in Rifle, Colorado,” said Biddle, a marine microbiologist and associate professor in the College of Earth, Ocean, and Environment’s School of Marine Science and Policy.

Leon-Zayas used a sorting technique to separate the microbial cells from the sediment particles so that scientists could amplify and sequence the microbe DNA. The researchers then characterized the individual microbial genomes. Based on the genes that are present in the genome—sections of DNA that define what metabolisms a cell is capable of—scientists can infer what the bacteria is doing.

This genomic sequencing revealed that Parcubacteria from the deep sea have a fairly simple metabolism; but the genomes were larger than that of their terrestrial cousins and even had a few extra features. In particular, these features indicated the bacteria may be able to perform anaerobic respiration, using things like nitrate to breathe instead of oxygen.

Parcubacteria also seemed to have more proteins and enzymes associated with cold environments, not surprising since the bottom of the Mariana Trench is cold and dark.

“It makes sense that organisms at the bottom of the ocean might have to be more self-sufficient. The environment is extreme and there isn’t as much food,” Biddle said.

While the discovery adds a new branch on the microbial family tree, many unanswered questions remain.

According to Biddle, who is part of a UD team that recently earned a Keck Foundation grant to dive deep into microbial research, DNA sequencing has revealed a huge new area of microbiology that was unknown a decade ago.

Rapid technology development has been key to the field’s advancement, she said, from the development of submersibles capable of transporting scientists to the bottom of the trench, to new sophisticated instruments, like flow cytometers, that help scientists sort, sequence and analyze the tiniest of organisms.

The more scientists discover, however, the more they realize there is to learn.

In addition to Biddle and Leon-Zayas, other co-authors on the paper included Douglass H. Bartlett, Logan Peoples and Sheila Podell from Scripps Institution of Oceanography at University of California, San Diego; Roger S. Lasken and Mark Novotny from J. Craig Venter Institute; and James Cameron of Earthship Productions.