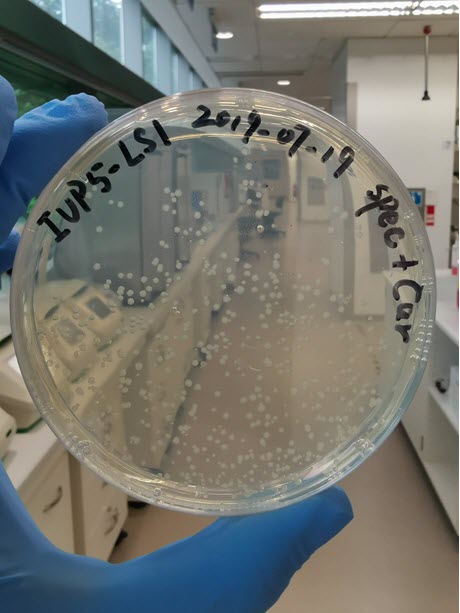 A a petri dish with colonies growing microbial cells (factories).Credit: DiSTAP, SMART (MIT's research enterprise in Singapore)Singapore, July 25, 2019 — Researchers at SMART, MIT's research enterprise in Singapore, and National University of Singapore (NUS) have developed a technology that greatly accelerates the genetic engineering of microbes that can be used to manufacture chemicals used for urban farming. The new technology will result in a faster, cheaper, more accurate, and near-scarless plasmid construction, using standard and reusable parts, that is compatible with most popular DNA assembly methods.

Explained in a paper titled "A standard for near-scarless plasmid construction using reusable DNA parts," which will be published this month in the prestigious academic journal, Nature Communications, the project is part of the SMART Interdisciplinary Research Group (IRG) - Disruptive & Sustainable Technologies for Agricultural Precision (DiSTAP). The IRG develops new technologies to enable Singapore, a city-state which is dependent upon imported food and produce, to improve their agriculture yield to reduce external dependencies.

Kang Zhou, a DiSTAP principal investigator who is also an assistant professor at the NUS Department of Chemical and Biomolecular Engineering (ChBE) and Xiaoqiang Ma, a postdoctoral associate at SMART, led the development of the technology while working on ways to support their colleagues who were working on enhancing vegetable yield in the country's urban farms. They were exploring ways on microbial fermentation which create fertilizers, nutrients and non-synthetic pesticides for urban farms, in the form of small molecules.

"The objective of this study was to create a technology that can engineer microbes faster and at a lower cost," said Ma. "Current technology is expensive and time-consuming. Researchers have to order customized materials from suppliers which takes a while to arrive. They also often use only one percent of the material, leading to wastage. As each material is customized, researchers have to re-order each time, which further delays and add costs to the production."

The new guanine/thymine (GT) DNA assembly technology significantly changes things by enabling genetic engineers to reuse genetic materials. It provides a simple method to define the biological parts as standard DNA parts. Further, unlike previous attempts at creating standardized materials which have an accuracy of up to 50 percent, the GT technology is able to reach an accuracy of close to 90 percent. As a near-scarless plasmid construction, the technology is substantially faster, being able to stitch up to seven parts to a DNA as opposed to only two parts for other methods of similar accuracy.

"Being able to provide an accuracy of close to 90 percent for genetic materials while connecting up to seven parts to a DNA is a game-changer in the creation of genetic materials by using standard parts," said Zhou. "We anticipate that the huge cost and time savings will enable the development of new fermentation processes that can manufacture green chemicals to make urban farming in Singapore more efficient and safer. This technology is also applicable to all genetic engineering fields outside of agriculture, and we are actively looking at ways we can deploy it for easy access."

In addition to commercialization plans, the researchers are also planning to set up an e-commerce platform which can quickly create and distribute these genetic materials to researchers around the world. It will be the first such platform for reusable genetic engineering materials in the world.