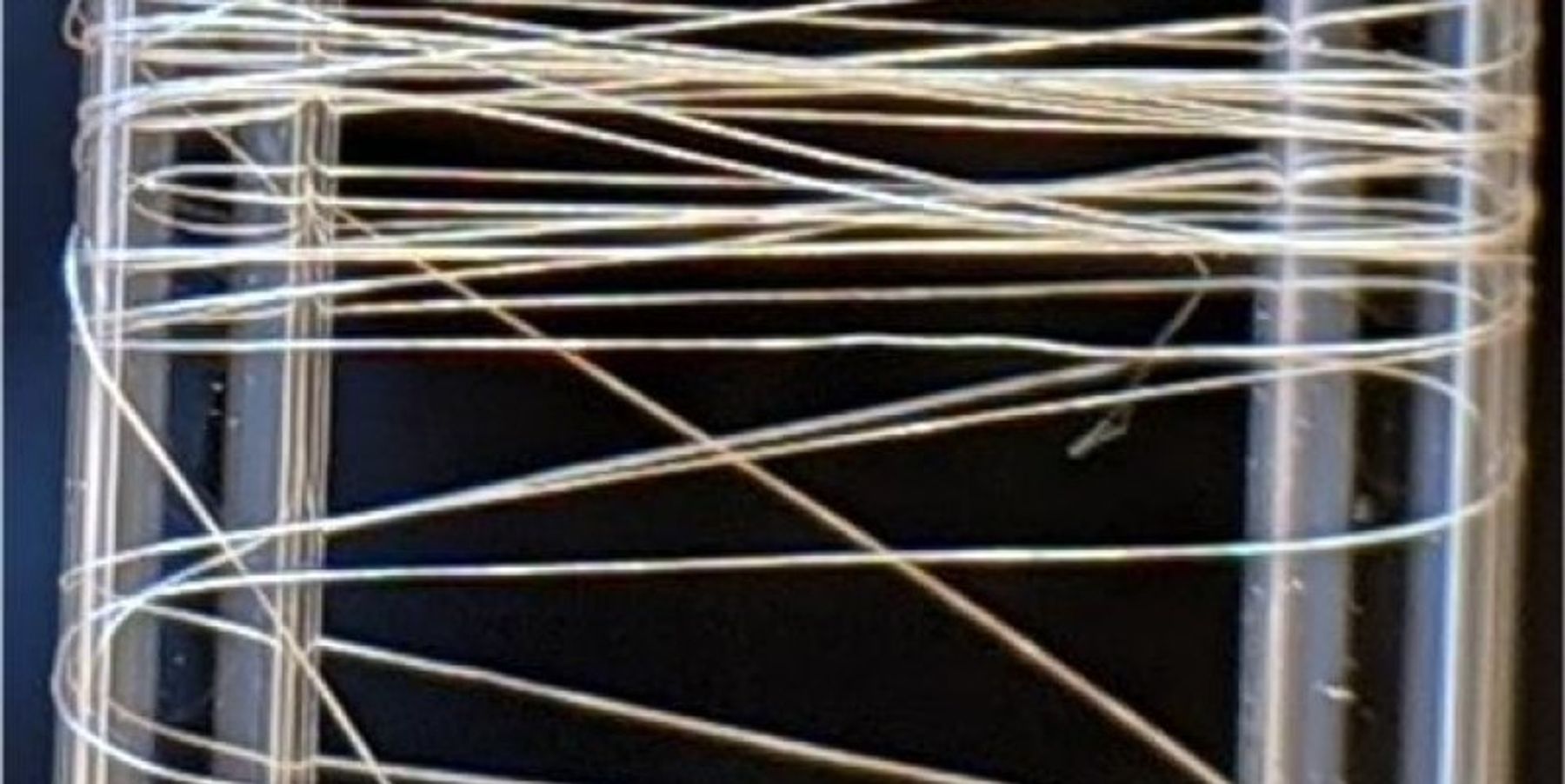 The 128-repeat proteins resulted in a fiber with gigapascal strength which is stronger than common steel. The fibers' toughness is higher than Kevlar and all previous recombinant silk fibers. Its strength and toughness are even higher than some reported natural spider silk fibers.
Washington University in St. Louis/Jingyao Li

Spider silk is said to be one of the strongest, toughest materials on the Earth. Now engineers at Washington University in St. Louis have designed amyloid silk hybrid proteins and produced them in engineered bacteria. The resulting fibers are stronger and tougher than some natural spider silks.

Their research was published in the journal ACS Nano.

To be precise, the artificial silk—dubbed "polymeric amyloid" fiber—was not technically produced by researchers, but by bacteria that were genetically engineered in the lab of Fuzhong Zhang, a professor in the Department of Energy, Environmental & Chemical Engineering in the McKelvey School of Engineering.

Zhang has worked with spider silk before. In 2018, his lab engineered bacteria that produced a recombinant spider silk with performance on par with its natural counterparts in all of the important mechanical properties.

"After our previous work, I wondered if we could create something better than spider silk using our synthetic biology platform," Zhang said.

The research team, which includes first author Jingyao Li, a PhD student in Zhang's lab, modified the amino acid sequence of spider silk proteins to introduce new properties, while keeping some of the attractive features of spider silk.

To solve this problem, the team redesigned the silk sequence by introducing amyloid sequences that have high tendency to form β-nanocrystals. They created different polymeric amyloid proteins using three well-studied amyloid sequences as representatives. The resulting proteins had less repetitive amino acid sequences than spider silk, making them easier to be produced by engineered bacteria. Ultimately, the bacteria produced a hybrid polymeric amyloid protein with 128 repeating units. Recombinant expression of spider silk protein with similar repeating units has proven to be difficult.

The longer the protein, the stronger and tougher the resulting fiber. The 128-repeat proteins resulted in a fiber with gigapascal strength (a measure of how much force is needed to break a fiber of fixed diameter), which is stronger than common steel. The fibers' toughness (a measure of how much energy is needed to break a fiber) is higher than Kevlar and all previous recombinant silk fibers. Its strength and toughness are even higher than some reported natural spider silk fibers.

In collaboration with Young- Shin Jun, professor in the Department of Energy, Environmental & Chemical Engineering, and her PhD student Yaguang Zhu, the team confirmed that the high mechanical properties of the polymeric amyloid fibers indeed come from the enhanced amount of β-nanocrystals.

These new proteins and the resulting fibers are not the end of the story for high performance synthetic fibers in the Zhang lab. They are just getting started. "This demonstrates that we can engineer biology to produce materials that beat the best material in nature," Zhang said.

- This press release was originally published on the Washington University in St. Louis website