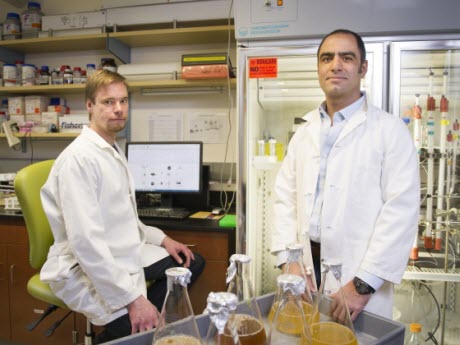 “Bacteria get viral infections just like humans do,” Wiedenheft said. “Recently we discovered that bacteria have sophisticated immune systems, called CRISPRs, and our work aims to understand how these immune systems work.”

Scientists have known for years that bacteria have the ability to fight off invading viruses but considered their immune systems to be relatively primitive. However, the discovery in recent years of CRISPRs, an acronym for “clustered regularly-interspaced short palindromic repeats,” changed that perception.

“CRISPRs provide a molecular memory of previously encountered viruses, which is used to rapidly mount an immune response upon subsequent encounters with an infectious agent,” Wiedenheft said. “This is conceptually similar to our own immune systems.”

“A publication in Nature is a major achievement for Blake and our graduate student, Paul,” said Nicol C. Rae, dean of the College of Letters and Science. “This confirms that he is one of our outstanding junior faculty members in the biomedical sciences.”

“Blake’s research is at the forefront of one of the more exciting areas of science, and even though he is early in his career, he is one of the international leaders in this field,” said Mark Jutila, head of the MSU Department of Microbiology and Immunology. “Blake is part of an exciting group of new faculty members in the department who have greatly expanded cutting edge research opportunities for students and other trainees.”

The research published in Nature brings to light an understanding of how CRISPRs differentiate virus’ DNA from its own genetic material. Without this ability, the anti-viral measures would damage the host cell.

“Targeting the foreign DNA stored in the bacterial genome would result in an auto-immune reaction that would kill or at least make the bacteria very sick,” Wiedenheft said. “The work in this paper explains how the immune system in Escherichia coli (E. coli) differentiates between the bacteria’s own genetic material and that of the virus.”

“This collaboration with scientists from Cornell and Johns Hopkins universities was a fantastic opportunity to contribute to a growing body of literature aimed at understanding the mechanisms of DNA detection. This collaboration lays the ground work for some of my future work in this area,” van Erp said.

To understand how these immune systems distinguish “self” DNA from “non-self,” researchers used a technique called X-ray crystallography to create a detailed blueprint of the immune systems’ surveillance complex while recognizing a piece of foreign DNA.

“These blueprints, which are conceptually similar to a builder’s blueprint, explain how these biological machines work,” Wiedenheft said. “We are now trying to use these blueprints to engineer this system for novel applications that Mother Nature never expected.”

Understanding how CRISPRs work in bacteria has led to a transformative new technology that has profound implications in biotechnology and in medicine. In bacteria, CRISPRs bind to and slice up foreign DNA, preventing it from establishing an infection in bacterial cells. Understanding precisely how this system works has enabled scientists “to repurpose these DNA-cleaving systems to perform surgery on DNA,” Wiedenheft said.

“CRISPR systems have now been moved into human cells, and we can now program these systems to cut out and repair defective DNA in human cells,” he said.

These technologies have potential to be used in ways that could eliminate genetic diseases, such as muscular dystrophy and cystic fibrosis. Already, there are large commercial investments in CRISPR applications in the United States and overseas.

“With support from Montana State University and the National Institutes of Health, and involvement of talented graduate students like Paul [B.G. van Erp], my lab has helped explain how these systems work,” Wiedenheft said. “And knowing how they work is a critical first step in reprogramming them for novel applications.”