Bacteria can perceive how many they are. They release and sense signaling molecules that accumulate with increasing cell numbers, which allows them to change their behavior when a certain group size is reached. A team of researchers from the Max Planck Institute for Terrestrial Microbiology in Marburg and Heidelberg University has now been able to show that bacteria might be capable of even more: they could perceive the proportions of different groups of bacteria in their environment.

In nature, bacteria often live in complex communities, surrounded by other cells that can differ from each other, even within a species. The principal investigator, Ilka Bischofs, explains: "Imagine yourself in a ballroom full of people. Their sheer number is only of limited relevance to you; it is the gender ratio that tells you how hard it will be to find a dancing partner. Bacteria also collect information about their environment. Information about group ratios could help them make decisions and adapt in the best possible way." 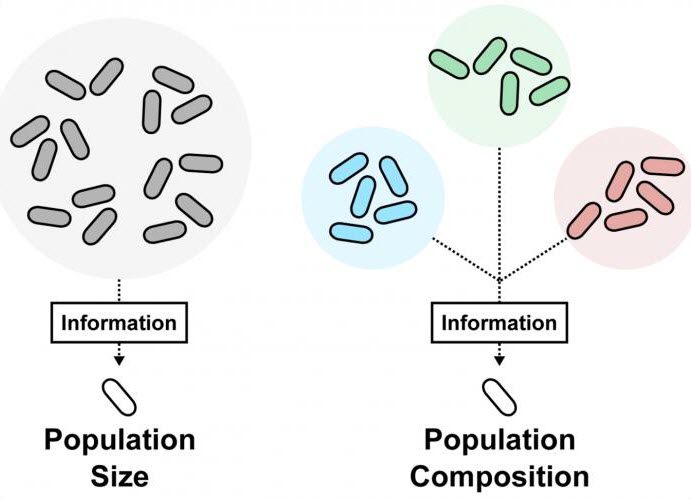 The research team studied information retrieval in the bacterium Bacillus subtilis. This species possesses a large number of identically constructed chemical signaling systems that were previously thought to measure cell numbers. Instead the bacteria may utilize these systems to determine the proportions of different groups within a mixed population. The respective signaling molecules are often produced by a subset of cells, but are taken up by all bacteria. Therefore, cells compete with each other for the signaling molecules. The larger the ratio of signal producers in the population, the more signaling molecules will accumulate in the cells where they are being detected. However, as with computers, the specific function of a system depends on its settings.

The ratio-sensing ability could confer decisive advantages to the bacterium. As research in recent years has shown, Bacillus subtilis often splits its population into subgroups of cells with different properties and functions. Similar to a stock broker, the bacterium diversifies its portfolio of phenotypes. Knowing the composition of a portfolio obviously enables to respond adequately to environmental changes—a strategy that bacteria may have already discovered during evolution.