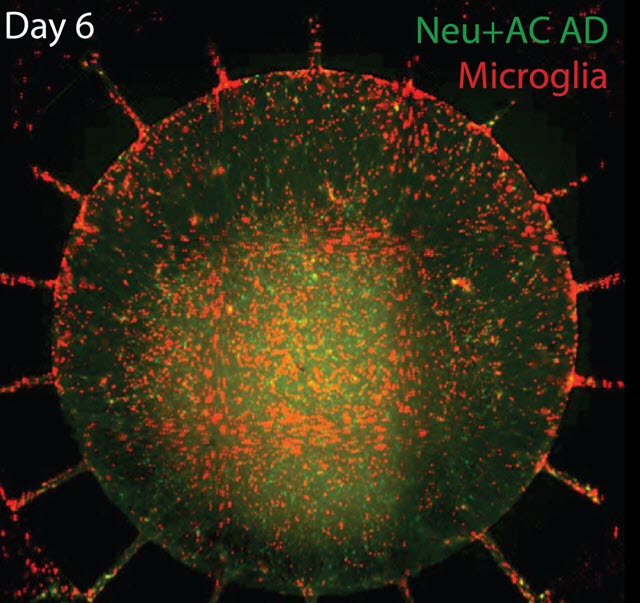 Building on their development of the first culture system to replicate fully the pathology behind Alzheimer's disease, a Massachusetts General Hospital (MGH) research team has now produced a system that includes neuroinflammation, the key biological response that leads to the death of brain cells. The investigators describe their system, which incorporates the glial cells that that not only surround and support neurons but also provide some immune system functions, in a paper published in Nature Neuroscience.

"Our original 'Alzheimer's in a dish ' system recapitulated the plaques and tangles typically seen the brains of patients with Alzheimer's disease, but did not induce neuroinflammation," says Rudolph Tanzi, PhD, director of the Genetics and Aging Research Unit in the MassGeneral Institute for Neurodegenerative Disease (MIND) and co-senior author of the current paper. "Studies have shown that we can have many plaques and tangles in our brains with no symptoms, but when neuroinflammation kicks in, exponentially more neurons die and cognitive impairment leading to dementia is induced. A complete model of Alzheimer's pathology needs to incorporate that 'third leg of the stool'."

In their 2014 Nature paper, the MGH team described using a gel-based, three-dimensional culture system —developed by Doo Yeon Kim, PhD, of the Genetics and Aging Unit, also a co-senior author of the current study—to induce the formation of both amyloid-beta plaques and neurofibrillary tangles in human neural cells carrying gene variants associated with early-onset, familial Alzheimer's disease (FAD). That study confirmed that amyloid deposition was the essential first step leading to the formation of tangles containing the pathogenic form of the protein tau

The updated system also brings in technology developed by co-senior author Hansang Cho, PhD, now of the University of North Carolina at Charlotte, when he was a postdoctoral fellow in the MGH BioMEMS Resource Center. In a 2013 Scientific Reports paper, Cho and his co-authors reported using a microfluidic device consisting of two circular chambers, one inside the other, to measure the migration of microglia—glial cells that function as nervous system immune cells—from the outer chamber into the amyloid-loaded inner chamber by means of connecting channels.

For the current study Cho and lead author Joseph Park, PhD, of the MGH Genetics and Aging Unit, used the 'Alzheimer's in a dish' system to culture neural stem cells with FAD variants in the central chamber of Cho's device. Several weeks later, the neurons and astrocytes, glial cells that support and insulate neurons, that had differentiated were found to contain elevated levels of amyloid-beta and tau, as well as inflammatory factors known to contribute to the neuroinflammation seen in Alzheimer's disease.

When human microglia were added to the outer chamber of the device, they soon began to show structural changes signifying their activation and migrate through the channels into the inner chamber. Once the microglia arrived in the inner chamber, they directly attacked neurons, causing visible damage to key structures, while levels of inflammatory factors like TNF-alpha, IL-6 and IL-8 rose significantly. Six days later the central chambers had lost 20 percent of both their neurons and their astrocytes.

"We also found that blocking two receptors in microglial cells—interferon receptor gamma and toll-like receptor 4—could prevent neuroinflammation, which opens up new opportunities for drug discovery," says Tanzi, who is the Joseph P. and Rose F. Kennedy Professor of Neurology at Harvard Medical School. "This system should help us better understand the timeline by which these pathological events lead to dementia and enable us to screen for drugs that stop plaque deposition, tangle formation and the resultant neuroinflammation."