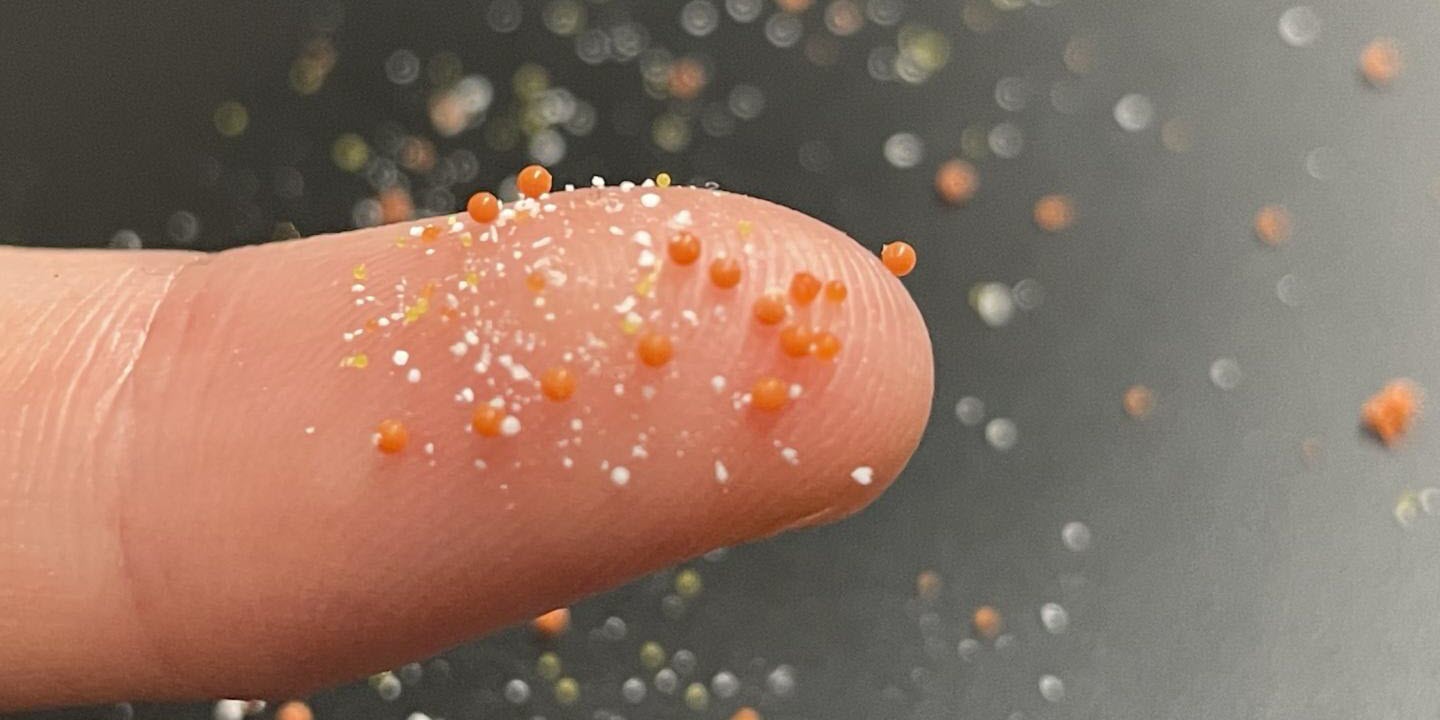 A single use of a facial exfoliator can release 5,000 - 100,000 microplastics to the environment.
NJIT

It's estimated that an average-sized wastewater treatment plant serving roughly 400,000 residents will discharge up to 2,000,000 microplastic particles into the environment each day. Yet, researchers are still learning the environmental and human health impact of these ultra-fine plastic particles, less than five millimeters in length, found in everything from cosmetics, toothpaste, and clothing microfibers, to our food, air, and drinking water.

Now, researchers at New Jersey Institute of Technology (NJIT) have shown that ubiquitous microplastics can become 'hubs' for antibiotic-resistant bacteria and pathogens to grow once they wash down household drains and enter wastewater treatment plants—forming a slimy layer of buildup, or biofilm, on their surface that allows pathogenic microorganisms and antibiotic waste to attach and comingle.

In findings published in Elsevier's Journal of Hazardous Materials Letters, researchers found certain strains of bacteria elevated antibiotic resistance by up to 30 times while living on microplastic biofilms that can form inside activated sludge units at municipal wastewater treatment plants.

"A number of recent studies have focused on the negative impacts that millions of tons of microplastic waste a year is having on our freshwater and ocean environments, but until now the role of microplastics in our towns' and cities' wastewater treatment processes has largely been unknown," said Mengyan Li, associate professor of chemistry and environmental science at NJIT and the study's corresponding author. "These wastewater treatment plants can be hotspots where various chemicals, antibiotic-resistant bacteria and pathogens converge and what our study shows is that microplastics can serve as their carriers, posing imminent risks to aquatic biota and human health if they bypass the water treatment process."

"Most wastewater treatment plants are not designed for the removal of microplastics, so they are constantly being released into the receiving environment," added Dung Ngoc Pham, NJIT PhD candidate and first author of the study. "Our goal was to investigate whether or not microplastics are enriching antibiotic-resistant bacteria from activated sludge at municipal wastewater treatment plants, and if so, learn more about the microbial communities involved."

In their study, the team collected batches of sludge samples from three domestic wastewater treatment plants in northern New Jersey, inoculating the samples in the lab with two widespread commercial microplastics—polyethylene (PE) and polystyrene (PS). The team used a combination of quantitative PCR and next-generation sequencing techniques to identify the species of bacteria that tend to grow on the microplastics, tracking genetic changes of the bacteria along the way.

The analysis revealed that three genes in particular—sul1, sul2, and intI1—known to aid resistance to common antibiotics, sulfonamides, were found to be up to 30 times greater on the microplastic biofilms than in the lab's control tests using sand biofilms after just three days.

When the team spiked the samples with the antibiotic, sulfamethoxazole (SMX), they found it further amplified the antibiotic resistance genes by up to 4.5-fold. 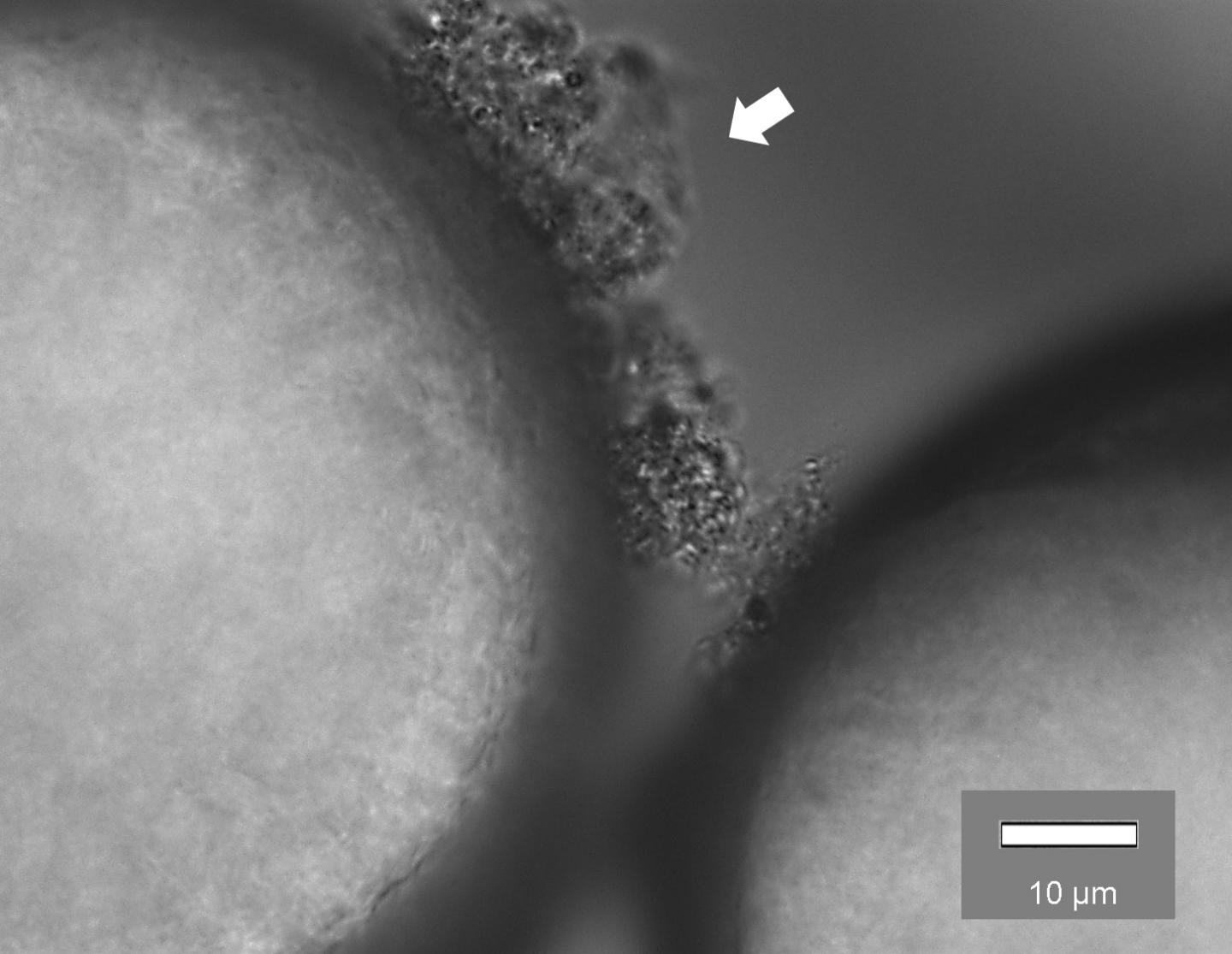 The team say the most common strain found on the microplastics by far, Novosphingobium pokkalii, is likely a key initiator in forming the sticky biofilm that attracts such pathogens—as it proliferates it may contribute to the deterioration of the plastic and expand the biofilm. At the same time, the team's study highlighted the role of the gene, intI1, a mobile genetic element chiefly responsible for enabling the exchange of antibiotic resistance genes among the microplastic-bound microbes.

"We might think of microplastics as tiny beads, but they provide an enormous surface area for microbes to reside," explained Li. "When these microplastics enter the wastewater treatment plant and mix in with sludge, bacteria like Novosphingobium can accidentally attach to the surface and secrete glue-like extracellular substances. As other bacteria attach to the surface and grow, they can even swap DNA with each other. This is how the antibiotic resistance genes are being spread among the community."

"We have evidence that the bacteria developed resistance to other antibiotics this way as well, such as aminoglycoside, beta-lactam and trimethoprim," added Pham.

Now, Li says the lab is further studying the role of Novosphingobium in biofilm formation on microplastics. The team is also seeking to better understand the extent to which such pathogen-carrying microplastics may be bypassing water treatment processes, by studying resistance of microplastic biofilms during wastewater treatment with disinfectants such as UV light and chlorine.

"Some states are already considering new regulations on the use of microplastics in consumer products. This study raises calls for further investigation on microplastic biofilms in our wastewater systems and development of effective means for removing microplastics in aquatic environments," said Li.

- This press release was originally published on the NJIT website. It has been edited for style