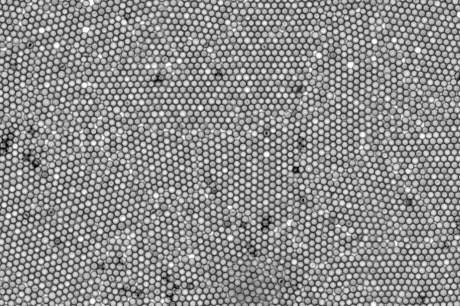 A collection of small 2D colloidal crystals with grain boundaries between them. Spherical glass particles (10 μm diameter) in water.Image credit: Zephyris, Wikimedia CommonsAll materials found in nature—even the most “perfect” diamond—contain defects, since the atoms inside them are never arranged in perfect order.

Such structural disorder causes complex force distributions throughout the material. Measuring these forces is critical to understanding the material’s behavior, but these force measurements have been impossible to perform through conventional techniques, which only determine average responses to stress.

A research team led by associate professor Itai Cohen and professor James Sethna, both of physics at Cornell, has proposed a new method to measure such forces within colloidal materials. Colloids are made up of micron-sized spheres that are small enough to undergo random motions and crystalize just like atoms. However, they are large enough, and move slowly enough, to be optically imaged.

Using their new method, the scientists have determined the forces surrounding defects in crystals. Their measurements open the door to understanding how the bulk mechanics of these crystals arise from defect interactions.

Their work, “Measuring Nonlinear Stresses Generated by Defects in 3D Colloidal Crystals,” is reported in the Aug. 1 edition of Nature Materials. Neil Y.C. Lin and Matthew Bierbaum, both physics graduate students, are co-lead authors of the study. Peter Schall, professor of physics at the University of Amsterdam, The Netherlands, also contributed to the work.

The group developed a technique called stress assessment from local structural anisotropy, or SALSA, which transforms a high-speed confocal microscope into a sort of pressure gauge. The microscope images the suspension structure and locates all the particle positions in 3-D.

The group uses the particles’ positions to determine how likely they are to collide. The more collisions a particle feels from a given neighbor, the more force is exerted from that neighbor’s direction.

“You take an image of the particles, and from that image, you can figure out what all the forces are on each particle,” Cohen said. “This procedure allows us to determine the force distribution in the entire suspension, on the single-particle scale. That’s interesting for understanding how defects in crystals interact with one another.”

With this powerful tool, the research team for the first time was able to clearly visualize the force field due to local compressions and distortions arising from vacancies, due to missing particles, or grain boundaries between misaligned crystalline domains. Before SALSA, such force fields have been primarily studied using theory and simulations.

“SALSA has allowed us to measure nonlinear responses right near the defect core, which have not been captured by previous theories,” Lin said.

This discovery, he added, helps to better understand the interactions between defects when they are close to one another, which directly determines how hard and resilient a crystal can be.

SALSA also works for measuring stresses found in liquids and glasses, which are inherently disordered compared with a solid, which has a preferred resting state.

“Our technique only cares about the particle positions, not how much they’re distorted relative to some other position,” Cohen said.

With this technique, researchers will be able to place a material under strain and measure its internal force evolution simultaneously. Such experiments will help to understand—even predict—material failures such as fatigue and fracture.

This work was supported by grants from the U.S. Department of Energy and the National Science Foundation, as well as a grant from the Netherlands Organization for Scientific Research.