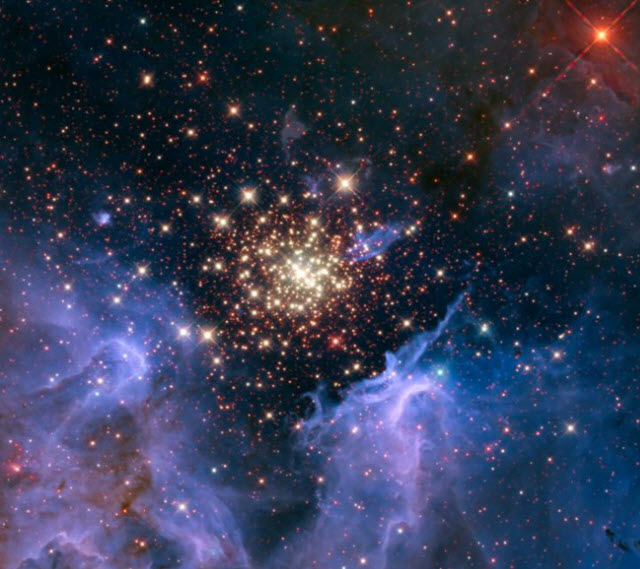 This is a cluster of massive stars seen with the Hubble Space Telescope. The cluster is surrounded by clouds of interstellar gas and dust called a nebula. The nebula, located 20,000 light-years away in the constellation Carina, contains the central cluster of huge, hot stars, called NGC 3603.Image Courtesy of: NASA/U. Virginia/INAF, Bologna, Italy/USRA/Ames/STScI/AURA

Most of the cosmic rays that we detect at Earth originated relatively recently in nearby clusters of massive stars, according to new results from NASA's Advanced Composition Explorer (ACE) spacecraft. ACE allowed the research team to determine the source of these cosmic rays by making the first observations of a very rare type of cosmic ray that acts like a tiny timer, limiting the distance the source can be from Earth.

"Before the ACE observations, we didn't know if this radiation was created a long time ago and far, far away, or relatively recently and nearby," said Eric Christian of NASA's Goddard Space Flight Center in Greenbelt, Maryland. Christian is co-author of a paper on this research published April 21 in Science.

Cosmic rays are high-speed atomic nuclei with a wide range of energy—the most powerful race at almost the speed of light. Earth's atmosphere and magnetic field shield us from less-energetic cosmic rays, which are the most common. However, cosmic rays will present a hazard to unprotected astronauts traveling beyond Earth's magnetic field because they can act like microscopic bullets, damaging structures and breaking apart molecules in living cells. NASA is currently researching ways to reduce or mitigate the effects of cosmic radiation to protect astronauts traveling to Mars.

Cosmic rays are produced by a variety of violent events in space. Most cosmic rays originating within our solar system have relatively low energy and come from explosive events on the Sun, like flares and coronal mass ejections. The highest-energy cosmic rays are extremely rare and are thought to be powered by massive black holes gorging on matter at the center of other galaxies. The cosmic rays that are the subject of this study come from outside our solar system but within our Galaxy and are called galactic cosmic rays. They are thought to be generated by shock waves from exploding stars called supernovae.

The galactic cosmic rays detected by ACE that allowed the team to estimate the age of the cosmic rays, and the distance to their source, contain a radioactive form of iron called Iron-60 (60Fe). It is created inside massive stars when they explode and then blasted into space by the shock waves from the supernova. Some 60Fe in the debris from the destroyed star is accelerated to cosmic-ray speed when another nearby massive star in the cluster explodes and its shock wave collides with the remnants of the earlier stellar explosion.

60Fe galactic cosmic rays zip through space at half the speed of light or more, about 90,000 miles per second. This seems very fast, but the 60Fe cosmic rays won't travel far on a galactic scale for two reasons. First, they can't travel in straight lines because they are electrically charged and respond to magnetic forces. Therefore they are forced to take convoluted paths along the tangled magnetic fields in our Galaxy. Second, 60Fe is radioactive and over a period of about 2.6 million years, half of it will self-destruct, decaying into other elements (Cobalt-60 and then Nickel-60). If the 60Fe cosmic rays were created hundreds of millions of years or more ago, or very far away, eventually there would be too little left for the ACE spacecraft to detect.

"Our detection of radioactive cosmic-ray iron nuclei is a smoking gun indicating that there has likely been more than one supernova in the last few million years in our neighborhood of the Galaxy," said Robert Binns of Washington University, St. Louis, Missouri, lead author of the paper.

"In 17 years of observing, ACE detected about 300,000 galactic cosmic rays of ordinary iron, but just 15 of the radioactive Iron-60," said Christian. "The fact that we see any Iron-60 at all means these cosmic ray nuclei must have been created fairly recently (within the last few million years) and that the source must be relatively nearby, within about 3,000 light years, or approximately the width of the local spiral arm in our Galaxy." A light year is the distance light travels in a year, almost six trillion miles. A few thousand light years is relatively nearby because the vast swarm of hundreds of billions of stars that make up our Galaxy is about 100,000 light years wide.

There are more than 20 clusters of massive stars within a few thousand light years, including Upper Scorpius (83 stars), Upper Centaurus Lupus (134 stars), and Lower Centaurus Crux (97 stars). These are very likely major contributors to the 60Fe that ACE detected, owing to their size and proximity, according to the research team.

ACE was launched on August 25, 1997 to a point 900,000 miles away between Earth and the Sun where it has acted as a sentinel, detecting space radiation from solar storms, the Galaxy, and beyond. This research was funded by NASA's ACE program.