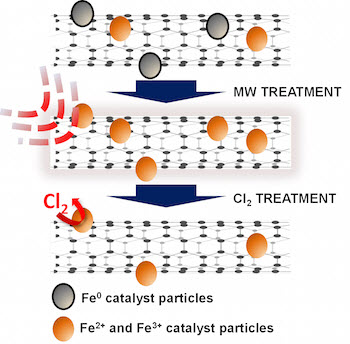 Treatment with a microwave oven and chlorine removes stubborn iron catalyst residues from carbon nanotubes, according to researchers at Rice University and Swansea University. The two-step process may make them more suitable for sensitive applications.Graphic courtesy of Virginia Goméz Jiménez/Swansea UniversityAmid all the fancy equipment found in a typical nanomaterials lab, one of the most useful may turn out to be the humble microwave oven.

A standard kitchen microwave proved effective as part of a two-step process invented at Rice and Swansea universities to clean carbon nanotubes.

Basic nanotubes are good for many things, like forming into microelectronic components or electrically conductive fibers and composites; for more sensitive uses like drug delivery and solar panels, they need to be as pristine as possible.

Nanotubes form from metal catalysts in the presence of heated gas, but residues of those catalysts (usually iron) sometimes remain stuck on and inside the tubes. The catalyst remnants can be difficult to remove by physical or chemical means because the same carbon-laden gas used to make the tubes lets carbon atoms form encapsulating layers around the remaining iron, reducing the ability to remove it during purification.

In the new process, treating the tubes in open air in a microwave burns off the amorphous carbon. The nanotubes can then be treated with high-temperature chlorine to eliminate almost all of the extraneous particles.

The process was revealed in the Royal Society of Chemistry journal RSC Advances. 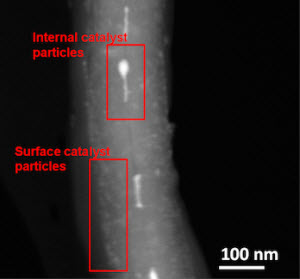 Multiwalled nanotubes before treatment with a Rice University/Swansea University process to remove catalyst residue from their surfaces and from inside.Image Courtesy of Virginia Goméz Jiménez/Swansea UniversityThe labs of chemists Robert Hauge, Andrew Barron and Charles Dunnill led the study. Barron is a professor at Rice in Houston and at Swansea University in the United Kingdom. Rice’s Hauge is a pioneer in nanotube growth techniques. Dunnill is a senior lecturer at the Energy Safety Research Institute at Swansea.

There are many ways to purify nanotubes, but at a cost, Barron said. “The chlorine method developed by Hauge has the advantage of not damaging the nanotubes, unlike other methods,” he said. “Unfortunately, many of the residual catalyst particles are surrounded by a carbon layer that stops the chlorine from reacting, and this is a problem for making high-purity carbon nanotubes.”

The researchers gathered microscope images and spectroscopy data on batches of single-walled and multiwalled nanotubes before and after microwaving them in a 1,000-watt oven, and again after bathing them in an oxidizing bath of chlorine gas under high heat and pressure. They found that once the iron particles were exposed to the microwave, it was much easier to get them to react with chlorine. The resulting volatile iron chloride was then removed. 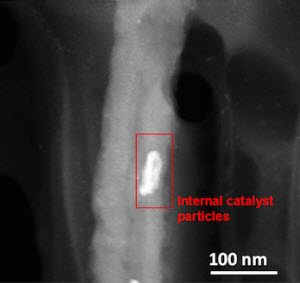 A multiwalled carbon nanotube cleaned with a process developed at Rice University and Swansea University shows iron catalyst residue has been removed from the surface, while most particles have been removed from inside the nanotube's walls. The process is expected to make nanotubes more suitable for applications like drug delivery and solar panels.Courtesy of Virginia Goméz Jiménez/Swansea UniversityEliminating iron particles lodged inside large multiwalled nanotubes proved to be harder, but transmission electron microscope images showed their numbers, especially in single-walled tubes, to be greatly diminished.

“We would like to remove all the iron, but for many applications, residue within these tubes is less of an issue than if it were on the surface,” Barron said. “The presence of residual catalyst on the surface of carbon nanotubes can limit their use in biological or medical applications.”

Co-authors of the study are Virginia Gomez, postdoctoral research assistant at Swansea; Silvia Irusta, a professor at the University of Zaragoza, Spain; and Wade Adams, a senior faculty fellow in materials science and nanoengineering at Rice.

The Robert A. Welch Foundation and the Welsh Government Sêr Cymru Program supported the research.