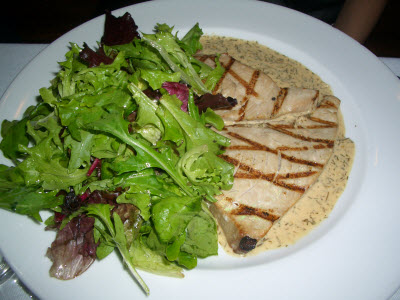 Tuna steak served in a French bistro.Photo credit: Chensiyuan, Wikimedia CommonsBeing able to identify for certain that fish you are about to eat has come closer to reality with a new University of Guelph study on mini-barcoding.

In the study published in Nature – Scientific Reports, researchers at Guelph’s Biodiversity Institute of Ontario (BIO) used mini-barcodes to identify species of fish.

DNA barcoding uses a standard segment of genetic material to identify species of living things. Mini-barcodes are fragments of that standard barcode.

Researchers have struggled to use full-length barcodes when studying processed or cooked fish products. In a previous U of G study, researchers found fish was often misidentified in restaurants and supermarkets.

“This makes it harder to use molecular biology methods to read the full-length barcodes.”

In the new study, the researchers were able to use mini-barcodes containing only about 30 per cent of the standard DNA barcode, even in processed food.

Hajibabaei and a team of BIO researchers first wrote about mini-barcoding in a 2006 study. Since then, the concept has been used in other cases, such as identifying specimens in museum collections.

In this study, researchers worked on fish with the United States Food and Drug Administration (FDA).

“Of the 44 products we tested, 41 could be identified using mini-barcodes,” said post-doctoral researcher Shadi Shokralla, lead author of the paper.

“We only achieved a 20.5-per-cent success rate by using the full-length DNA barcode primers for the same products. Our study is the first to design and implement the real-world application of mini-barcoding for authentication of processed fish products.”

The team wanted to develop an approach for easy identification of fish species in various products, including processed meals, said Shokralla.

“Various stakeholders from agencies such as the FDA or the Canadian Food Inspection Agency to manufacturers to suppliers to retailers and, most importantly, consumers can benefit from our research,” said Shokralla.

DNA sequencing is more accessible today than it ever has been, Hajibabaei added.

“We do still need a lab to conduct the analysis. However, the lab could be set up easily and most of the lab work can be done using accessible and robust equipment and doesn’t require specialists,” Hajibabaei said.

“It is possible to envision a portable sample-to-answer device consumers use to identify and authenticate the contents of their food using DNA analysis. Our study shows that DNA information from very small mini-barcodes can do the job. We just need to miniaturize the lab.”