With seafood, what you see is not always what you get.

It’s no secret that mislabeling is rampant around the world. Recent studies estimate up to 30 percent of seafood served in restaurants and sold in supermarkets is actually something other than what is listed on the menu or label. 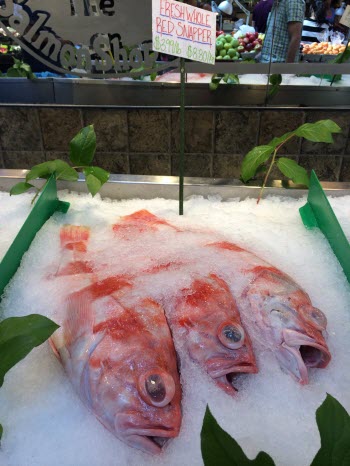 Fish labeled as red snapper are seen on ice in a fish market.Photo credit: Margaret Siple/University of WashingtonWhy mislabeling happens is a little squishier. Fraud, human error, or marketing ploys—combined with an often multicountry traverse from boat to restaurant—make it possible you are eating a different fish than what’s on the menu.

A University of Washington study is the first to broadly examine the ecological and financial impacts of seafood mislabeling. The paper, published online Nov. 2 in Conservation Letters, finds that in most cases, mislabeling actually leads people to eat more sustainably, because the substituted fish is often more plentiful and of a better conservation status than the fish on the label.

“One of the motivations and hopes for this study is that we can help inform people who are trying to exert their consumer power to shift seafood markets toward carrying more sustainable options,” said co-author Christine Stawitz, a UW doctoral student in the School of Aquatic and Fishery Sciences and the Quantitative Ecology and Resource Management program.

The researchers, all UW graduate students in aquatic and fishery sciences, aggregated data from 43 published papers that tested the DNA of fish at various locations, including ports, restaurants, grocery stores, and fish markets to determine whether mislabeling occurred. They then matched the conservation status and estimated price for each of the mislabeled and true fishes listed in the studies.

Related Article: Nearly Half of U.S. Seafood Supply Is Wasted

Their analysis found that true fish are valued at about 97 percent of the mislabeled seafood. That means consumers are paying on average a little more for mislabeled fish.

The study didn’t examine the potential reasons behind this, but the researchers speculate that while it could be intentional mislabeling to rip off consumers, it is just as likely restaurants and markets are serving and stocking fish they think match the label, but are cheaper, more plentiful options. A white-fish filet can look like any number of species, they explained, and substitutions could happen anywhere in the supply chain.

Results from this study could be useful in helping consumers make sustainable purchasing decisions by avoiding fish that are most likely to be mislabeled. That list is led by croakers, shark catfish (or “basa”), sturgeon, and perch. Consumers can also look out for fish commonly replaced with species that are not from sustainable stocks. Examples include eel, hake, and snapper.

These results could also help seafood certification efforts such as the Marine Stewardship Council and the Monterey Bay Aquarium’s Seafood Watch focus efforts on fisheries that are most likely to be mislabeled, the researchers say. The Marine Stewardship Council certifies fisheries for sustainable fishing practices and traceability from the port to markets. A fish often travels from the port to processors and several distributors before reaching the end market, and this change of hands is likely where mislabeling happens, the new study found.

“We hope this study can help certifiers understand where in the chain of custody they should be putting their efforts,” Siple said.

Other co-authors are Stuart Munsch and Qi Lee, both UW graduate students. The study resulted from a UW fisheries research derby, in which graduate students had 48 hours to brainstorm and begin research projects for a pressing fisheries or conservation issue.

This study was funded by the UW’s School of Aquatic and Fishery Sciences and the Washington-British Columbia Chapter of the American Fisheries Society.