Alarming results from a recent gender ratio study revealed that 99 percent of young green turtles from Australia's Northern Great Barrier Reef are female and that male sea turtles are disappearing. Closer to home, researchers from Florida Atlantic University have documented a similar trend in sea turtle hatchlings in southeast Florida. Since 2002, they have studied sea turtles in Palm Beach County and discovered that 97 to 100 percent of the hatchlings have been female.

In a study published in Zoology, FAU researchers are the first to show why and how moisture conditions inside the nest affect the development and sex ratios of turtle embryos. They are the first to estimate sex ratios using a male-specific, transcriptional molecular marker Sox9, a marker of testis development in sea turtles and freshwater turtles.

The researchers found that the coolest and the wettest substrates produce 100 percent males compared to 42 percent males from the warmest and driest treatment. They also found that embryonic growth appears to be more sensitive to temperature at earlier stages of development and to moisture at later stages.

"During incubation, the turtle embryo grows inside the nest from a few cells to a fully formed and independent organism at hatching," said Jeanette Wyneken, Ph.D., author of the study and a professor of biological sciences in FAU's Charles E. Schmidt College of Science. "For proper development, embryos require an appropriate range of temperature, moisture, salinity, and respiratory gases." 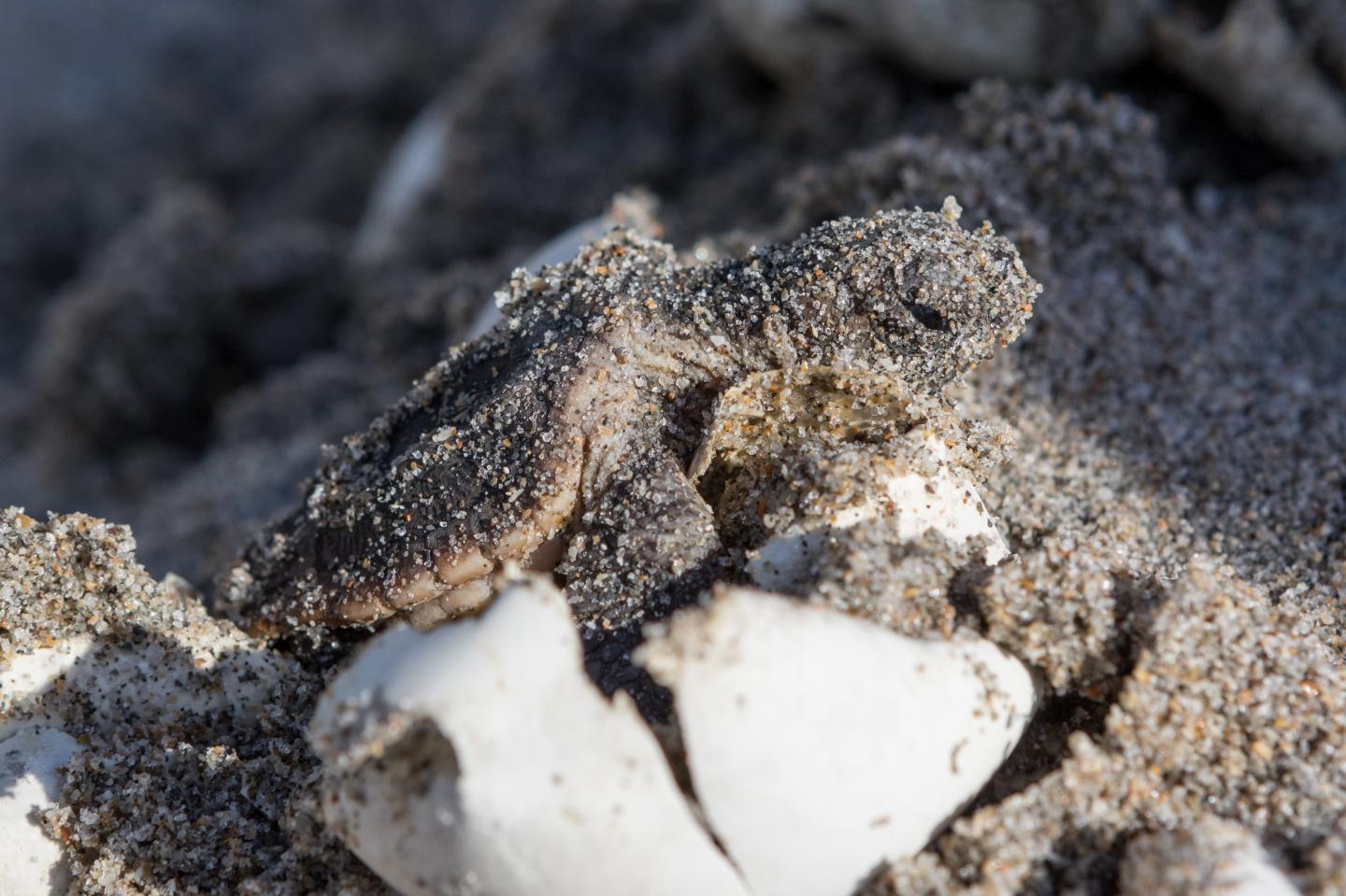 A sea turtle hatchling emerges from an egg on a beach in Palm Beach County in southeast Florida. Since 2002, researchers have found that 97 to 100 percent of the hatchlings have been female.Photo Credit: Jay Paredes, Florida Atlantic University

"We found that development differences were due to moisture interacting with temperature where increased water content of the sand resulted in temperatures that were 2 to 3 degrees Celsius lower than air temperatures," said Wyneken.

For the study, the researchers incubated eggs from the Trachemys scripta elegans, a semi-aquatic turtle, under different temperature and moisture regimes to study the effect of the two environmental factors on developmental rate, egg mass, embryo mass and length, and sex ratio. They monitored embryonic development until stage 22 when their sex is determined. Turtle embryonic development is divided into 27 stages. The pivotal temperature is the constant temperature (29 degrees Celsius or 84.2 degrees Fahrenheit) at which 50:50 sex ratio is expected. Sex ratio was based on expression levels of Sox9 and all data were tested for normality and for homogeneity before statistical analysis.

This laboratory study is consistent with field studies of freshwater turtles and sea turtles. Results of the study also are relevant when considering nesting phenology in the wild because conditions such as temperature and rainfall often vary depending across the nesting season.

"Our study demonstrates how moisture may change the incubation conditions inside nests by changing the temperature experienced by eggs, which affects development, growth and sex ratios," said Wyneken. "Furthermore, results of our study highlight the importance of including moisture conditions when predicting embryo growth and sex ratios and in developing proxies of embryonic development. Improving accuracy is particularly important when trying to assess the impact of climate change in species with temperature-dependent sex determination and other forms of environmental determination."