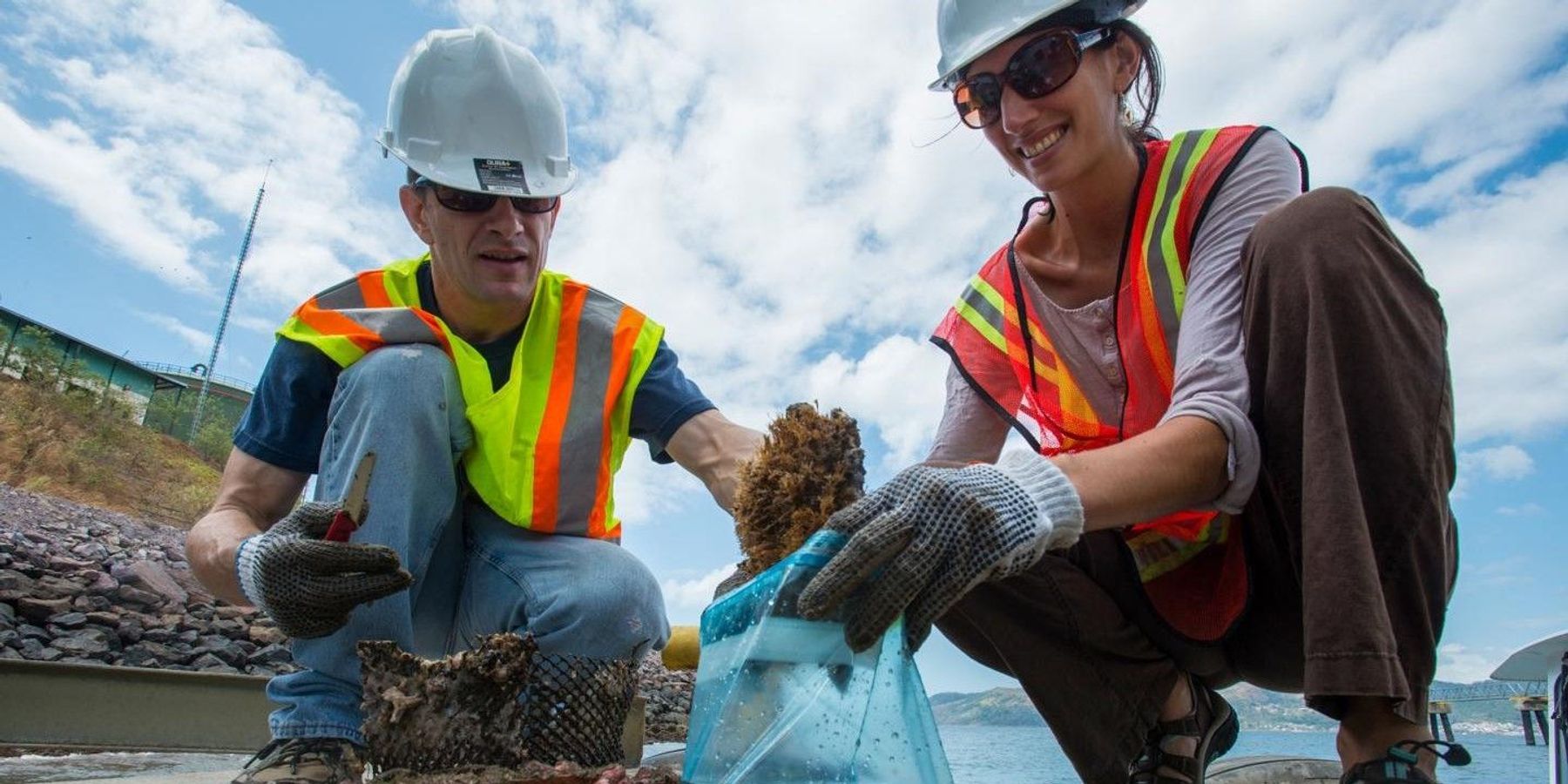 Night and day, oil tankers, yachts, and cargo ships stacked with shipping containers ply the 80-kilometer (50-mile) waterway through the jungles of Panama between the Atlantic and the Pacific Ocean: about 40 ships every 24 hours. But even though the Canal is fed by freshwater rivers that empty through the locks on each end, a system that generally prevents fish and smaller marine invertebrates from hopping from ocean to ocean, some still manage to get through, clinging to the hulls of ships. Other invading species arrive from far-flung ports, dumped with ballast water as ships prepare for transit.

"Panama is a major shipping hub that provides amazing opportunities to test key ideas about marine invasions by studying two very different oceans at the same latitude," said Mark Torchin, staff scientist at the Smithsonian Tropical Research Institute (STRI), "I can check sites in the ocean in front of my lab at the Pacific entrance to the Canal and then drive to the Atlantic coast in an hour to check sites there. Where else in the world can you do that?"

Since the Canal opened in 1914, the human population of the world has catapulted from two billion to almost eight billion. And as people move around the globe, other organisms move as well. Fish breeders in the United States imported carp from Asia to clean their ponds; now Asian Carp have worked their way up the Mississippi River system to Canada, destroying natural bird and fish habitat along the way. Likewise, cane toads were introduced in Australia to control beetles, but because they have no natural predators there, toad numbers exploded. But most invasions are inadvertent, as animals (or viruses, for that matter) hitch rides on boats or planes.

"We have very practical reasons to test ideas about the success of invaders in different locations as we learn how to predict and manage invasions," said Amy Freestone, associate professor at Temple University and research associate at both STRI in Panama and the Smithsonian Environmental Research Center (SERC) in Maryland. "With these paired experimental studies, we wanted to know if marine invaders are equally successful in all environments and how important predators are to keep them in check."

First the team asked whether marine invaders are more successful in one ocean basin compared to the other. Is the proportion of non-native species higher in the less diverse Pacific compared to the more diverse Atlantic as theory predicts? And is there asymmetrical exchange between oceans in Panama, with more species introduced from the Atlantic to Pacific than in the opposite direction?

To find out, they suspended PVC panels as habitat patches for colonization. About the size of patio tiles, panels were placed in the water at 10 different sites near each end of the Panama Canal. They waited for three months for marine invertebrates to colonize the panels. Then they removed these standard collectors, photographed the results and identified the species on the panels, classifying them as either native, non-native, or species of unknown origin.

Along the way they reported nine new non-native sessile invertebrates in the Pacific and seven in the Atlantic that were previously unknown from these areas. One of the important contributions of this project was a collaboration with the Panama Canal Authority (Autoridad del Canal de Panama, ACP) and the Panama Maritime Authority (Autoridad Maritima de Panama, AMP), with support from Panama's Secretariat for Science and Technology (SENACYT) to create an online database called Pan-NEMO of non-native species as part of the National Estuarine and Marine Exotic Species Information System (NEMESIS).

The team also combed through previous scientific papers, pulling together the cumulative record of all non-native marine species reported to date in Panama. They found the same thing: eight times more non-native species were reported from the Pacific than from the Atlantic in this area.

Next they looked for evidence of a concept called biotic resistance, the idea that, in biodiverse environments, it is harder for invaders to gain a foothold because they have to compete with the natives and survive alongside native predators. To test effects of predators, they compared caged and uncaged panels in two companion studies. They suspended uncovered panels, panels with mesh cages to keep predators out, and panels with mesh along the sides but open at one end at three sites per ocean, waited three months, and then identified the invertebrates and weighed them.

Based on the results of the Panama experiments the research team secured funding from the US National Science Foundation to also test the idea that predation is stronger the closer you get to the equator and to find out how it impacts communities of marine invertebrates. To do this, they put out PVC panels, with and without cages at 12 sites in four regions: subarctic, Ketchikan, Alaska; temperate, San Francisco, California; subtropical La Paz, Mexico, and tropical Panama City, Panama.

"These projects not only provide interesting data," said Carmen Schloeder, research manager in the Torchin lab and coauthor of both studies, "but also a great experience working for extended periods of time in different environments with collaborators from many different cultural backgrounds. I'm proud to be part of a diverse core team that includes many women: to be able to work with and learn from inspiring colleagues is an essential part of science."

Results of the second experiment showed that indeed, predators closer to the equator were more diverse, predation rates were higher, predators were larger, and they spent more time interacting with their prey. Predation is a much more important force in the tropics than further north. In the tropics, the effects of predators were obvious: they reduced the biomass on the plates and changed the composition of the organisms. In the North, this didn't happen. Communities of marine invertebrates are hit harder by predators in the tropics.

"We show that predators are a critical component of these marine ecosystems, particularly in the tropics, and can limit the abundance of introduced species," Freestone said. "Protect the predators—that is, protect these diverse environments—and you are protecting the world's oceans from invasions by species that may radically alter the balance of marine ecosystems."