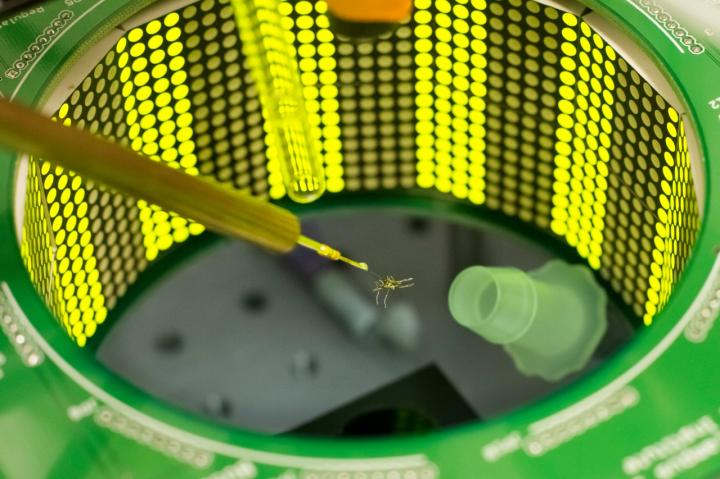 Researchers used an insect flight simulator (pictured here) along with CRISPR gene editing and RNAi techniques to determine that dopamine is a key mediator of aversive learning in mosquitoes.Photo Source: Kiley RiffellYour grandmother's insistence that you receive more bug bites because you're 'sweeter' may not be that far-fetched after all, according to pioneering research from Virginia Tech scientists.

The study, published in the journal Current Biology, shows that mosquitoes can rapidly learn and remember the smells of hosts and that dopamine is a key mediator of this process. Mosquitoes use this information and incorporate it with other stimuli to develop preferences for a particular vertebrate host species, and, within that population, certain individuals.

However, the study also proved that even if an individual is deemed delicious-smelling, a mosquito's preference can shift if that person's smell is associated with an unpleasant sensation. Hosts who swat at mosquitoes or perform other defensive behaviors may be abandoned, no matter how sweet.

Clément Vinauger, an assistant professor of biochemistry in Virginia Tech's College of Agriculture and Life Sciences, and Chloé Lahondère, a research assistant professor in the Department of Biochemistry, demonstrated that mosquitoes exhibit a trait known as aversive learning by training female Aedes aegypti mosquitoes to associate odors (including human body odors) with unpleasant shocks and vibrations.

Twenty-four hours later, the same mosquitoes were assessed in a Y-maze olfactometer in which they had to fly upwind and choose between the once-preferred human body odor and a control odor. The mosquitoes avoided the human body odor, suggesting that they had been successfully trained.

By taking a multidisciplinary approach and using cutting-edge techniques, including CRISPR gene editing and RNAi, the scientists were also able to identify that dopamine is a key mediator of aversive learning in mosquitoes. 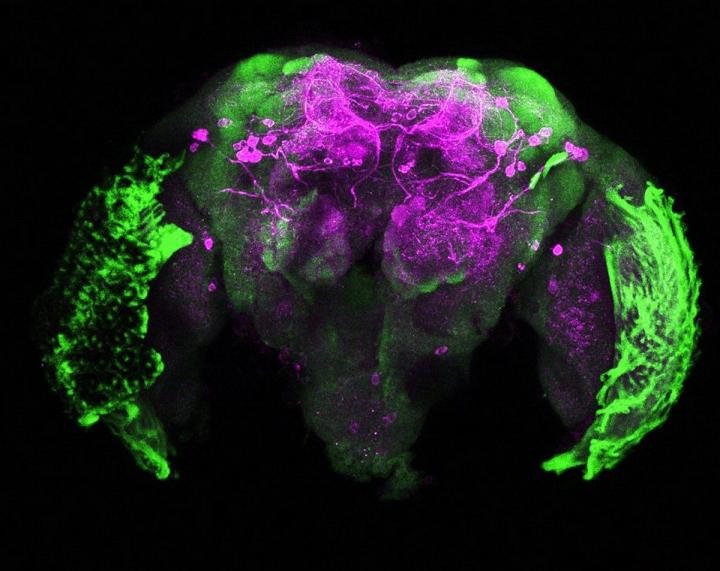 This picture of a mosquito brain highlights the presence of dopamine in regions involved in the sense of smell. The purple areas indicate tyrosine hydroxylase, which is the precursor of dopamine.Image Credit: Gabriella Wolff

For example, they targeted specific parts of the brain involved in olfactory integration by fitting mosquitoes with helmets that allowed for brain activity recordings and observations. By placing mosquitoes in an insect flight simulator and exposing the mosquitoes to various smells, including human body odors, the scientists observed how the insects, trained or not, reacted. What they saw is that the neural activity in the brain region where olfactory information is processed was modulated by dopamine in such a way that odors were easier to discriminate, and potentially learn, by the mosquitoes.

"Unfortunately, there is no way of knowing exactly what attracts a mosquito to a particular human -- individuals are made up of unique molecular cocktails that include combinations of more than 400 chemicals," said Lahondère. "However, we now know that mosquitoes are able to learn odors emitted by their host and avoid those that were more defensive."

"Understanding these mechanisms of mosquito learning and preferences may provide new tools for mosquito control," said Vinauger. "For example, we could target mosquitoes' ability to learn and either impair it or exploit it to our advantage."

Aedes aegypti mosquitoes are vectors for Zika fever, dengue fever, chikungunya, and yellow fever viruses, and can be found in tropical and subtropical regions throughout the world. Vinauger and Lahondère are both affiliated with the university's Fralin Life Science Institute, which supports vector-borne disease research as a major thrust area.