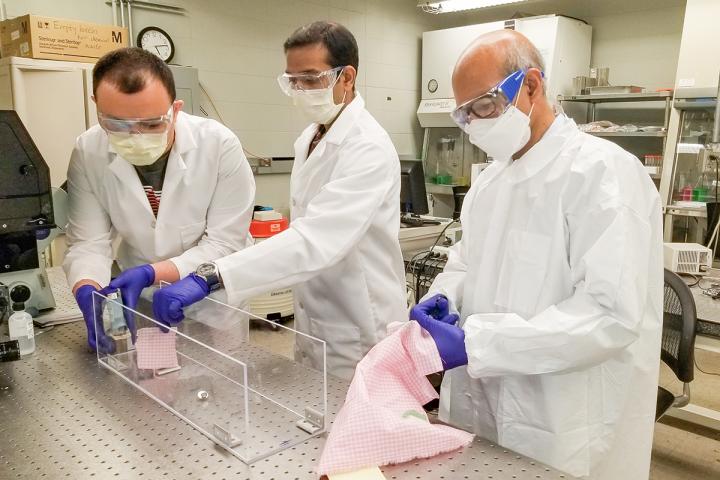 CHAMPAIGN, IL — Studies indicate that homemade masks help combat the spread of viruses like COVID-19 when combined with frequent hand-washing and physical distancing. Many of these studies focus on the transfer of tiny aerosol particles; however, researchers say that speaking, coughing, and sneezing generates larger droplets that carry virus particles. Because of this, mechanical engineer Taher Saif said the established knowledge may not be enough to determine the effectiveness of some fabrics used in homemade masks.

Saif, a mechanical science and engineering professor at the University of Illinois, Urbana-Champaign, led a study that examined the effectiveness of common household fabrics in blocking droplets. The findings are published in the journal Extreme Mechanics Letters.

Aerosol particles are typically classified as less than five micrometers, and lie in the range of hundreds of nanometers. However, larger droplets—up to about one millimeter in diameter—can  also be expelled when an individual speaks, coughs, or sneezes. These larger droplets pose a problem because, with sufficient momentum, they can squeeze through the pores of some fabrics, break into smaller droplets and become airborne.

However, for an individual to feel compelled to wear a mask, it must be comfortable and breathable, the researchers said.

“A mask made out of a low-breathability fabric is not only uncomfortable, but can also result in leakage as the exhaled air is forced out around contours of a face, defeating the purpose of the mask and providing a false sense of protection,” Saif said. “Our goal is to show that many common fabrics exploit the trade-off between breathability and efficiency of blocking droplets—large and small.”

The team tested the breathability and droplet-blocking ability of 11 common household fabrics, using a medical mask as a benchmark. The fabrics selected ranged from new and used garments, quilted cloths, bedsheets, and dishcloth material. The researchers then characterized the fabrics in terms of their construction, fiber content, weight, thread count, porosity, and water-absorption rate.

“Testing the breathability of these fabrics was the easy part,” Saif said. “We simply measured the rate of airflow through the fabric. Testing the droplet-blocking ability is a bit more complicated.”

In the lab, the researchers fill the nozzle of an inhaler with distilled water seeded with easy-to-find 100-nanometer diameter fluorescent particles—which happens to be the size of a novel coronavirus particle. When puffed, the inhaler forces the water through the nozzle and generates high-momentum droplets that collect on a plastic dish placed in front of the inhaler. To test the fabrics, the researchers repeat this process with the various materials placed over the collection dishes. 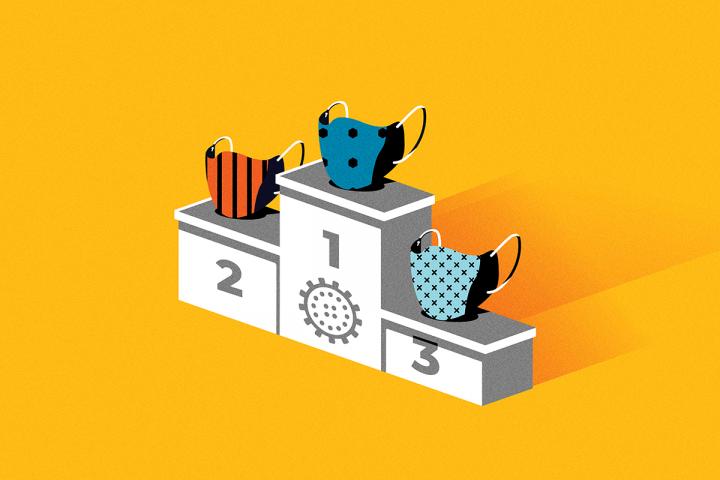 Researchers tested 11 household fabrics that are commonly used for homemade masks and found that all are effective at curbing the small and large respiratory droplets that are released when we speak, cough, or sneeze.
Graphic by Michael Vincent

“We count the number of nanoparticles landing on the dish using a high-resolution confocal microscope. We can then use the ratio of the number collected with and without the fabric to give us a measure of droplet-blocking efficiency,” Saif said.

The team also measured the velocity and size of the particles expelled from the inhaler using high-speed video.

Their analyses revealed that droplets leave the inhaler at about 17 meters per second. Droplets released by speaking, coughing, and sneezing have velocities within the range of 10 to 40 meters per second, the researchers said.

In terms of size, the high-speed video detected droplets with diameters in the 0.1 to one millimeter range, matching that of the larger-sized droplets released by speaking, coughing, and sneezing.

“We found that all of the fabrics tested are considerably effective at blocking the 100 nanometer particles carried by high-velocity droplets similar to those that may be released by speaking, coughing, and sneezing, even as a single layer,” Saif said. “With two or three layers, even the more permeable fabrics, such as T-shirt cloth, achieve droplet-blocking efficiency that is similar to that of a medical mask, while still maintaining comparable or better breathability.

“Our experimental platform offers a way to test fabrics for their blocking efficiency against the small—and now—larger droplets that are released by human respiratory events.”