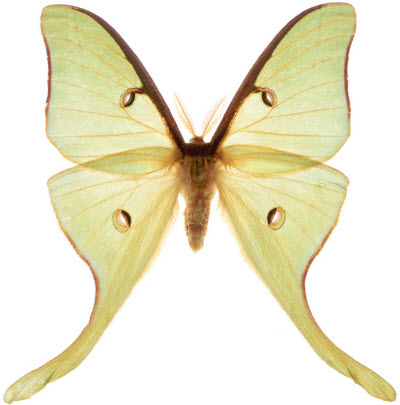 Luna moths evolved long tails to trick bats’ sonar.Florida Museum of Natural History at the University of FloridaThe study appearing in the Proceedings of the National Academy of Sciences shows luna moths spin their trailing hindtails as they fly, confusing the sonar cries bats use to detect prey and other objects.

The collaborative work between University of Florida and Boise State University researchers is a first step in determining why bats are lured into striking a false target. The findings could have implications on sonar development for the military, said Akito Kawahara, assistant curator of Lepidoptera at the Florida Museum of Natural History on the UF campus, who was UF’s research leader on the project.

“This finding expands our knowledge of anti-predator deflection strategies and the extent of a long-standing evolutionary arms race between bats and moths,” Kawahara said.

The study is the first to show that insects use this type of trickery to thwart bats. Other animals also might use acoustic deflection strategies, said lead author Jesse Barber, a biologist at Boise State University.

Using high-speed infrared cameras and ultrasonic microphones, the researchers watched brown bats preying on moths. Luna moths with tails were 47 percent more likely to survive an attack than moths without tails. Bats targeted the tail during 55 percent of the interactions, suggesting the moths may lure bats to the tails to make an attack more survivable.

While more than half of the 140,000 species of nocturnal moths have sonar-detecting ears that provide a similar level of protection, more than 65,000 species lack this defense, Kawahara said.

“When you pit them against bats, bats can’t find the moths. They go to the tail instead of the head,” Kawahara said. “When you look at Lepidoptera collections, you see moths with really short tails and some with extremely long tails. This also is an example of the important role biological collections serve as repositories of patterns and processes of biodiversity.”

“Most people focus on the beautiful things that are around us during the day, but there’s spectacular diversity in the places we cannot easily see, like in the soil, in the deep ocean, or in the night sky —places we really don’t really often think about,” Kawahara said. “Understanding nocturnal animal interactions is essential at a time when human activities are having major impacts on the natural world.”