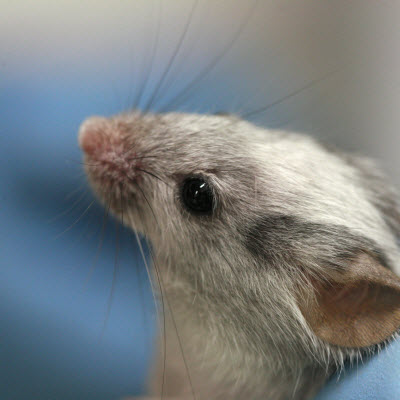 Duke researchers have developed a new mouse model that could help autism researchers discover new treatments for humans with the disorder.Photo credit: Rama, Wikimedia CommonsA new mouse model of a genetically-linked type of autism reveals more about the role of genes in the disorder and the underlying brain changes associated with autism’s social and learning problems.

Scientists at Duke Health who developed the new model also discovered that targeting a brain receptor in mice with this type of autism could ease repetitive behaviors and improve learning in some animals.

Their report, published May 10 in the journal Nature Communications, suggests that among more than a dozen different lines of mice developed around the world to mirror autism caused by mutations to the SHANK3 gene, Duke researchers are the first to create a mouse in which that gene has been completely eliminated.

The total “knockout” of the gene makes the model more effective for studying SHANK3-related autism and Phelan-McDermid syndrome in humans, many of whom are missing the gene completely, said senior author Yong-hui Jiang, MD, PhD, an associate professor of pediatrics and neurobiology.

“This is an important first step in understanding the process of the disorder in humans,” Jiang said. “For many families affected by autism, this is something that could provide hope and potentially lead to a treatment.”

SHANK3 is essential to the function of synapses in the brain and communication between neurons.

Jiang said autism researchers worldwide could use the mouse model to study ways to compensate for the gene and improve symptoms in people with autism spectrum disorders and Phelan-McDermid Syndrome, a more profound developmental condition caused by mutations to SHANK3 and other genes in chromosome 22.

Over the past five years, researchers observed abnormal brain activity in the SHANK3 knockout mice when compared to controls. The knockout mice would vocalize less, groom obsessively to the point of losing fur, fail to heed the established social hierarchy in groups, and were often unable to locate their own homes, wandering into strangers’ nests.

“Some of the repetitive behaviors, inability to read social cues, and restricted interests copy many of the symptoms we see in people with autism,” said co-lead author Alexandra Bey, an MD/PhD candidate at the Duke University School of Medicine. Scientists at the University of North Carolina-Chapel Hill and Fudan University in Shanghai also contributed to the report.

In one experiment, mice were placed in a box with numerous holes and paths to explore. Curious control mice roamed while knockout mice often stuck to a small area and repeated the same routes.

“This replicates what see in many children with autism,” Bey said. “In children, perseveration is a behavior such as playing with the same toy over and over again in the same way, and not exploring new ways to interact with it.”

As they studied brain activity in the knockout mice, the researchers also found prominent changes in a receptor in the brain known as mGluR5 and other proteins that support the function of neurons and synapses, said co-lead author Xiaoming Wang, MD, PhD, senior research associate in Duke’s department of pediatrics. The team tested two chemical compounds that target the mGluR5 receptor and found they could actually relieve the animals of some of their repetitive habits or enhance their learning.

“The regulation of this receptor is complex and gives rise to other behavioral challenges, but this is a clue for further research,” Wang said. “In the future, it’s possible that a similar class of drug could be tried on humans. We are interested to see our study help others around the world better understand this gene and how it affects synapses and hope the model can be generalized to other autism genes.”