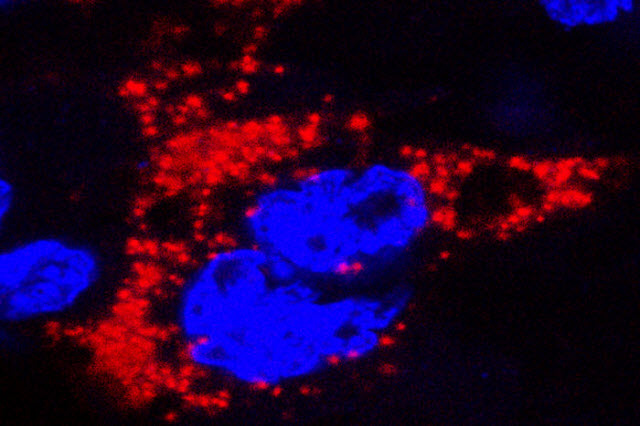 Two mouse models of Zika virus infection in pregnancy were developed by researchers at Washington University School of Medicine in St. Louis. In this photo, Zika virus, marked with red, infects a mouse placenta. The nuclei of the placental cells are marked blue.Image credit: BIN CAO

Two mouse models of Zika virus infection in pregnancy have been developed by a team of researchers at Washington University School of Medicine in St. Louis. In them, the virus migrated from the pregnant mouse’s bloodstream into the placenta, where it multiplied, then spread into the fetal circulation and infected the brains of the developing pups.

The models provide a basis to develop vaccines and treatments and to study the biology of Zika virus infection in pregnancy.

The research is published May 11 in Cell. 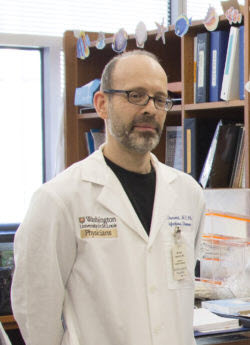 Virologist Michael Diamond, MD, PhD, is one of the leaders of a team that developed two mouse models of Zika virus infection in pregnant mice.Photo credit: E. HOLLAND DURANDO“This is the first demonstration in an animal model of in utero transmission of Zika virus, and it shows some of the same outcomes we’ve been seeing in women and infants,” said co-senior author Michael Diamond, MD, PhD, a professor of medicine, molecular microbiology, and pathology and immunology. “This could be used in vaccine trials, to find out whether vaccinating the mother can protect against uterine infection. You also could test therapeutics, once a mother is infected, to see if they could arrest the transmission to the fetus or prevent damage to the fetus.”

Since mice with normal immune systems are able to fight off Zika infection, Diamond and colleagues weakened the mice’s immune systems before infecting them with the virus.

In one model, the researchers genetically modified mice to lack a molecule called interferon alpha receptor, which plays a key role in the immune response to viral infections. In the other model, they injected mice with antibodies against the molecule.

The scientists infected pregnant mice with Zika virus about a week after conception and examined their placentas and fetuses six to nine days later.  Both mouse models reflected some of the key aspects of human Zika infection. In the mice, as in humans, the virus crossed from the mother’s bloodstream into the fetus’s and infected the developing brain, where damage to neurons was observed.

Microcephaly—which is marked by abnormally small heads, the most striking result of human infection—was not observed in either model. This may be due to differences in how mouse and human brains develop.

“Unlike in humans, a significant amount of neurodevelopment in mice actually occurs after birth, especially in the cerebral cortex, which is the part of the brain damaged in microcephaly,” Diamond said. 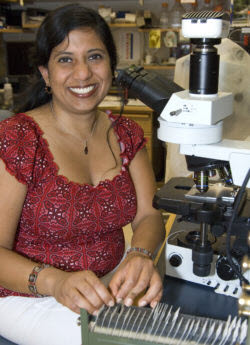 Indira Mysorekar, PhD, who studies fetal infections, teamed up with virologist Michael Diamond to develop mouse models of Zika virus infection during pregnancy.Photo credit: ROBERT BOSTONIndira Mysorekar, PhD, co-senior author of the study, and postdoctoral fellow Bin Cao, PhD, co-first author, found the virus in the placenta at 1,000 times the concentration in the maternal blood, suggesting that it had not just migrated to the placenta but had multiplied there.

In the genetically modified mice, Zika infection caused the death of most of the fetuses, and the remaining fetuses were much smaller than normal. The placentas showed damage: They were shrunken, with a reduced number of blood vessels. Such placentas would be unable to supply enough oxygen and nutrients to a developing fetus, a condition known as placental insufficiency, which causes abnormally slow fetal growth and, in severe cases, fetal death.

Placental insufficiency, abnormally small fetuses, and miscarriages have been reported in pregnant women infected with Zika virus, as well.

In both models, the virus also was detected in the fetal brain. The researchers observed cell death in the brains of infected fetuses, but there were no obvious abnormalities in the overall structure of the brain.

In the model in which mice were injected with antibodies, the effect of Zika infection was less severe. The fetuses survived, although some were smaller than normal. Diamond and colleagues plan to use this model to study whether prenatal Zika virus infection causes long-term neurological problems in pups born without obvious brain damage.

Not all babies born to women infected with Zika during pregnancy develop microcephaly; some seem healthy at birth. But it is unknown whether such babies will face developmental or intellectual challenges as they grow up.

Diamond and Mysorekar, an associate professor of obstetrics and gynecology, and of pathology and immunology, also want to identify the molecules the virus latches onto to get into and through the placenta, so they can block them. Zika’s greatest health threat is to developing fetuses; if that threat can be eliminated, the public health emergency would be significantly lessened.

“For years, we’ve been studying transplacental infections and what prevents them,” Mysorekar said. “It’s gratifying to be able to apply all that expertise to something that’s suddenly become very important around the world.”

COVID-19 in Pregnant Women: Effects on Placenta and Fetus

COVID-19 in Pregnant Women: Effects on Placenta and Fetus