There are significant cortical thickness differences among the three groups. All regions survived clusterwise-correction (p<0.001).Image Credit: Radiological Society of North AmericaCHICAGO - Researchers using MRI have discovered a common pattern of structural abnormalities in the brains of people with depression and social anxiety, according to a study presented being next week at the annual meeting of the Radiological Society of North America (RSNA).

Major depressive disorder (MDD), often simply referred to as depression, is a serious condition. The condition can have a debilitating effect on an individual's life. People with MDD often lose interest in activities they once enjoyed and sometimes find it difficult just to get out of bed. At times, they may feel suicidal. About 16 million Americans have MDD.

Social anxiety disorder, or SAD, is an intense fear of being watched and judged by others. Symptoms can be extreme enough to interfere with daily activities. People with this disorder have difficulty developing and maintaining social and romantic relationships. About 15 million American adults have social anxiety disorder.

Both conditions share some clinical symptoms, suggesting the two disorders may have similar brain mechanisms. However, few studies have directly compared the brain structural effects of the two disorders, said the author of the new study, Youjin Zhao M.D., Ph.D., from SiChuan University in Chengdu, China.

Dr. Zhao and co-author Su Lui, M.D., used MRI to assess alterations in the brain's gray matter among MDD and SAD patients. They focused on the thickness of the cortex, which is the outer layer of the cerebrum, or principal part of the brain.

The researchers acquired and analyzed high-resolution images from 37 MDD patients, 24 SAD patients and 41 healthy control individuals. Both MDD and SAD patients, relative to healthy controls, showed gray matter abnormalities in the brain's salience and dorsal attention networks. The salience network is a collection of brain regions that determine which stimuli are deserving of our attention, while the dorsal attention network plays an important role in focus and attentiveness.

It is still unclear exactly what the relationship is between the clinical manifestations of MDD and SAD and cortical thickening in brain regions like the anterior cingulate cortex, a part of the brain associated with emotion, Dr. Zhao said.

"First, it is possible that a greater cortical thickness may reflect a compensatory mechanism that is related to inflammation or other aspects of the pathophysiology," she said. "Second, greater anterior cingulate cortical thickness could be the result of both the continuous coping efforts and emotion regulation attempts of MDD and SAD patients." 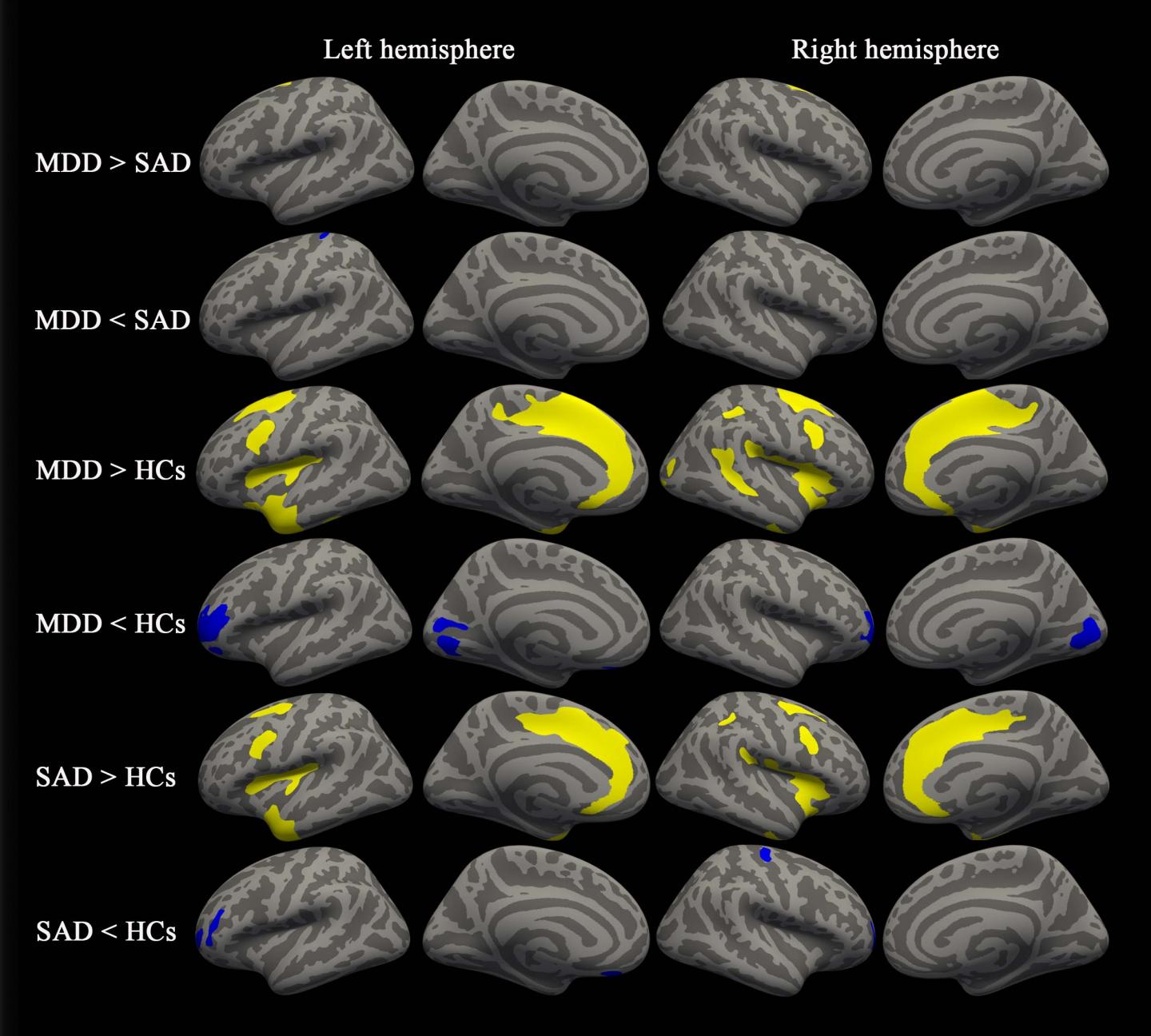 The researchers also found disorder-specific involvement of the brain's "fear circuitry" in patients with SAD and involvement of the visual recognition network in patients with MDD. Alterations in the brain within the region of the visual recognition network might be related to impaired selective attention and working memory in MDD, Dr. Zhao indicated.

"The visual recognition network is involved in emotional facial processing, which is crucial for social functioning," she said. "Depression has been associated with structural alterations in these regions."