Electronic data is being produced at a breathtaking rate.

The total amount of data stored in data centers around the globe is of the order of 10 zettabytes (a zettabyte is a trillion gigabytes), and we estimate that amount doubles every couple of years.

With eight percent of global electricity already being consumed in information and communication technology (ICT), low-energy data-storage is a key priority.

To date there is no clear winner in the race for next-generation memory that is non-volatile, has great endurance, highly energy efficient, low cost, high density, and allows fast access operation.

Multi-state memory: more than just zeroes and ones 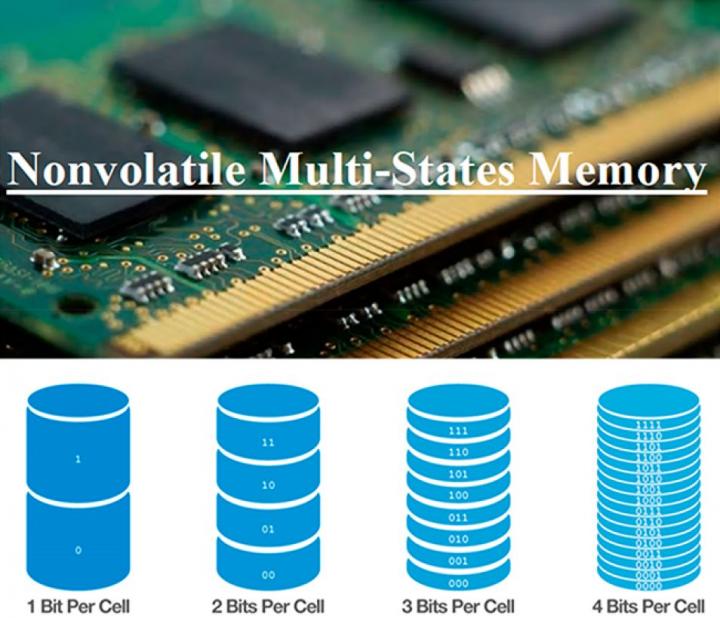 Storage of four bits per cell increases memory capacity by a factor of two to the power of four (ie, 16).
FLEET

Multi-state memory is an extremely promising technology for future data storage, with the ability to store data in more than a single bit (ie, 0 or 1) allowing much higher storage density (amount of data stored per unit area.

This circumvents the plateauing of benefits historically offered by 'Moore's Law', where component size halved about every two years. In recent years, the long-predicted plateauing of Moore's Law has been observed, with charge leakage and spiraling research and fabrication costs putting the nail in the Moore's Law coffin.

Storage density is dramatically enhanced without scaling down the dimensions of the memory cell, making memory devices more efficient and less expensive.

Multi-state memory also enables the proposed future technology neuromorphic computing, which would mirror the structure of the human brain. This radically-different, brain-inspired computing regime could potentially provide the economic impetus for adoption of a novel technology such as NMSM.

NMSMs allow analog calculation, which could be vital to intelligent, neuromorphic networks, as well as potentially helping us finally unravel the working mechanism of the human brain itself.

- This press release was originally published on the FLEET website