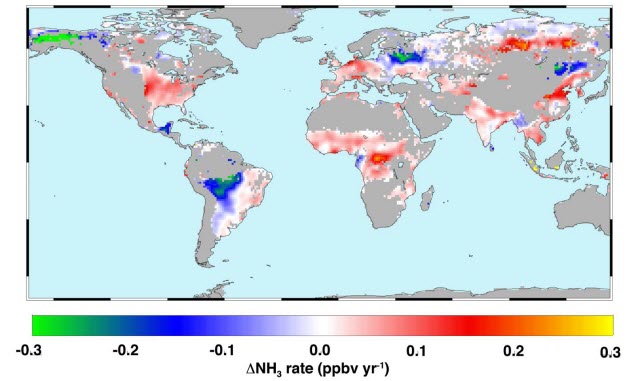 This map shows global trends in atmospheric ammonia (NH3) as measured from space from 2002 to 2016. Hot colors represent increases due to a combination of increased fertilizer application, reduced scavenging by acid aerosols, and climate warming. Cool colors represent decreases due to reduced agricultural burning or fewer wildfires.Image credit: Juying Warner/GRL

The first global, long-term satellite study of airborne ammonia gas has revealed "hotspots" of the pollutant over four of the world's most productive agricultural regions. Using data from NASA's Atmospheric Infrared Sounder (AIRS) satellite instrument, the University of Maryland-led research team discovered steadily increasing ammonia concentrations from 2002 to 2016 over agricultural centers in the United States, Europe, China, and India. Increased atmospheric ammonia is linked to poor air and water quality.

The study, published March 16, 2017 in the journal Geophysical Research Letters, also describes the probable causes for increased airborne ammonia in each region. Although the specifics vary between areas, the increases in ammonia are broadly tied to crop fertilizers, livestock animal wastes, changes to atmospheric chemistry, and warming soils that retain less ammonia. The results could help illuminate strategies to control pollution from ammonia and ammonia byproducts near agricultural areas.

"Our study reports the first global, long-term trends of atmospheric ammonia from space," said Juying Warner, as associate research scientist in atmospheric and oceanic science at UMD. "Measuring ammonia from the ground is difficult, but the satellite-based method we have developed allows us to track ammonia efficiently and accurately. We hope that our results will help guide better management of ammonia emissions."

Gaseous ammonia is a natural part of Earth's nitrogen cycle, but excess ammonia is harmful to plants and reduces air and water quality. In the troposphere—the lowest, densest part of the atmosphere where all weather takes place and where people live—ammonia gas reacts with nitric and sulfuric acids to form nitrate-containing particles that contribute to aerosol pollution that is damaging to human health. Ammonia gas can also fall back to Earth and enter lakes, streams, and oceans, where it contributes to harmful algal blooms and "dead zones" with dangerously low oxygen levels.

"Little ammonia comes from tailpipes or smokestacks. It's mainly agricultural, from fertilizer and animal husbandry," said Russell Dickerson, a professor of atmospheric and oceanic science at UMD. "It has a profound effect on air and water quality—and ecosystems. Here in Maryland, ammonia from the atmosphere contributes as much as a quarter of the nitrogen pollution in the Chesapeake Bay, causing eutrophication and leading to dead zones that make life very difficult for oysters, blue crabs, and other wildlife."

Each major agricultural region highlighted in the study experienced a slightly different combination of factors that correlate with increased ammonia in the air from 2002 to 2016.

The United States, for example, has not experienced a dramatic increase in fertilizer use or major changes in fertilizer application practices. But Warner, Dickerson and their colleagues found that successful legislation to reduce acid rain in the early 1990s most likely had the unintended effect of increasing gaseous ammonia. The acids that cause acid rain also scrub ammonia gas from the atmosphere, and so the sharp decrease in these acids in the atmosphere is the most plausible explanation for the increase in ammonia over the same time frame.

Europe experienced the least dramatic increase in atmospheric ammonia of the four major agricultural areas highlighted by the study. The researchers suggest this is due in part to successful limits on ammonia-rich fertilizers and improved practices for treating animal waste. Much like the United States, a major potential cause for increased ammonia traces back to reductions in atmospheric acids that would normally remove ammonia from the atmosphere.

"The decrease in acid rain is a good thing. Aerosol loading has plummeted—a substantial benefit to us all," Dickerson said. "But it has also increased gaseous ammonia loading, which we can see from space."

In China, a complex interaction of factors is tied to increased atmospheric ammonia. The study authors suggest that efforts to limit sulfur dioxide—a key precursor of sulfuric acid, one of the acids that scrubs ammonia from the atmosphere—could be partially responsible. But China has also greatly expanded agricultural activities since 2002, widening its use of ammonia-containing fertilizers and increasing ammonia emissions from animal waste. Warming of agricultural soils, due at least in part to global climate change, could also contribute.

"The increase in ammonia has spiked aerosol loading in China. This is a major contributor to the thick haze seen in Beijing during the winter, for example," Warner said. "Also, meat is becoming a more popular component of the Chinese diet. As people shift from a vegetarian to a meat-based diet, ammonia emissions will continue to go up."

In India, a broad increase in fertilizer use coupled with large contributions from livestock waste have resulted in the world's highest concentrations of atmospheric ammonia. But the researchers note that ammonia concentrations have not increased nearly as quickly as over other regions. The study authors suggest that this is most likely due to increased emissions of acid rain precursors and, consequently, some increased scrubbing of ammonia from the atmosphere. This leads to increased levels of haze, a dangerous trend confirmed by other NASA satellite instruments, Dickerson said.

In all regions, the researchers attributed some of the increase in atmospheric ammonia to climate change, reflected in warmer air and soil temperatures. Ammonia vaporizes more readily from warmer soil, so as the soils in each region have warmed year by year, their contributions to atmospheric ammonia have also increased since 2002.

The study also ascribes some fluctuations in ammonia to wildfires, but these events are sporadic and unpredictable. As such, the researchers excluded wildfires in their current analysis.

"This analysis has provided the first evidence for some processes we suspected were happening in the atmosphere for some time," Warner said. "We would like to incorporate data from other sources, such as the Joint Polar Satellite System, in future studies to build a clearer picture."

Warner, Dickerson and their colleagues hope that a better understanding of atmospheric ammonia will help policy makers craft approaches that better balance the high demand for agriculture with the need for environmental protection.

"As the world's population grows, so does the demand for food—especially meat," Dickerson said. "This means farmers and ranchers need more fertilizer, which makes it harder to maintain clean air and water. Wise agricultural practices and reduced greenhouse gas emissions can help avoid adverse effects." 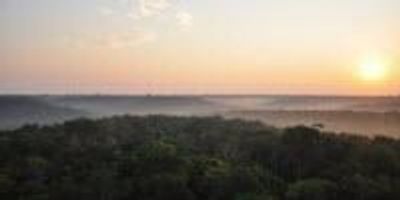 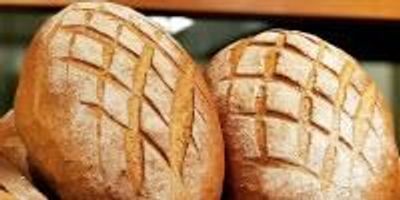 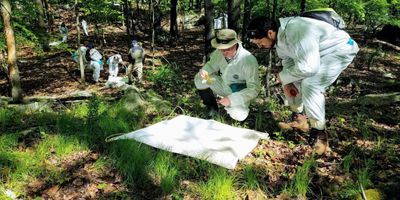 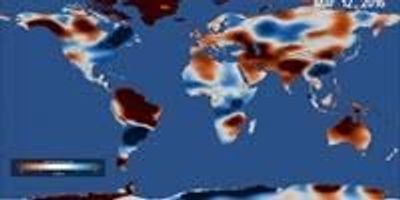 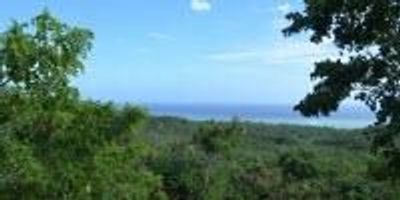